September 21, 2010 at 5:17 PM ET by Jesse Lee
Twitter Facebook Email
Summary:
The Vice President was also present as the President awarded Chief Master Sergeant Richard L. Etchberger, U.S. Air Force, the Medal of Honor for conspicuous gallantry. Chief Etchberger received the Medal of Honor posthumously for his heroic actions in combat on March 11, 1968, in the country of Laos.
[[nid:21049]]

THE PRESIDENT:  Please be seated.  Good afternoon, and on behalf of Michelle and myself, welcome to the White House.  And I thank you, General Cyr, for that wonderful invocation.

Of all the military decorations that our nation can bestow, the highest is the Medal of Honor.  It is awarded for conspicuous gallantry; for risking one’s life in action; for serving above and beyond the call of duty.  Today, we present the Medal of Honor to an American who displayed such gallantry more than four decades ago —- Chief Master Sergeant Richard L. Etchberger.

This medal reflects the gratitude of an entire nation.  So we are also joined by Vice President Biden and members of Congress, including Congressman Earl Pomeroy and —- from Chief Etchberger’s home state of Pennsylvania -— Congressman Tim Holden.

I want to acknowledge a group of Americans who understand the valor we recognize today, because they displayed it themselves —- members of the Medal of Honor Society.  Most of all, we welcome Dick Etchberger’s friends and family -— especially his brother Robert, and Dick’s three sons, Steve, Richard and Cory.

For the Etchberger family, this is a day more than 40 years in the making.  Cory was just nine years old, but he can still remember that winter in 1968 when he, his brothers and his mom were escorted to the Pentagon.  The war in Vietnam was still raging.  Dick Etchberger had given his life earlier that year.  Now his family was being welcomed by the Air Force Chief of Staff.

In a small, private ceremony, Dick was recognized with the highest honor that the Air Force can give —- the Air Force Cross. These three sons were told that their dad was a hero -- that he had died while saving his fellow airmen.  But they weren’t told much else.  Their father’s work was classified, and for years, that’s all they really knew.

Dick Etchberger was a radar technician and he had been hand-picked for a secret assignment.  With a small team of men, he served at the summit of one of the tallest mountains in Laos -— more than a mile high, literally above the clouds.  They manned a tiny radar station, guiding American pilots in the air campaign against North Vietnam.

Dick and his crew believed they could help turn the tide of the war, perhaps even end it.  And that’s why North Vietnamese forces were determined to shut it down.  They sent their planes to strafe the Americans as they worked.  They moved in their troops.  And eventually, Dick and his team could look through their binoculars and see that their mountain was surrounded by thousands of North Vietnamese troops.

Dick and his crew at that point had a decision to make —- ask to be evacuated or continue the mission for another day.  They believed that no one could possibly scale the mountain’s steep cliffs.  And they believed in their work.  So they stayed.  They continued their mission.

As a technician, he had no formal combat training.  In fact, he had only recently been issued a rifle.  But Dick Etchberger was the very definition of an NCO —- a leader determined to take care of his men.  When the enemy started moving down the rocks, Dick fought them off.  When it looked like the ledge would be overrun, he called for air strikes, within yards of his own position, shaking the mountain and clearing the way for a rescue.  And in the morning light, an American helicopter came into view.

Richard Etchberger lived the Airman’s Creed —- to never leave an airman behind, to never falter, to never fail.  So as the helicopter hovered above and lowered its sling, Dick loaded his wounded men, one by one, each time exposing himself to enemy fire.  And when another airman suddenly rushed forward after eluding the enemy all night, Dick loaded him, too —- and finally, himself.  They had made it off the mountain.

That’s when it happened.  The helicopter began to peel away.  A burst of gunfire erupted below.  Dick was wounded.  And by the time they landed at the nearest base, he was gone.

Of those 19 men on the mountain that night, only seven made it out alive.  Three of them owed their lives to the actions of Dick Etchberger.  Today, we’re honored to be joined by one of them —- Mr. John Daniel.

Among the few who knew of Dick’s actions, there was a belief that his valor warranted our nation’s highest military honor.  But his mission had been a secret.  And that’s how it stayed for those many years.  When their father’s mission was finally declassified, these three sons learned something else.  It turned out that their mother had known about Dick’s work all along.  But she had been sworn to secrecy.  And she kept that promise —- to her husband and her country —- all those years, not even telling her own sons.  So today is also a tribute to Catherine Etchberger, and a reminder of the extraordinary sacrifices that our military spouses make on behalf of our nation.

This story might have ended there —- with a family finally knowing the truth.  And for another two decades, it did.  But today also marks another chapter in a larger story of our nation finally honoring that generation of Vietnam veterans who served with dedication and courage but all too often were shunned when they came home, which was a disgrace that must never happen again.

A few years ago, an airman who never even knew Dick Etchberger read about his heroism and felt he deserved something more.  So he wrote his congressman, who made it his mission to get this done.  Today we thank that airman, retired Master Sergeant Robert Dilley, and that congressman, Earl Pomeroy, who along with Congressman Holden made this day possible.

Sadly, Dick’s wife Catherine did not live to see this moment.  But today Steve and Richard and Cory —- today your nation finally acknowledges and fully honors your father’s bravery.  Because even though it has been 42 years, it’s never too late to do the right thing.  And it’s never too late to pay tribute to our Vietnam veterans —- and their families.

In recent years, Dick’s story has become known and Air Force bases have honored him with streets and buildings in his name.  And at the base where he trained so long ago in Barksdale -- Barksdale in Louisiana, there is a granite monument with an empty space next to his name -- and that space can finally be etched with the words “Medal of Honor.”

But the greatest memorial of all to Dick Etchberger is the spirit that we feel here today, the love that inspired him to serve -- love for his country and love for his family.  And most eloquent -- the most eloquent expression of that devotion are the words that he wrote himself, to a friend back home just months before he gave his life to our nation.

“I hate to be away from home,” he wrote from that small base above the clouds, “but I believe in the job.”  He said, “It is the most challenging job I’ll ever have in my life.”  And then he added, “I love it.”

Our nation endures because there are patriots like Chief Master Sergeant Richard Etchberger —- and our troops who are serving as we speak -- who love this nation and defend it.  Their legacy lives on because their families and fellow citizens preserve it.  And as Americans, we remain worthy of their example only so long as we honor it —- not merely with the medals that we present, but by remaining true to the values and freedoms for which they fight.

So please join me in welcoming Steve, Richard and Cory for the reading of the citation.  (Applause.)

MILITARY AIDE:  The President of the United States of America, authorized by Act of Congress, March 3, 1863, has awarded, in the name of The Congress, the Medal of Honor to Chief Master Sergeant Richard L. Etchberger, United States Air Force, for conspicuous gallantry and intrepidity at the risk of life above and beyond the call of duty.

On that day, Chief Etchberger and his team of technicians were manning a top-secret defensive position at Lima Site 85 when the base was overrun by an enemy ground force.  Receiving sustained and withering heavy artillery attacks directly upon his unit’s position, Chief Etchberger’s entire crew lay dead or severely wounded.  Despite having received little or no combat training, Chief Etchberger single-handedly held off the enemy with an M-16, while simultaneously directing air strikes into the area and calling for air rescue.  Because of his fierce defense and heroic and selfless actions, he was able to deny the enemy access to his position and save the lives of his remaining crew. With the arrival of the rescue aircraft, Chief Etchberger, without hesitation, repeatedly and deliberately risked his own life, exposing himself to heavy enemy fire in order to place three surviving wounded comrades into rescue slings hanging from the hovering helicopter waiting to airlift them to safety.  With his remaining crew safely aboard, Chief Etchberger finally climbed into an evacuation sling himself, only to be fatally wounded by enemy ground fire as he was being raised into the aircraft.

Chief Etchberger’s bravery and determination in the face of persistent enemy fire and overwhelming odds are in keeping with the highest standards of performance and traditions of military service.  Chief Etchberger’s gallantry, self-sacrifice, and profound concern for his fellow men at risk of his life, above and beyond the call of duty, reflect the highest credit upon himself and the United States Air Force.

(The Medal is of Honor is presented.)  (Applause.) 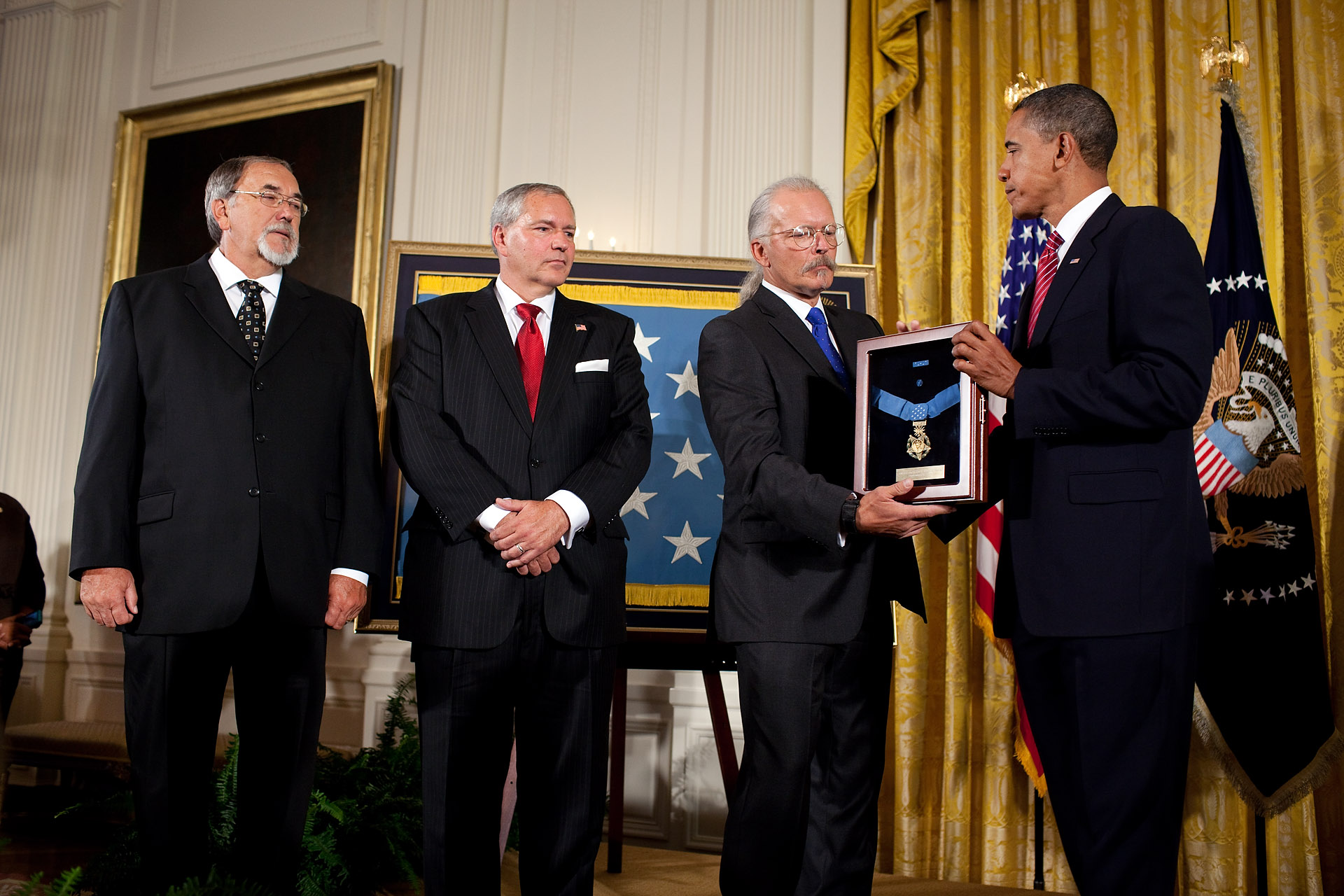 President Barack Obama presents the Medal of Honor posthumously to the sons of Air Force Chief Master Sgt. Richard L. Etchberger, from left, Steve Wilson, Corey Etchberger, and Richard Etchberger, during a ceremony in the East Room of the White House, Sept. 21, 2010. Etchberger received the Medal of Honor for his heroic actions in combat in Laos on March 11, 1968, after deliberately exposing himself to enemy fire in order to place three surviving wounded comrades in rescue slings permitting them to be airlifted to safety. (Official White House Photo by Pete Souza)