A Backyard Discussion on the Patient's Bill of Rights

September 22, 2010 at 4:08 PM ET by Jesse Lee
Twitter Facebook Email
Summary:
The President spends some time in a backyard in Falls Church, Virginia talking to some middle class folks about their experiences with health care reform as the Patient's Bill of Rights goes into effect.

This morning we launched a new section of WhiteHouse.gov dedicated to health reform, a key feature of which is the interactive map with 50 stories from 50 states, giving a snapshot of the kinds of working people all across American who are just starting to get benefits from health care reform.  A lot of these people, like Gail from New Hampshire whose surprise call from the President was caught in the video below, are benefiting from a series of changes going into full effect this week that have been called the Patient's Bill of Rights.  These changes include things like ending discrimination based on pre-existing conditions in kids, allowing kids to stay on their parents' plans until they're 26, making sure you don't lose coverage just for being sick, an end to lifetime limits and much more.

Gail joined the President in a backyard in Falls Church, Virginia to talk to some other middle class folks about their experiences.  One of them was Dawn from Florida:

MS. JOSEPHSON:  Thank you.  I’m Dawn Josephson from Jacksonville, Florida.  And I’ve been a self-employed entrepreneur since 1998.  During that time, the majority of those years I didn’t even have insurance, because it was simply too expensive.  In 2006, my son Wesley was born.  This is Wesley.

THE PRESIDENT:  Hey, Wes.  Come on over here.

THE PRESIDENT:  This is Wesley here.

MS. JOSEPHSON:  That’s Wesley.  He was born in 2006, and that’s when we got -- we finally got health insurance.  We’ve had a few different policies over the years, always had something excluded from it -- even something as silly as ear infections.  What kid does not get ear infections?  So, I mean, silly stuff.

In July of ‘09, he had eye surgery.  We discovered he had sudden onset of a condition called strabismus in the eyes, and his right eye needed surgery.  So we had the surgery, and less than a year later we said we needed new insurance.  What we had was killing us for our premium.  And this was right around the time -- right after the act passed.

The insurance company gave us an affordable rate -- we were looking for a very affordable plan.  And when she told us we were approved, my immediate response was, “But what’s not covered?”  And I knew full well we were going to have an exclusion for my son’s eye.  And she said, “You’re covered.  Nothing is not covered.”  And I said, “Okay, I’m not being very clear here with my questioning.  What about my son?” She said, “Yes, your son is covered.”  I said, “No, you don’t understand.  What if he needs another surgery on his eye?  Are you going to pay for it?”  They said, “Yes, he’s covered.”  And I was shocked.  And she said, “We can no longer exclude preexisting conditions for children.”

And it didn’t hit me until later that night when I was talking with my husband as to why she said that, and we started talking about it.  And I said, wow, something affected me personally from the government -- was really shocking.

So not only do we have a more affordable plan, but my son is now covered no matter what happens.  It is routine for children with strabismus to need multiple surgeries.  And I know now that that’s not going to have to come out of our pocket, which was a big fear.  So we’re very thankful and very grateful.  Thank you so much for everything you’ve done, President Obama, and everything that you’ve -- everyone has done to push this through because it’s really made our life so much less stressful.  It’s just an average American family. 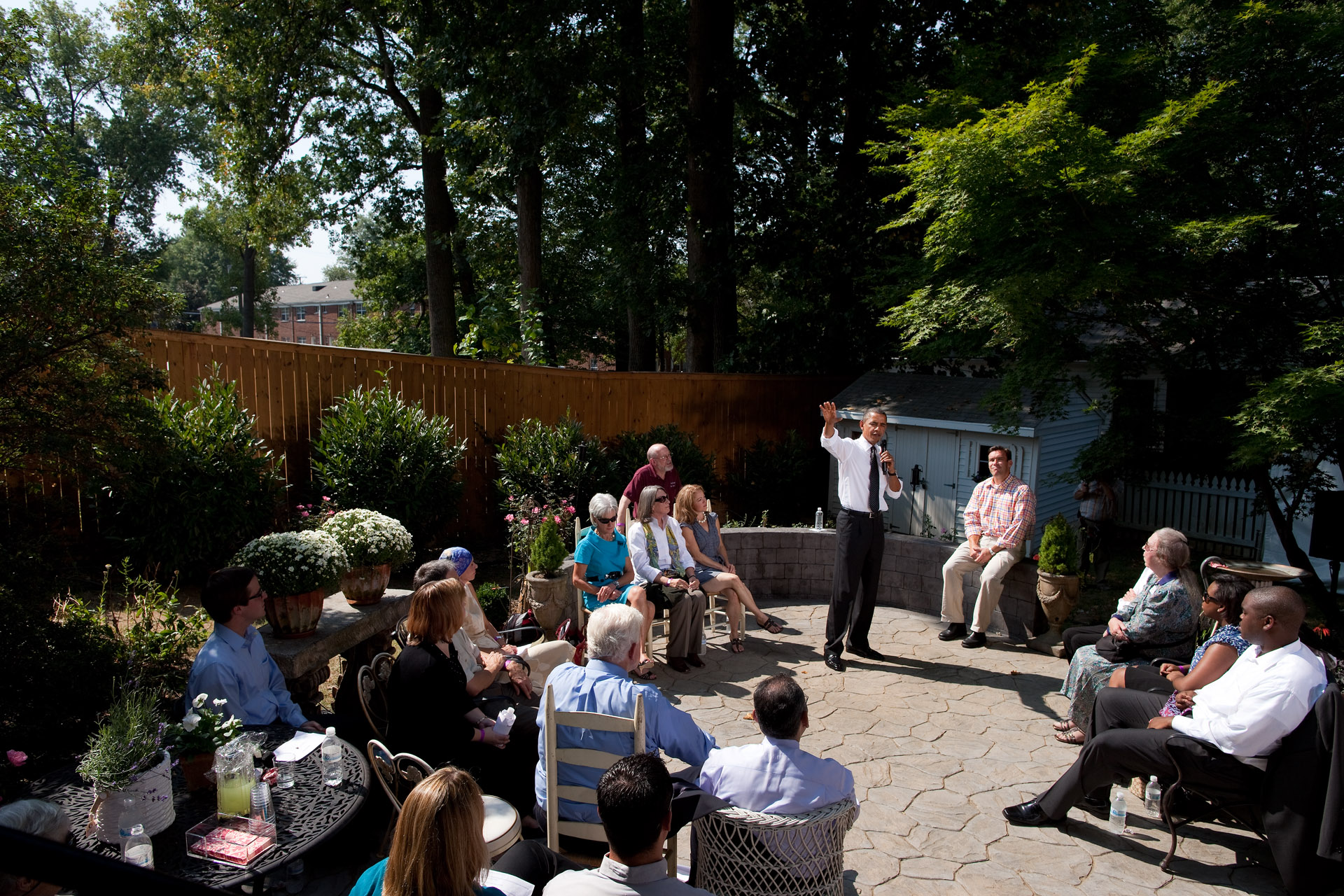 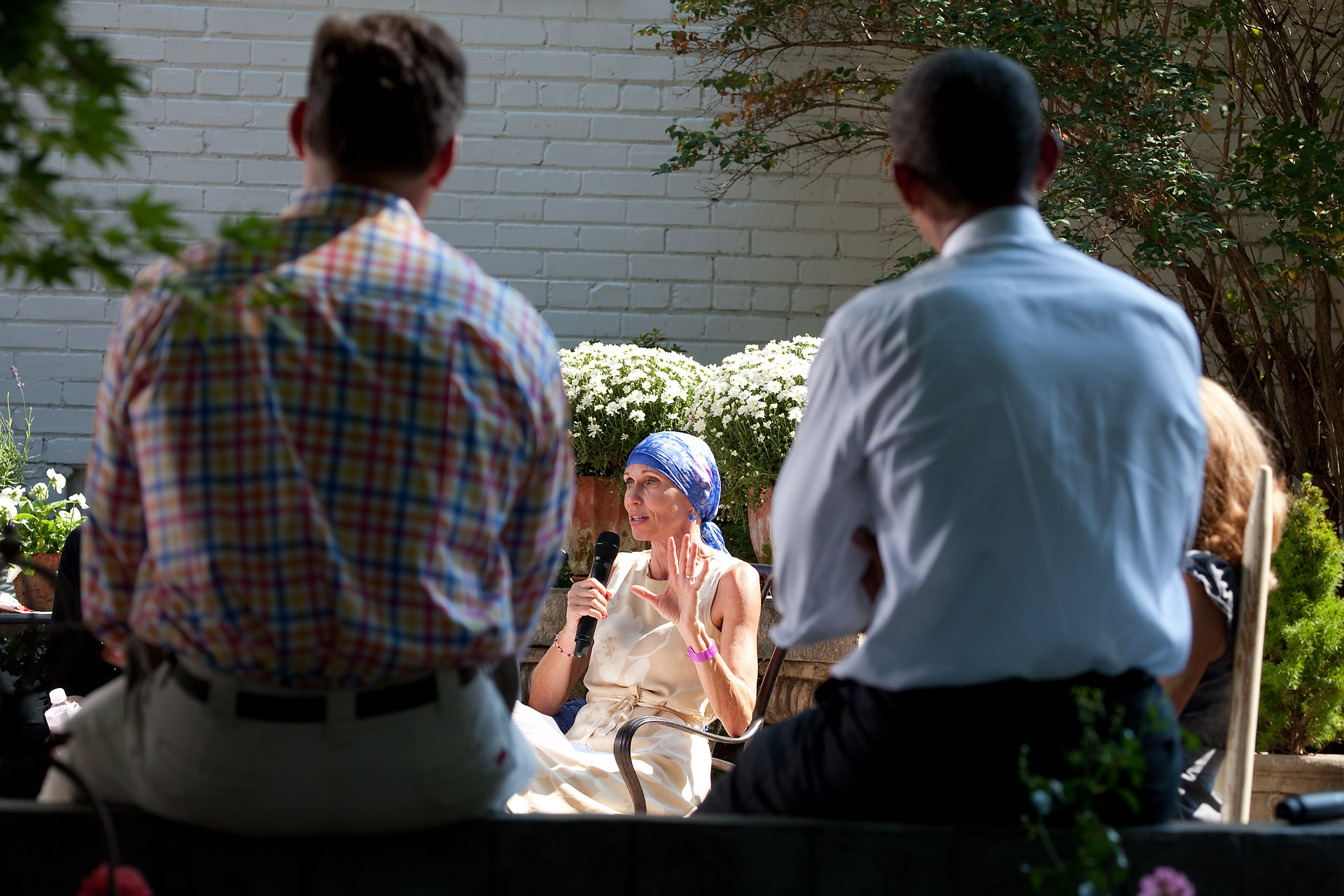 President Barack Obam, right, and Paul Brayshaw, left, listen to Gail O'Brien, from Keene, N.H., during a discussion on health care reform and the Patient’s Bill of Rights at the Brayshaw residence in Falls Church, Virginia. O'Brien was diagnosed earlier this year with high grade non-Hodgkin's lymphoma and had no health insurance September 22, 2010. (Official White House Photo)