Community and Interfaith Service Helping Turn Around Our Lowest-Performing Schools

September 22, 2010 at 11:20 AM ET by Mara Vanderslice
Twitter Facebook Email
Summary:
Mara Vanderslice, Deputy Director of The White House Office of Faith-based and Neighborhood Partnerships, discusses a recent meeting co-hosted with the Department of Education and the Corporation for National Community Service. The meeting focused on how community organizations can impact low-performing schools. 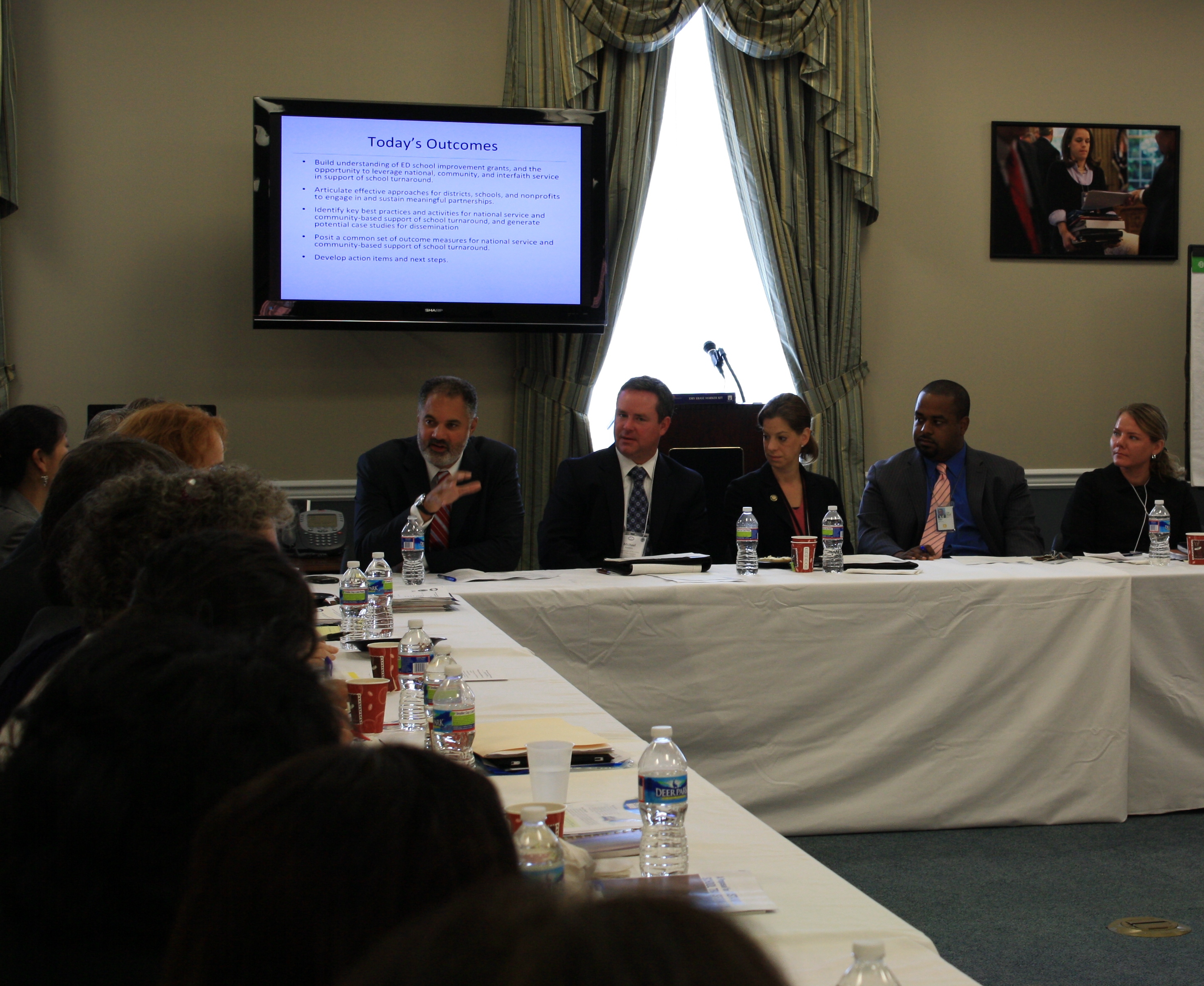 Patrick Corvington, CEO of the Corporation for National and Community Service, speaks at the September 20, 2010 meeting on the role of community organizations in turning around low-performing schools. September 20, 2010.

The U.S. Department of Education and the Corporation for National and Community Service are providing unprecedented support to states and communities to help turn around the nation’s chronically low-performing schools.  We frequently talk with faith, national, and community service leaders who are eager to assist these school turnaround efforts, but many of them don’t know where to start.

This is why the White House Office of Faith-based and Neighborhood Partnerships teamed up with the Department of Education and the Corporation for National and Community Service to host a landmark White House Convening on the Role of Community-Based Organizations in Turning Around Low-Performing Schools. On September 20 we brought together a select group of national education, nonprofit, and faith leaders from across the country who are committed to the idea that we all play critical roles in turning around our nation’s lowest-performing schools.  Joshua Dubois, Executive Director of the Office of Faith-Based and Neighborhood Partnerships and Patrick Corvington, CEO of the Corporation for National and Community Service, launched the conversation by acknowledging expertise of the audience and letting them know this is the start to a working relationship between the agencies in support of the Administration’s goals.

The conversation was robust and thoughtful. “There is so much to learn about how to successfully and consistently turn around chronically under-performing schools. What we already know, however, is that we can do more to bring the right resources to the right schools, and that schools and systems lack the capacity to do this work alone. Community-based organizations have a huge role to play in both building local capacity and creating public support for reform.” said Justin Cohen, President of the School Turnaround Group at Mass Insight.

Zeenat Rahman from Interfaith Youth Core talked about how interfaith service can not only benefit schools but strengthen communities. “Faith communities have immensely high levels of social capital, and are an important resource to tap,” said Rahman, “Interfaith partnerships bridge and multiply this social capital.”

Eric Schwarz from Citizen Schools, Lucy Friedman from TASC, Dan Cardinali from Communities In Schools, and Lester Strong from Experience Corps discussed the way that national and community service brings much needed talent and leadership to schools, while boosting academic achievement.  Several speakers outlined concrete steps to improve the coordination of supports in schools and to anchor those supports in research-based strategies.  Elevating the paradigm of national, community, and interfaith service is the platform to transform our schools into centers of excellence for all of our children.

We’ll soon be sharing the results of the convening with schools systems, community, and faith organizations across the country.  This meeting was just the beginning of this critical conversation, and we are excited to transfer this discussion into actions that will help transform low-performing schools.

Mara Vanderslice is the Deputy Director at The White House Office of Faith-based and Neighborhood Partnerships.