October 1, 2010 at 4:19 PM ET by Jesse Lee
Twitter Facebook Email
Summary:
The President thanks outgoing Chief of Staff Rahm Emanuel and ushers in the era of Pete Rouse.
[[nid:21576]]

The President's warm feelings toward Pete Rouse, who will be taking over Chief of Staff duties, are well known -- as is Rouse's disinclination towards the limelight.  So it was appropriate that he spent most of his time today discussing his outgoing Chief of Staff, Rahm Emanuel:

This is a bittersweet day here at the White House.  On the one hand, we are all very excited for Rahm as he takes on a new challenge for which he is extraordinarily well qualified.  But we’re also losing an incomparable leader of our staff and one who we are going to miss very much.

When I first started assembling this administration, I knew we were about to face some of the most difficult years this country has seen in generations.  The challenges were big and the margin for error was small -- two wars, an economy on the brinks of collapse, and a set of tough choices about issues that we had put off for decades; choices about health care and energy and education, how to rebuild a middle class that had been struggling for far too long.

And I knew that I needed somebody at my side who I could count on, day and night, to help get the job done.  In my mind, there was no candidate for the job of chief of staff who would meet the bill as well as Rahm Emanuel.  And that’s why I told him that he had no choice in the matter.  He was not allowed to say no.  It wasn’t just Rahm’s broad array of experiences in Congress and in the White House, in politics and in business.  It was also the fact that he just brings an unmatched level of energy and enthusiasm and commitment to every single thing that he does.

This was a great sacrifice for Rahm and Amy and the family to move out here.  Rahm gave up one of the most powerful positions on Capitol Hill to do this.  And in the last 20 months, Rahm has exceeded all of my expectations.  It’s fair to say that we could not have accomplished what we’ve accomplished without Rahm’s leadership -- from preventing a second depression to passing historic health care and financial reform legislation to restoring America’s leadership in the world.

So for nearly two years, I’ve begun my workday with Rahm.  I’ve ended my workday with Rahm.  Much to Amy’s chagrin, I’ve intruded on his life at almost any hour of the day, any day of the week, with just enormous challenges.  His advice has always been candid; his opinions have always been insightful; his commitment to his job has always been heartfelt, born of a passionate desire to move this country forward and lift up the lives of the middle class and people who are struggling to get there. 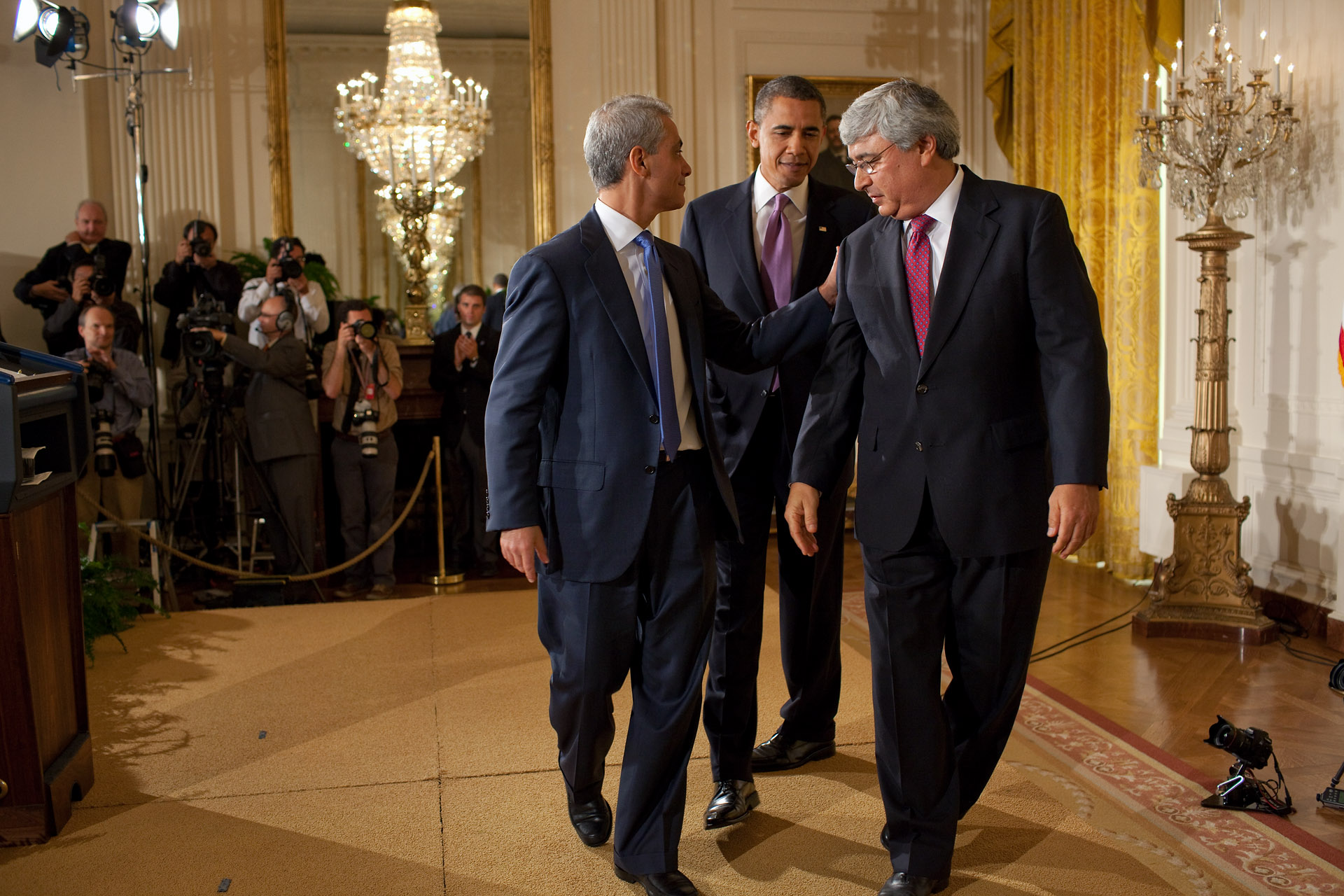 President Barack Obama leaves the East Room of the White House after announcing that Chief of Staff Rahm Emanuel, left, is leaving to return to Chicago and will be replaced on an interim basis by Senior Advisor Pete Rouse, right, October 1, 2010. (Official White House Photo by Pete Souza)

Rahm Emanuel closed his remarks aterwards touching on his own journey, the President's, and Pete Rouse's:

Both my parents raised me to give something back to the country and the community that has given us so much.  And I want to thank you for the opportunity to repay in a small portion of the blessings this country has given my family.  I give you my word that even as I leave the White House, I will never leave that spirit of service behind.  (Applause.)

Now, because my temperament is sometimes a bit different than yours, Mr. President -- (laughter) -- I want to thank my colleagues for your patience the last two years that you have shown.  I'm sure you’ve learned some words that you’ve never heard before -- (laughter) -- and in an assortment of combination of words.  (Laughter.)  What we learned together was what a group of tireless, talented, committed people can achieve together.  And as difficult as it is to leave, I do so with the great comfort of knowing that Pete Rouse will be there to lead the operation forward.

From the moment I arrived, and the moment he arrived, Pete has been a good friend with great judgment.  He commands the respect of everyone in this building and brings decades of experience to this assignment.

Finally, I want to thank my wife Amy and our three remarkable children -- Zach, Ilana and Leah -- without whose love and support none of this would have been possible.  I hope to end this soon so they can all get back to school today and finish their exams.  (Laughter.)

Mr. President, thank you.  And thank you all.  I look forward to seeing you in Chicago.  (Applause.) 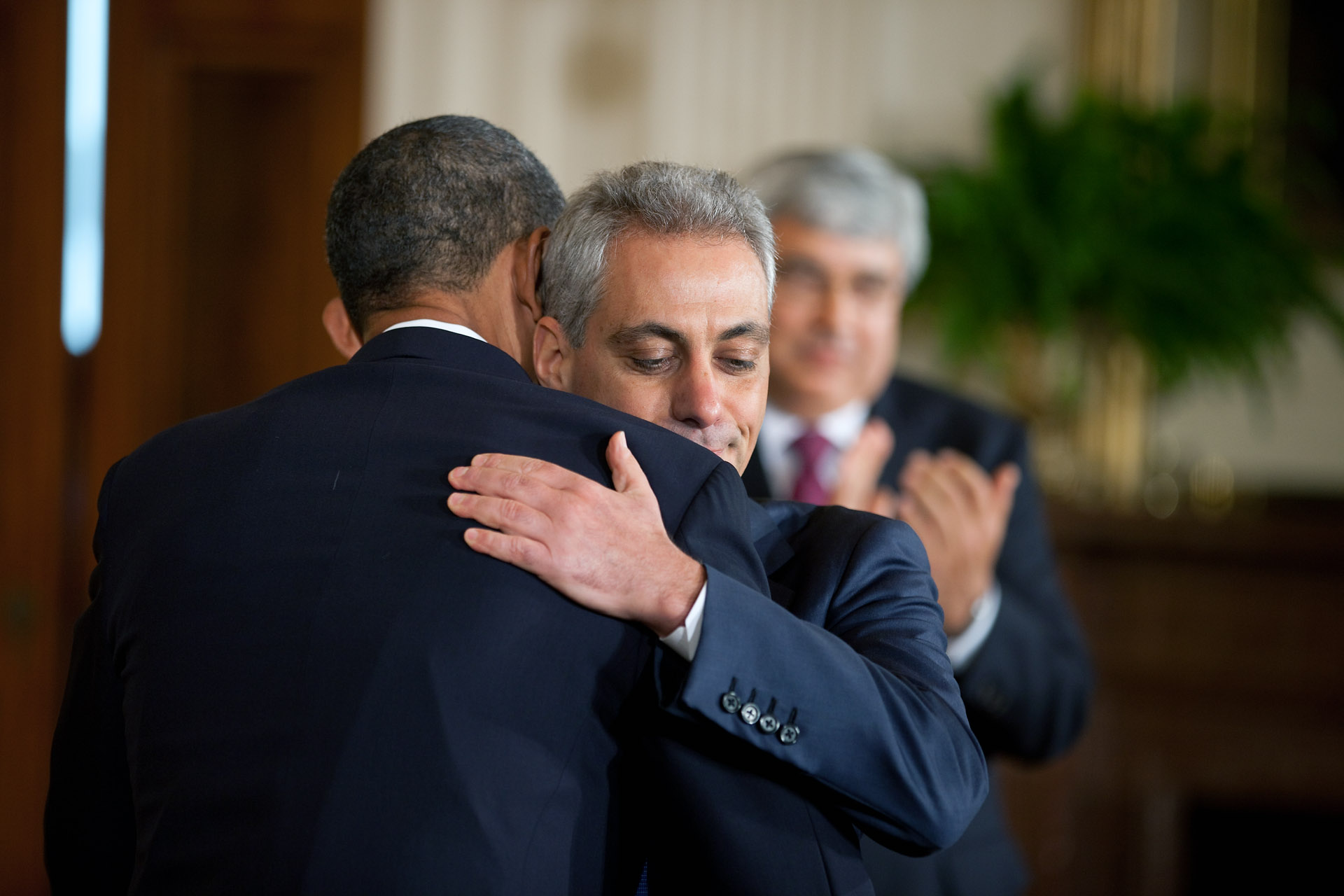