An Awe-Inspiring Chapter of America's History 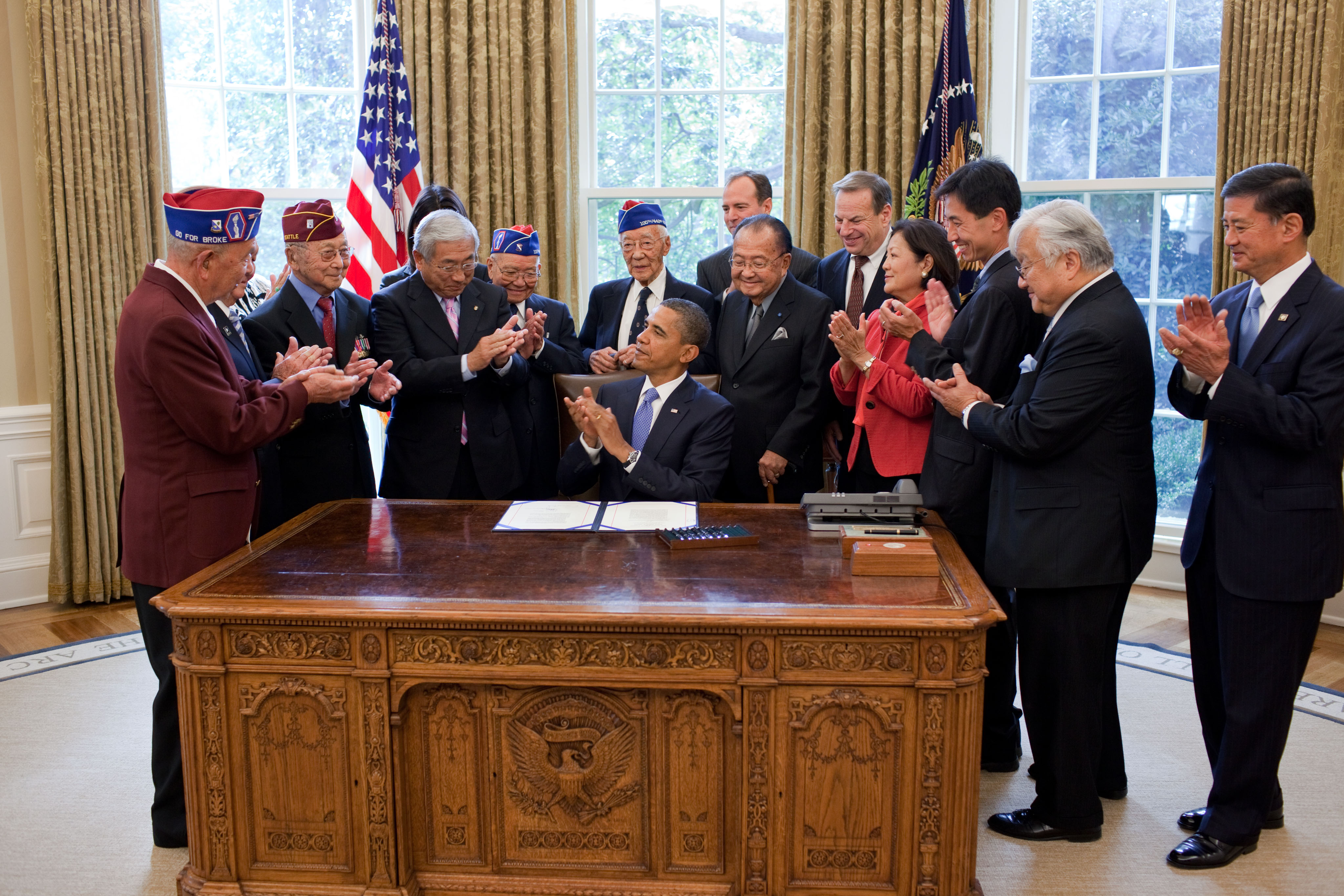 President Barack Obama and his guests applaud after signing S.1055, a bill to grant the Congressional Gold Medal, collectively, to the 100th Infantry Battalion and the 442nd Regimental Combat Team, in recognition of their dedicated service during World War II, in the Oval Office, October 5, 2010. (Official White House Photo by Pete Souza)

This afternoon the President signed legislation to grant the Congressional Gold Medal, collectively, to the 100th Infantry Battalion and 442nd Regimental Combat Team in recognition of their dedicated service during World War II.

The 100th Infantry Battalion, which was later incorporated into the 442nd Regimental Combat Team, was made up of predominantly Nisei (second generation Americans of Japanese ancestry) members of the Hawaii Provisional Infantry Battalion.  The 442nd became the most decorated unit in United States military history for its size and length of service.  Combined, the 100th Battalion and the 442nd Regimental Combat Team received 7 Presidential Unit Citations, 21 Medals of Honor, 29 Distinguished Service Crosses, 560 Silver Stars, 4,000 Bronze Stars, 22 Legion of Merit Medals, 15 Soldier’s Medal, and over 4,000 Purple Hearts.  From the government, the President was joined by Secretary Eric Shinseki of the Department of Veterans Affairs, Senator Daniel Inouye -- himself a member of the 442nd -- and several other Members of Congress. 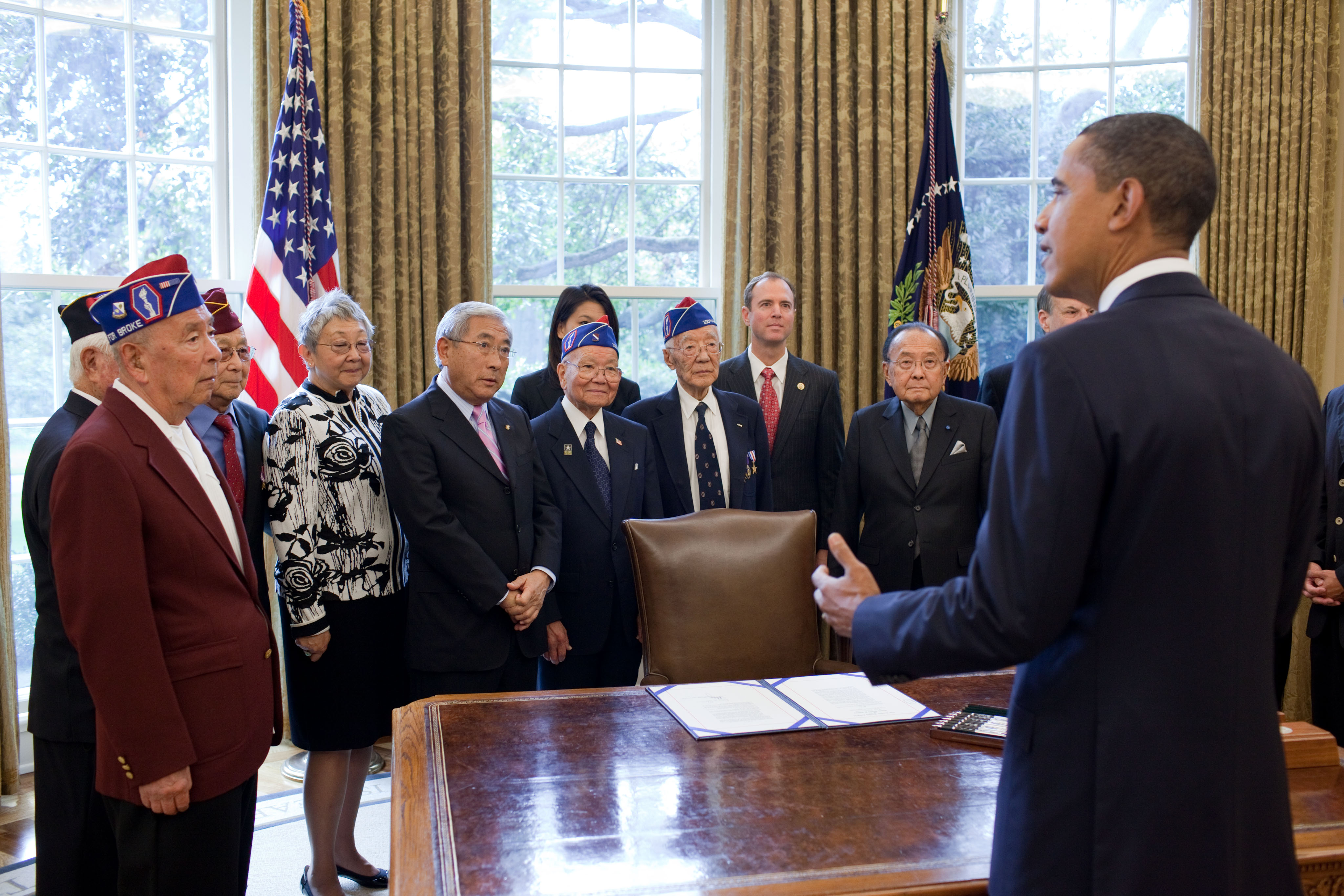 President Barack Obama talks with his guests before signing S.1055, a bill to grant the Congressional Gold Medal, collectively, to the 100th Infantry Battalion and the 442nd Regimental Combat Team, in recognition of their dedicated service during World War II, in the Oval Office, October 5, 2010. (Official White House Photo by Pete Souza)

The stories of the other veterans who attended the signing give a glimpse into this awe-inspiring chapter of America's history:

Mr. Fujikawa was born in Alameda, California on August 23, 1925.   On May 10, 1942, a few months after Pearl Harbor was bombed, Executive Order 9066 was enacted and Fujikawa and his family, along with 25,000 more Japanese Americans who lived on the US West Coast, were transported to one of the 10 internment camps scattered across the country. First, Fujikawa and his family were housed in a stable at Tanforan Race Track in San Bruno, CA and then relocated to Topaz, Utah where they were held behind barbed wire.  Fujikawa was drafted into the Army from Topaz and trained at Camp Shelby, MS.  Sent overseas with the 171st Infantry Battalion, Fujikawa was one of the replacements for the original 100th Infantry Battalion. When the war ended, he was among the returning Nisei or second-generation Japanese American soldiers of the 100th Infantry Battalion and 442nd Regimental Combat Team to parade down Constitution Avenue in Washington, D.C. for President Harry S. Truman's historic homecoming welcome. Fujikawa went to work for Hughes Aircraft and in 1952, moved back to California.  He was with Hughes 37 years.  Fujikawa remains an active member of the 100th/442nd Veterans Association and the Go For Broke National Education Center.  He lives in Los Angeles, CA.

Mr. Ichikawa was born and raised in Suisun Valley, California.  He graduated from the University of California in Berkeley in May 1941.  Following Japan's attack on Pearl Harbor, Grant and his family were incarcerated in a concentration camp.  In November 1942 he volunteered from the Camp to enroll in the 6-month US Army Military Intelligence Service (MIS) Language School.  Following graduation, he was sent to Brisbane, Australia and assigned to the Allied Translations and Interpretation Service (ATIS).  He participated in the Philippine liberation.  Immediately following Emperor Hirohito's announcement of Japan's surrender, Lt. Ichikawa talked 250 armed Japanese soldiers to surrender their weapons.  There were 3,000 Japanese Americans who served in the Asia Pacific War in every combat unit as front line interrogators/translators, in the rear echelon as translators, as communications interceptors and in the Special Forces to operate behind enemy lines.  Subsequent to his honorable discharge and return to civilian life, he was recalled to active duty during the Korean War to serve in the MIS.  Following his discharge for the second time, he was assigned to the US Consulate General in Surabaya and the US Embassy in Jakarta, Indonesia.  In April 1975 he served in Saigon and was among the last to leave aboard a helicopter from the Embassy rooftop.

Mr. Kanaya was born and raised in Clackamas, Oregon.  He volunteered for the Army in April 1941.  He volunteered to form the 442nd Regimental Combat Team as a cadre First Sergeant of the Medical Detachment and received a battlefield commission in Italy, September 1944 from General Mark Clark.  Kanaya was captured in France while assisting the 100th Battalion evacuating casualties in the Voges mountains and taken to a German Prisoner of War Camp, Olfag 64 in Shubin, Poland.  He hiked 400 miles from Poland to Hammelberg, Germany in the winter of 1945 to escape.   In July of 1946 Kanaya received a regular Army commission.  Mr. Kanaya also served in Japan and Korea in the Military Intelligence Service, the occupational forces in Japan and Germany and served as a military adviser in Vietnam. He retired from military after over 33 years of service. Mr. Kanaya currently lives in Gig Harbor, Washington.

Mr. Mori was born in Murray, Utah, just south of Salt Lake City.  His parents were immigrants to the United States from Kagoshima, Japan.  After graduation from Jordan High School, he joined the U.S. Army Reserves and spent six months on active duty at Fort Ord, California.  He served several years in the Reserves before being discharged.  Mori attended the University of Southern California and Santa Monica City College.  He attended Brigham Young University where he received a Bachelor’s degree and a Masters degree majoring in Economics, Asian Studies, and Political Science.  Mori was elected to the California State Assembly in March 1975 and served for six years in that capacity as one of the first two Japanese Americans to serve in the Assembly. Mori is currently the National Executive Director of the Japanese American Citizens League (JACL.) He is on the Executive Council of the Leadership Conference on Civil Rights (LCCR) and was chair of the National Coalition of Asian Pacific Americans (NCAPA) for two years.

Mr. Shima was born in Hawaii.  He was drafted into the US Army on October 12, 1944 and trained at Camp Blanding, Florida, as a replacement for the 442nd RCT.  He arrived in Italy on VE Day, 1945, and joined the 442nd at the Garda Airport in northern Italy and was assigned to its Public Relations Office.  When the 442nd returned as a unit to the USA in June 1946, Shima returned with the unit to handle public relations in New York City, Washington, DC, and Honolulu.  New York City gave the 442nd RCT an unprecedented huge welcome, the 442nd marched down Constitution Avenue and was reviewed by President Harry Truman at the Ellipse, and they received another huge welcome in Honolulu for the deactivation of colors.  Shima attended Georgetown University School of Foreign Service and Graduate School and served in the US Foreign Service.  He is Executive Director of the Japanese American Veterans Association (JAVA).

Ms. Yamazaki was born in San Leandro, California, and is the granddaughter of 442nd RCT veteran, Dave Kawagoye. She is the Chairperson for the National Veterans Network, which is a coalition of 22 Japanese American veteran and civic organizations nationwide established to serve the interests of Japanese American WWII and subsequent war veterans. She worked to support the passage of S.1055 to award the Congressional Gold Medal to the 100th Battalion, 442 and Military Intelligence Service. Moving forward, she and the National Veterans Network will work with U.S. Congress and U.S. Mint to plan the gold medal award presentation and celebratory events. Prior to this role, she served as the President and CEO of the Go For Broke National Education since 1997. Through her leadership, she introduced innovative education programs used in classrooms throughout California, Hawaii, as well as schools in Maryland and Virginia. She also founded the Hanashi Oral History Program which holds the nation’s largest collection of visual Japanese American World War II veteran oral histories. Approximately 700 of these oral histories are available in a digital library located on the organization’s website, many are used in the organization’s teacher-training program and all of the nearly 1,100 that have now been captured serve as valuable resources in countless other ways.  Christine earned her bachelor’s degree in business administration from the University of California at Riverside and currently resides in Torrance, CA.