It has been said that courage is not simply one of the virtues, but the form of every virtue at the testing point.  For Rob Miller, the testing point came nearly three years ago, deep in a snowy Afghan valley.  But the courage he displayed that day reflects every virtue that defined his life.

Rob was wise beyond his years.  Growing up in Wheaton, Illinois, outside of Chicago, he was the boy in school who penned a poem about American GI’s in World War II, men -- like the soldier Rob would become himself —- who he said fought day and night, fighting for what they thought was right.

Rob was born to lead -— the high school gymnast who trained so hard his coach had to kick him out at night so they could close the gym.  He was the Army recruit who pushed himself to his limits -— both physically and mentally -— to earn the title Green Beret.  He was the Special Forces soldier who, on his first tour in Afghanistan, earned two Army Commendation Medals for his valor.

Devotion to duty.  An abiding sense of honor.  A profound love of country.  These were the virtues that found their ultimate expression when Rob -— just 24 years old and on his second tour -— met his testing point on January 25, 2008.

Rob and his team were in the remote northwest of Afghanistan.  Their mission:  clear a valley of insurgents who had been attacking Afghan forces and terrorizing villagers.  So when they came across an insurgent compound, Rob and his men made their move, unleashing their fire and calling in airstrikes.

Now, they were on foot, heading over to that destroyed compound, to assess the damage and gather intelligence.  It was still dark, just before dawn.  It was freezing cold -- and silent, except for the crackle of their radios and the crunch of snow under their boots.  Like so many times before, Rob was up front -- leading a patrol of two dozen Afghans and Americans on a narrow trail along the valley floor, the steep mountains towering over them.

First, it was just a single insurgent, jumping out from behind a boulder.  Then, the whole valley seemed to explode with gunfire.  Within seconds, Rob and his patrol were pinned down, with almost no cover -- bullets and rocket-propelled grenades raining down from every direction.  And when enemy reinforcements poured in, the odds were overwhelming.  Rob’s small patrol of two dozen men was nearly surrounded by almost 150 insurgents.

With the enemy just feets away -- some so close he could see their faces -- Rob held his ground.  Despite the chaos around him, he radioed back enemy positions.  As the only Pashto speaker on his team, he organized the Afghan soldiers around him.  But the incoming fire, in the words of one soldier, was simply “astounding.”

Rob made a decision.  He called for his team to fall back.  And then he did something extraordinary.  Rob moved in the other direction -- toward the enemy, drawing their guns away from his team and bringing the fire of all those insurgents down upon himself.

The fighting was ferocious.  Rob seemed to disappear into clouds of dust and debris, but his team could hear him on the radio, still calling out the enemy’s position.  And they could hear his weapon still firing as he provided cover for his men.  And then, over the radio, they heard his voice.  He had been hit.  But still, he kept calling out enemy positions.  Still, he kept firing.  Still, he kept throwing his grenades.  And then they heard it -- Rob’s weapon fell silent.

The relentless fire forced them back, but they refused to leave their fallen comrade.  When reinforcements arrived, these Americans went in again -- risking their lives, taking more casualties -- determined to bring Rob Miller out of that valley.  And finally, after fighting that raged for hours, they did.

When the dust settled and the smoke cleared, there was no doubt Rob Miller and his team had struck a major blow against the local insurgency.  Five members of his patrol had been wounded, but his team had survived.  And one of his teammates surely spoke for all of them when he said of Rob, “I would not be alive today if not for his ultimate sacrifice.”

This is the valor that America honors today.  To Rob’s family and friends, I know that no words can ease the ache in your hearts.  But I also know this -- Rob’s life and legacy endures.

Rob endures in the pride of his parents.  Phil and Maureen, you raised a remarkable son.  Today and in the years to come, may you find some comfort in knowing that Rob gave his life doing what he loved -- protecting his friends and defending his country.  You gave your oldest son to America, and America is forever in your debt.

Rob endures in the love of his brothers and sisters, all seven of whom join us today.  Your brothers laid down his life so you could live yours in security and freedom.  You honor him by living your lives to the fullest, and I suspect Rob would be especially proud of his younger brother Tom, who, inspired by his big brother, is now training to be a Green Beret himself.

Rob endures in the Afghans that he trained and he befriended.  In valleys and villages half a world away, they remember him -- the American who spoke their language, who respected their culture and who helped them defend their country.  They welcomed him into their homes and invited him to their weddings.  And in a sign of their lasting gratitude, they presented Rob’s parents with a beautiful Afghan flag -- Afghan rug, which hangs today in the Miller home, a symbol of the partnership between the people of America and Afghanistan.

Rob Miller endures in the service of his teammates -- his brothers in arms who served with him, bled with him and fought to bring him home.  These soldiers embody the spirit that guides our troops in Afghanistan every day -- the courage, the resolve, the relentless focus on their mission:  to break the momentum of the Taliban insurgency, and to build the capacity of Afghans to defend themselves, and to make sure that Afghanistan is never again a safe haven for terrorists who would attack our country.  That is their mission, that is our mission, and that is what we will do.  And I would ask Rob’s team, who were with him that day, to please stand and be recognized.  (Applause.)

Finally, Rob Miller -- and all those who give their lives in our name -- endure in each of us.  Every American is safer because of their service.  And every American has a duty to remember and honor their sacrifice.

If we do -- if we keep their legacy alive, if we keep faith with the freedoms they died to defend -- then we can imagine a day, decades from now, when another child sits down at his desk, ponders the true meaning of heroism and finds inspiration in the story of a soldier -- Staff Sergeant Robert J. Miller and a generation that “fought day and night, fighting for what they thought was right.”

That is the meaning of this medal.  And that is our summons today, as a proud and grateful nation.  So please join me in welcoming Phil and Maureen Miller for the reading of the citation.  (Applause.) 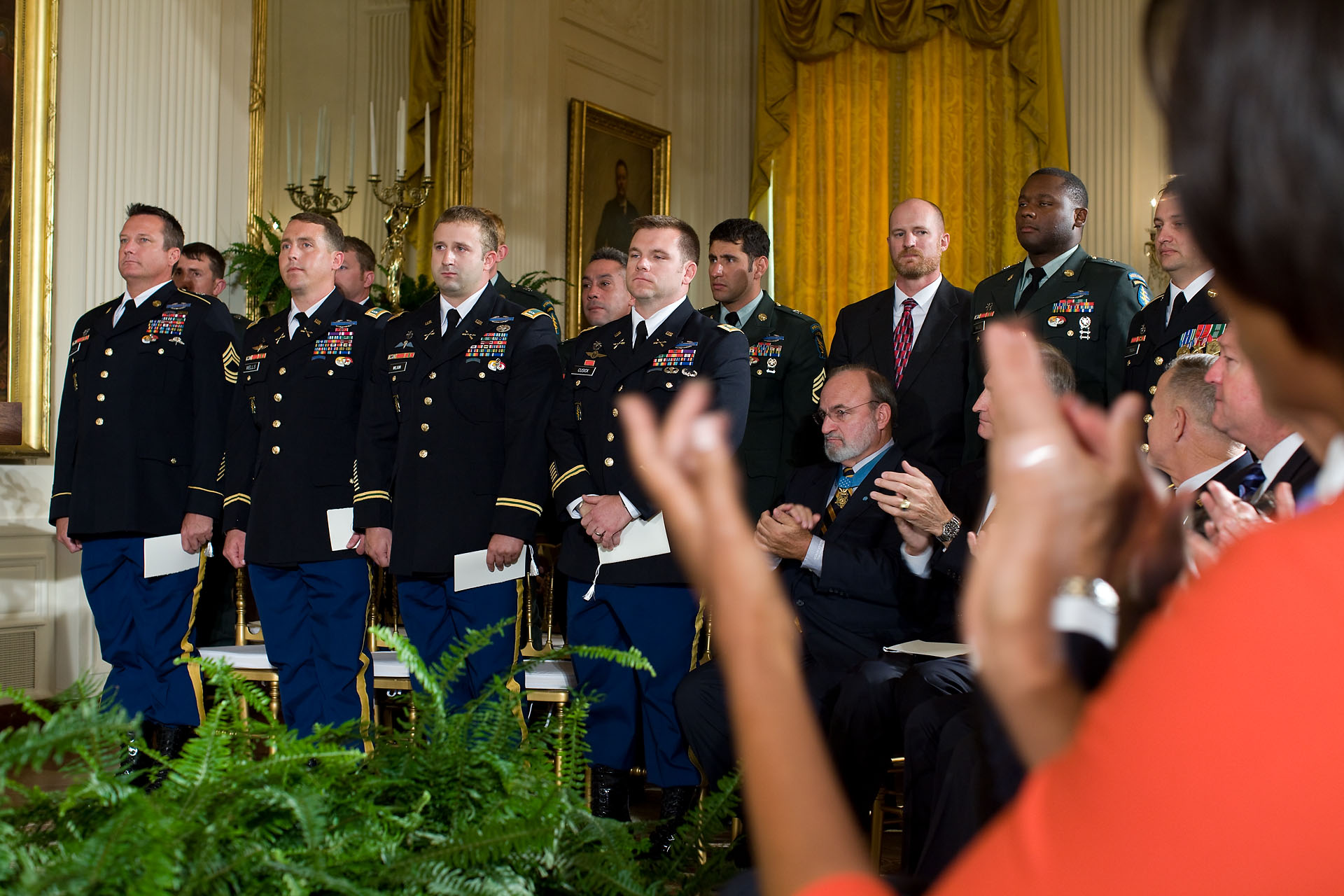 First Lady Michelle Obama, right, and the entire audience, applaud the members of Staff Sergeant Robert J. Miller's team who were with him in Afghanistan, during the presentation of the Medal of Honor posthumously to his parents during a ceremony in the East Room of the White House, October 6, 2010. (Official White House Photo by Pete Souza) 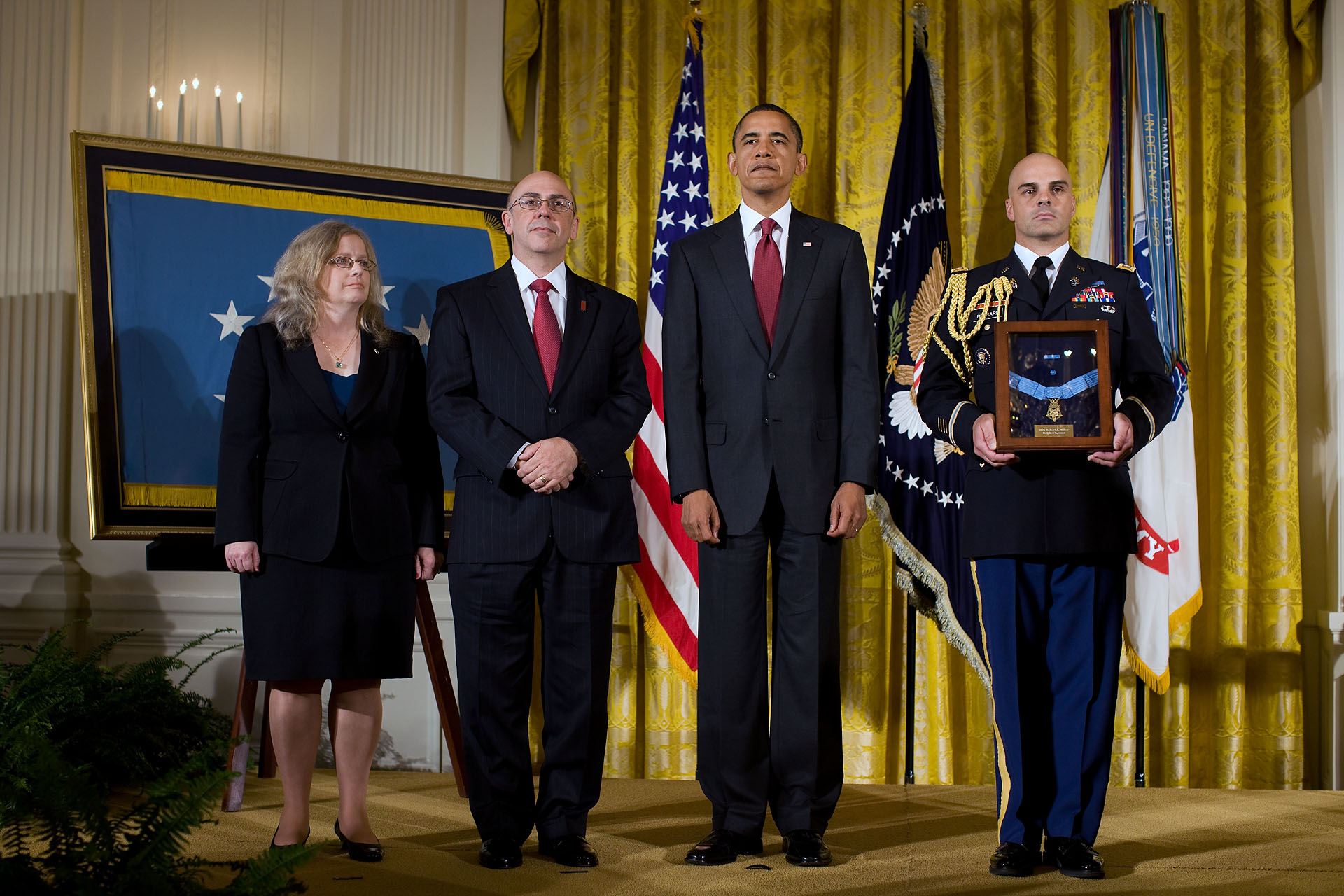 President Barack Obama stands with Phil and Maureen Miller, parents of Staff Sergeant Robert J. Miller, as the citation is read as the Medal of Honor is awarded posthumously to their son for his heroic actions in Afghanistan on January 25, 2008, during a ceremony in the East Room of the White House October 6, 2010. (Official White House Photo by Pete Souza)