October 8, 2010 at 9:33 AM ET by Austan Goolsbee
Twitter Facebook Email
Summary:
Austan Goolsbee, Chairman of the Council of Economic Advisers, writes about the latest jobs numbers.

Today’s employment report shows that private sector payrolls increased by 64,000 in September, continuing nine consecutive months of private sector job growth. This growth provides more evidence that the economy continues to recover, but we must do more to put the economy on a path of robust economic growth.  At the same time, the rate of job growth is not as large as needed to bring the unemployment rate down quickly, as the unemployment rate remained at 9.6%.

Despite the rise in private sector employment, overall payroll employment fell by 95,000 last month.  In addition to the anticipated layoffs of 77,000 temporary Census jobs, state and local government also experienced a drop in employment of 83,000.

Payroll employment growth varied across sectors with solid increases in leisure and hospitality, education and health services, and temporary help services. The sector with the largest decline was local government, where payrolls declined by 76,000.  Construction employment declined, but is essentially unchanged since March, and manufacturing employment fell slightly after seven consecutive increases.

In the household survey, employment rose by 141,000 and unemployment fell by 93,000.  About 400,000 fewer people were unemployed last month compared to a year ago.  However, the decline in unemployment last month was not large enough to impact the unemployment rate, which remained unchanged at 9.6% due to an increase in the labor force.  In addition, the number of workers who have been unemployed 27 weeks or longer declined, from 6.25 million to 6.12 million.

Given the volatility in the monthly employment and unemployment data, it is important not to read too much into any one monthly report.  Rather, we must remain focused on our efforts to encourage robust economic growth that will also bring strong employment growth.  The President continues to work with his economic team and looks forward to working with Congress when they return to identify measures to speed the recovery. 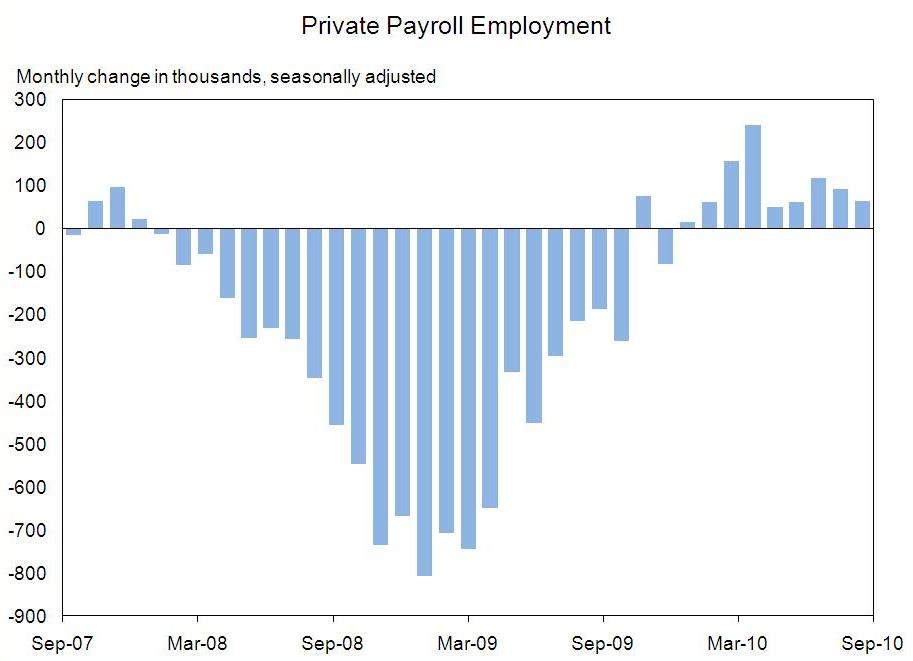 Austan Goolsbee is the Chairman of the Council of Economic Advisers