A recent article in the New York Times pointed out that a lot of people don’t know that the Recovery Act cut their taxes.

Well, I’m here to tell them that it did.  A lot.  Or, to be more precise, by $240 billion so far, going up to nearly $290 billion before we’re done (assuming Republicans fail in their efforts to raise your taxes by canceling the rest of the tax breaks, something they’ve pledged to do).

Those tax cuts have helped American families make ends meet.  They’ve helped them pay their kids’ college tuition, cover the cost of health care, and even offset the costs of energy-efficiency improvements to their homes.  And they’ve helped move the economy from free fall to growth.

As the Times article points out, there are good reasons why folks may not be familiar with these tax cuts.  For example, even though the Recovery Act provided states with billions of dollars to help avoid Medicaid cuts and keep teachers on the job, some states were forced to go the other way, raising taxes to help offset their budget shortfalls.

Take another example—the Making Work Pay Tax Credit.  It reached 95% of working families—over 100 million American taxpayers, more people than any other tax cut in the history of tax cuts.  Taxpayers received up to $800 through the credit, which came to them incrementally by reducing how much money was withheld from their paychecks for taxes both this year and last.

This incremental nature probably explains part of the lack of recognition—if you get a tax credit little by little instead of all in one big check, you’re less likely to notice that your income went up.  And of course, there’s been a lot of very tough stuff going on with people’s jobs and paychecks throughout this downturn.  But the data confirm that workers are spending the benefits they got during this period.

Look at the following graph, which first appeared in this analysis by Gary Burtless of the Brookings Institute (we’ve updated it).  As Gary put it:

The severity of the recession caused private incomes to plunge…[but] Federal government programs and stimulus dollars cushioned the massive blow to private family incomes.  Disposable income fell less than 1 percent after the start of the recession, a stunning fact too often ignored given the severity and length of the current downturn. 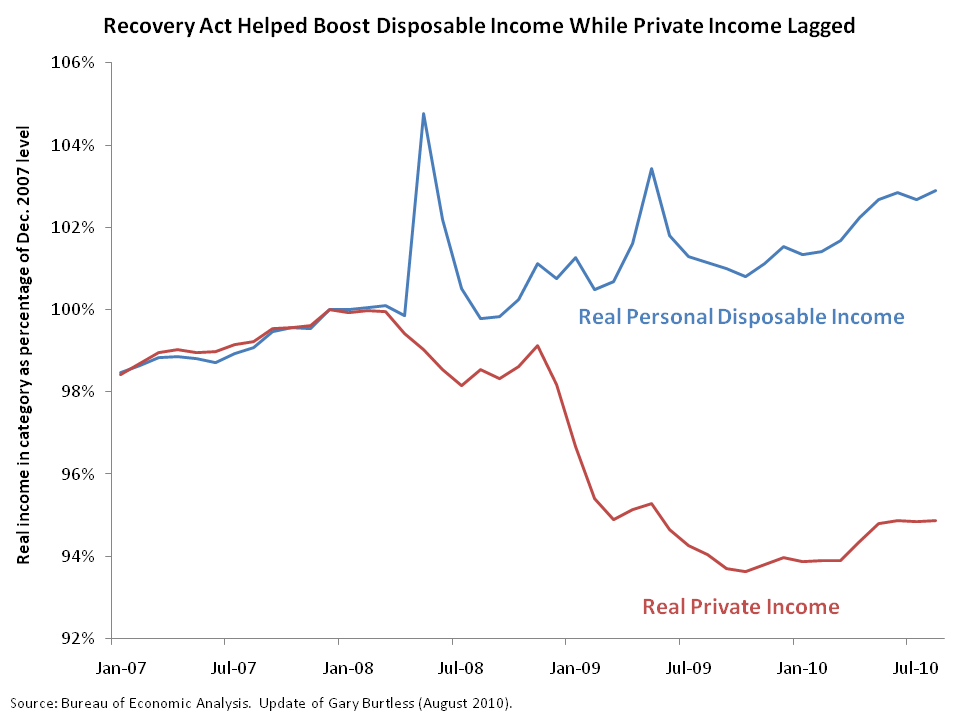 The bottom line shows how much income folks got from the private sector, from paychecks, profits, and capital income.  The top line shows their take-home, after-tax disposable income, including benefits like Social Security and Unemployment Insurance.  And as you can see, even as private income has fallen, disposable income has remained steady, thanks in large part to reduced tax payments and higher benefit payments to folks hit hard by the recession.

The gap between the two lines is historically very large, and it’s a great picture of the Recovery Act at work.  To be clear, we’re not claiming—not by a long shot—that these tax breaks offset anything approaching the full spate of economic pain families are experiencing as a result of the Great Recession.  But we are strongly asserting that they helped.

In fact, as you can see in the chart below, consumer spending is almost back to its pre-recession peak, suggesting that families have been using these tax cuts and benefits to make ends meet.

And as I noted, there’s a lot more than Making Work Pay at work here.  Other key Recovery Act tax credits include:

Moreover, the President continues to support significant new cuts, to middle-class families and to small businesses, to help preserve the gains we’ve made so far and build on the economy’s momentum.

Like I said, there’s a lot of moving parts when it comes to taxes, and families have enough to deal with these days without taking a quiz on how changes to the tax code have helped them.  But the facts, supported by clear evidence, are that President Obama has presided over hundreds of billions in tax cuts that continue to help families get through these tough times.