December 9, 2010 at 5:54 PM ET by Gayle Hoskison
Twitter Facebook Email
Summary:
Two USDA office's are working together to highlight how USDA's programs are being utilized by nonprofits, secular and faith-based, to assist low and very low income individuals become homeowners.

Becoming a homeowner for the first time is a big deal, especially for Brittany Meyer, who received the keys to her new home last month during a special ceremony.  Up until that one moment in time, she never believed she would share the American Dream of homeownership.

But on June 27, 2010, her dream became a reality thanks to Habitat for Humanity of Mason County, which has been helping people in Washington State become homeowners for many years.

Now for the first time, our office, in conjunction with USDA Rural Development is able to partner with this wonderful faith-based organization to increase their capacity so they can help even more people.

This partnership not only involves Habitat and Rural Development, but also brings in other resources such as the homeowner providing labor, community members volunteering, and local businesses and churches providing resources to help the homeowner be successful.

“This approach is a win-win for everyone,” Tammy said.  “This is an exciting partnership that blends federal, non-profit, faith-based, and community efforts.” 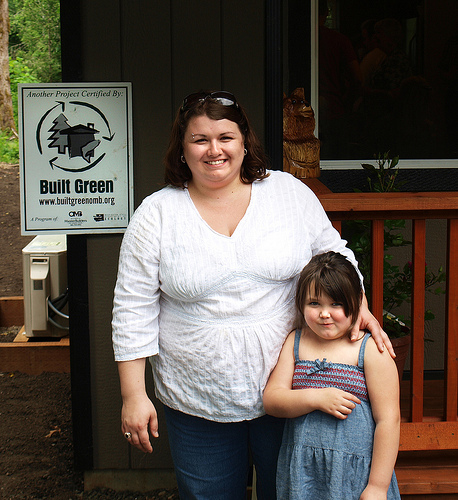 Brittany Meyer and daughter Lexi stand outside their new Mason County Home in Washington State. A unique part of this project is that the home is built "green" and received a 5 star rating for energy standards.