A Global Focus on Climate Change

December 14, 2010 at 2:01 PM ET by Nancy Sutley
Twitter Facebook Email
Summary:
White House Council on Environmental Quality Chair Nancy Sutley participates in the 16th session of the Conference of the Parties to the United Nations Framework Convention on Climate Change.

Climate change is one of the greatest environmental and public health challenges we face in the modern world.  Confronting it will demand global collaboration and prompt difficult decisions.  Last week, I joined Secretaries Chu and Vilsack at the 16th session of the Conference of the Parties (COP-16) to the United Nations Framework Convention on Climate Change. 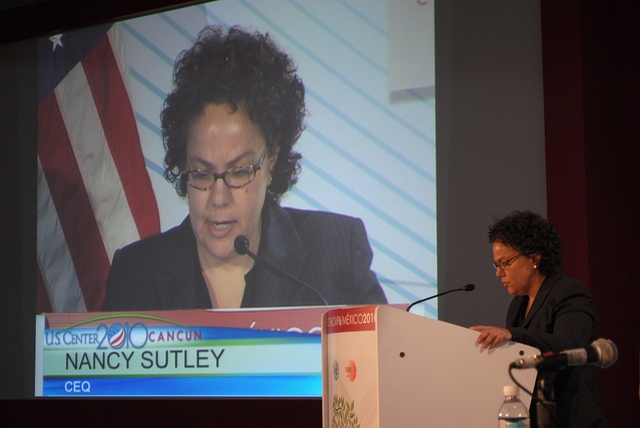 CEQ Chair Sutley addresses the U.S. Center at COP-16 in Cancun, Mexico, on December 8, 2010 (Courtesy of U.S. Department of State)

President Obama has made it clear that the United States must take bold action to address the growing threat of global warming, to reduce our dependence on finite resources such as oil, and to create clean energy jobs and technologies.  This Administration has taken unprecedented steps to address these problems –we have made major investments in clean energy through the Recovery Act and we have moved toward tough new fuel economy standards for cars and light trucks, among a range of other actions.

This Administration recognizes that the Federal Government cannot advocate change with any credibility unless we are willing to take action ourselves.  U.S. Special Envoy for Climate Change and head of the U.S. delegation Todd Stern focused on securing a balanced package of decisions building on the progress made in Copenhagen last year.  I hosted side events to highlight leadership in focusing on the Federal Government’s role in reducing greenhouse gas emissions and preparing the U.S. to adapt to the impacts of climate change.

The Federal Government is the single largest energy consumer in the U.S. economy, racking up an energy bill of more than $24 billion in 2008 alone.   President Obama signed an Executive Order last year directing Federal Agencies to slash their greenhouse gas emissions and meet sustainability goals to help us grow a clean energy economy and save taxpayer dollars.

The U.S. Government is one of the first national governments or large corporations to tackle this challenge to measure, report, and reduce our greenhouse gas pollution from indirect sources (such as employee commuting).  Our commitment to leading by example is about more than net reductions in greenhouse gases.  We are also building up a body of knowledge and experience among Federal officials who are involved in setting and implementing national policies aimed at achieving our clean energy goals.  And through pilot programs with some of our 600,000 vendors and contractors, we are working to design ways to support businesses that share these sustainability goals.

Sharing our leadership at home in Federal sustainability with an audience of international leaders is an important way to highlight our commitment to dealing with climate change.  President Obama’s Executive Order allows us to leverage the Federal Government’s influence to benefit all Americans, support a job-producing clean energy economy, protect our environment, and help prop up the health and prosperity of the United States and the world.

A special note of congratulations and thanks to Ambassador Stern and the U.S. Negotiations team for helping to forge agreements at Cancun that will make measureable progress in reducing global greenhouse gas pollution.