January 6, 2011 at 3:04 PM ET by Rosie Rios
Twitter Facebook Email
Summary:
Hear what Elizabeth Warren, Assistant to the President and Special Advisor to the Secretary of the Treasury on the Consumer Financial Protection Bureau, had to say at the Women in Finance Leadership Series at the Treasury Department.

We recently held our second event in the Women in Finance Leadership Series at the Treasury Department. The program featured Elizabeth Warren, Assistant to the President and Special Advisor to the Secretary of the Treasury on the Consumer Financial Protection Bureau (CFPB).‪ Speaking to a crowd in Treasury’s Cash Room, Professor Warren discussed her efforts to stand up the CFPB as a data-driven agency that can make consumer financial products more transparent and help level the playing field for American families.‪ By working to fix the broken consumer credit market, CFPB will address real problems faced by families across the country. 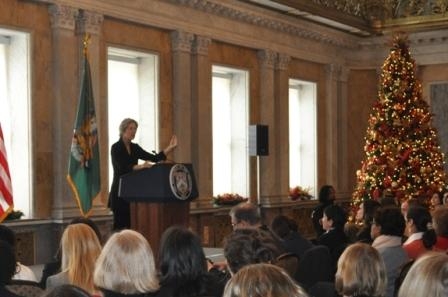 Elizabeth Warren, Assistant to the President and Special Advisor to the Secretary of the Treasury on the Consumer Financial Protection Bureau, speaking at the Women in Finance Leadership Series.

In her remarks, Professor Warren provided an overview of CFPB and what to expect in 2011 and beyond. In summary, CFPB is focusing on three initiatives for its near-term substantive agenda:

1. Shopping for a Mortgage: The typical mortgage application and closing process requires buyers to sign stacks of documents, most of which they will never read. The new Bureau has initiated an effort to re-think and streamline the federal consumer disclosures, both to find better ways to deliver critical information when it is most useful to consumers and to reduce unnecessary regulatory burdens on industry.

3. Engaging Families: The agency is designed to be a voice for consumers in Washington.  It must be built with the active engagement of American people, locking in the culture that the agency belongs to them and that it serves their needs.  Outreach is a large part of the mission, and efforts will include continuing to communicate the agency’s mission and progress and to interact directly with the American people.

The Women in Finance Series is a follow-up to the Women in Finance Symposium that Treasury hosted last spring, which brought together senior officials from across the government's economic agencies, private sector leaders, and women entering the field for a series of panel discussions to recognize the contributions of women and to discuss the best means to foster success among future generations of women in the finance sector.

Rosie Rios serves as Treasurer of the United States.