January 12, 2011 at 12:12 PM ET by Patrick Gaspard
Twitter Facebook Email
Summary:
Patrick Gaspard, Director of the White House Office of Political Affairs and the highest ranking Haitian-American official in the Obama Administration, looks back on the last year in Haiti and on toward the future.

Today marks the one year anniversary of the catastrophic earthquake that struck Haiti.  Nearly a quarter of a million lives were lost, more than three hundred thousand people were injured and more than a million people were left homeless. The President called it a “cruel and incomprehensible” blow to a nation that has known its share of hardship and suffering. None of us will soon forget the images of despair in the days after the earthquake, or the moments of hope as Americans joined together with people from around the world in a massive humanitarian effort.

This is an important time for us to reflect on the important progress that’s been made, and the many players who have made it possible, while reaffirming the American commitment to Haiti and looking ahead to the work that remains to be done in cooperation with the Haitian people and international partners.

Today, we remember the Americans who were on the ground within 24 hours of the earthquake, starting the work of immediate lifesaving and rescues that would continue for weeks— a U.S. Coast Guard team, a disaster assistance response team and portions of two U.S. urban search and rescue teams.

We remember the millions of Americans—one in every two American households—  who showed their tremendous generosity and compassion by sending contributions to Haiti.

We remember the non-governmental organizations who swept in to provide immediate relief, and continue there today, helping to rebuild the country.

And we recognize, especially, the Haitian people, who, through the unprecedented devastation of the earthquake itself, decades of widespread poverty, Hurricane Tomas, and cholera, have demonstrated dignity, strength and resilience.

I also want to stop to remember the toughness and resourcefulness of our Haitian-American community. In this, as the proud son of Haitians, I may be biased. But I can personally recall the anguish of those early days, watching the images of my parents’ devastated country and waiting for any word from friends and family in the country, and so I am doubly impressed by the energy and quickness with which the Haitian-American community responded to the crisis.

In the days after the earthquake, I joined Vice President Biden in Miami for a meeting with Haitian-American leaders, and we witnessed how they had channeled the uncertainty and sadness of that moment into organizing their local communities in support of Haiti. On that trip, I visited warehouses full of bottled water and essential supplies, met community leaders who had been canvassing for donations to Haiti and saw coalitions being built to support long-term reconstruction. The Vice President returned to visit with that group in April, and found them still finding ways to send aid, provide comfort and plan for the long haul.

Last week, I joined him as he spoke with a broad group of key Haitian American leaders from across the country here at the White House for a briefing that also featured senior U.S. government officials from USAID, the State Department and the Department of Homeland Security. Those Diaspora leaders shared the work they have done and brought their concerns, their suggestions and their hopes. The Vice President, in turn, honored the labor of the Haitian-American community and stressed the President’s unwavering commitment to stand by the Haitian people, in concert with international partners, as they continue to rebuild not only the physical structures that were destroyed in the earthquake but also the spirit of the nation. The Vice President recalled the Haitian proverb that many hands lighten the load and committed that this Administration would continue to embrace that wisdom in solidarity with Haitian Americans. 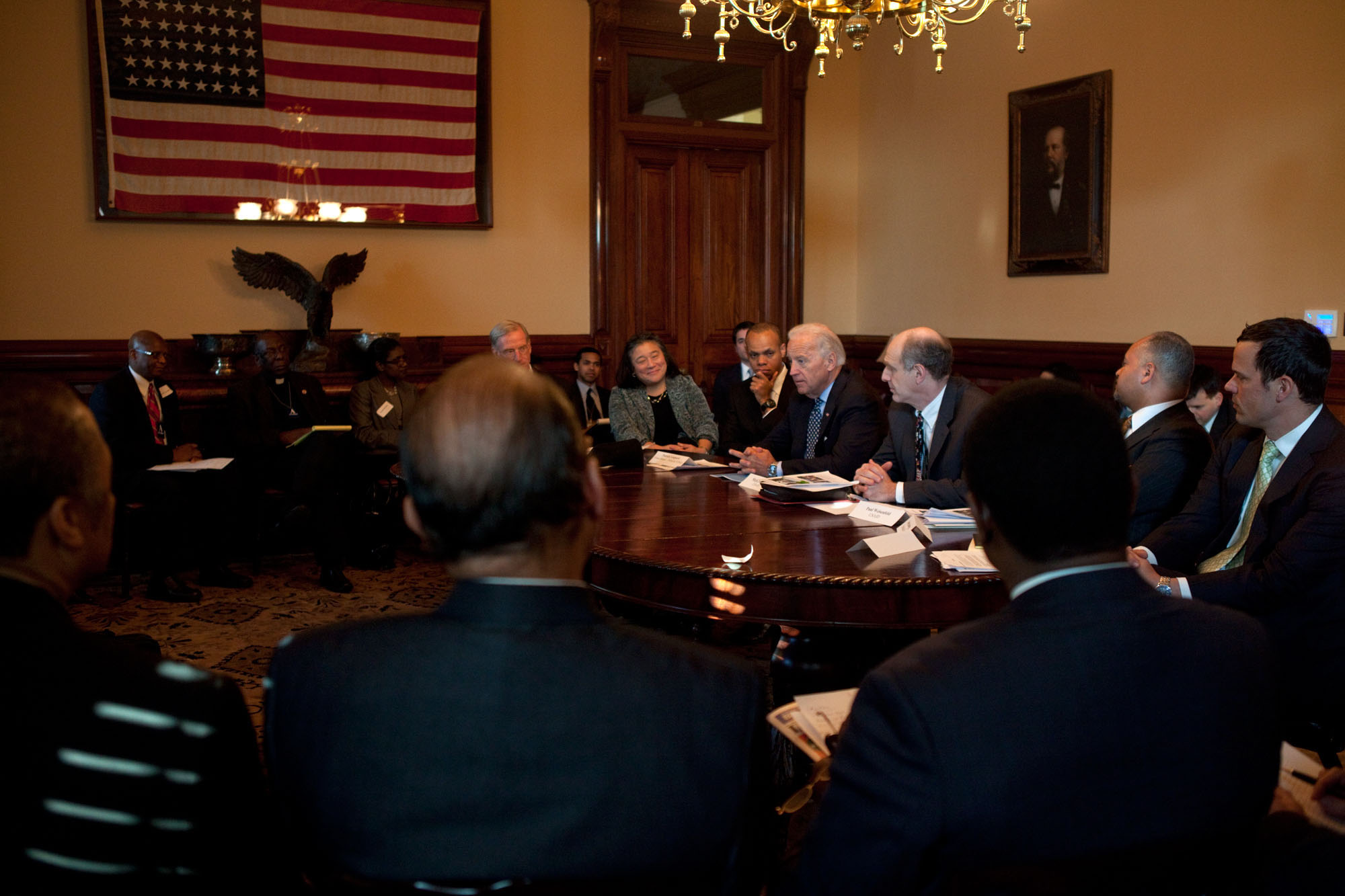 In advance of the one year anniversary of the earthquake in Haiti, Vice President Joe Biden, Director of Political Affairs Patrick Gaspard, Director of Public Engagement Tina Tchen and other senior U.S. government officials meet with Haitian-American leaders to discuss the United States’ lasting commitment to Haiti, in the Secretary of War Suite in the Eisenhower Executive Office Building, January 6, 2011. (Official White House Photo by David Lienemann)

A year ago, the President ordered an immediate response to the catastrophe that was swift, coordinated and aggressive. Since then, the United States has taken a whole-of-government approach to facilitate and enhance the work of our partners in Haiti and across the international community. Innovative approaches have allowed Haitians to have access to more clean water than before the quake, and created a better medical system and a more robust food supply to assist the Haitian people on a path to self-sufficiency.  In the last year, the United States has provided a billion dollars in assistance, and we will do more – you can get more information on the United States’ commitment over the last year from the State Department (pdf), or read the President’s statement yesterday reaffirming that commitment.

In the words of Ambassador Kenneth Merten, U.S. ambassador to Haiti:

We face a long and difficult journey, and now we pause to mourn the dead. But we renew our commitment to the living by helping build a more prosperous and stable Haiti, and a future that its people want.

A great deal of work remains ahead, work that will take years to complete.  Going forward, the United States will continue to be focused on a comprehensive strategy drafted in partnership with the Government of Haiti and our international partners to achieve economic growth and stability. This strategy will focus investment on the four areas of infrastructure and energy, food and economic security, health and services and governance and rule of law.

Long-term success depends on Haiti rising to the challenges before it. The United States remains committed to supporting the efforts of the Haitian people as they forge their future and we urge our international partners to do the same.

Patrick Gaspard is the Director of the White House Office of Political Affairs and is the highest ranking Haitian-American official in the Obama Administration.