Science Students Stand Tall at State of the Union

January 25, 2011 at 1:08 PM ET by Rick Weiss and Phil Larson
Twitter Facebook Email
Summary:
Four remarkable science students from across the country will join Michelle Obama and other guests during the President’s State of the Union Address.

President Obama made his commitment to science and technology very clear in the first minutes of his presidency, when he promised in his Inaugural Address that his Administration would “restore science to its rightful place.”

Tonight that rightful place will be the First Lady’s Box in the U.S. Capitol, where four remarkable science students from across the country will join Michelle Obama and other guests during the President’s State of the Union Address.

The extraordinary placement of so many young achievers in science and technology in this prominent location during tonight’s historic Address reflects a core theme for the President, and one expected to be echoed in his remarks tonight—that science and technology, which have been responsible for so much of this Nation’s economic growth in the last century, will be key to America’s global leadership and security in the new century as well.

For a preview of who is likely to be part of that 21st century leadership team, check out these amazing students who will be listening to the President tonight from the best seats in the house:

Amy Chyao, High School Junior (Richardson, TX)
Amy won first place at the Intel International Science and Engineering Fair for her work in developing a new cancer drug and met the President at the White House Science Fair. A self-starter, she taught herself chemistry over the summer prior to beginning her research, which is now being looked at by pharmaceutical researchers from Texas and other states.

Brandon Ford, High School Junior (Philadelphia, PA)
Brandon is a leader of the West Philadelphia High School Hybrid X team that competed in the global Progressive Automotive X Prize competition with their Ford Focus that got an official 65.1 MPGe.  Brandon spends several days a week working on projects with the Hybrid X team, which was mentioned in the President’s September “Change the Equation” speech.

Diego Vasquez, Community College student (Phoenix, AZ)
Diego was a member of the Cesar Chavez high school team that won a grant through the Lemelson-MIT Program’s InventTeams initative for its design of a motorized chair for medically fragile individuals. The team decided to design the chair after watching a disabled friend struggle at school. They had a tamale “bake sale” in order to raise money to travel to MIT for the showcase event. Diego met the President at the White House Science Fair.

Mikayla Nelson, High School Freshman (Billings, MT)
Mikayla helped lead her middle school team to a first place finish at the National Science Bowl for its design document for a solar car, as well as a 5th place finish at the Department of Energy’s Junior Solar Sprint. She is currently taking flying lessons in hopes of attaining her pilot’s license, building a 1932 Pietenpol Sky Scout airplane, and restoring a 1967 VW Beetle. She also works at a local hobby store to help cover the cost of her school tuition and hopes to one day attend the U.S. Air Force Academy and major in mechanical engineering.

One other thing these students also represent: the power of challenges and prizes to motivate individuals to excel. This Administration recognizes that, very often, the best ideas may come from unexpected sources.  Through official White House guidance, the launch of Challenge.gov, and strong support for government-wide prize authority, the Obama Administration has made this powerful approach to innovation a priority within the Federal Government.

So when you look up at the balcony during the President’s remarks tonight, look for four young faces who studied hard, pushed against the frontiers of science and technology, reached for first place and achieved it.  Tonight, science couldn’t have asked for a better place. 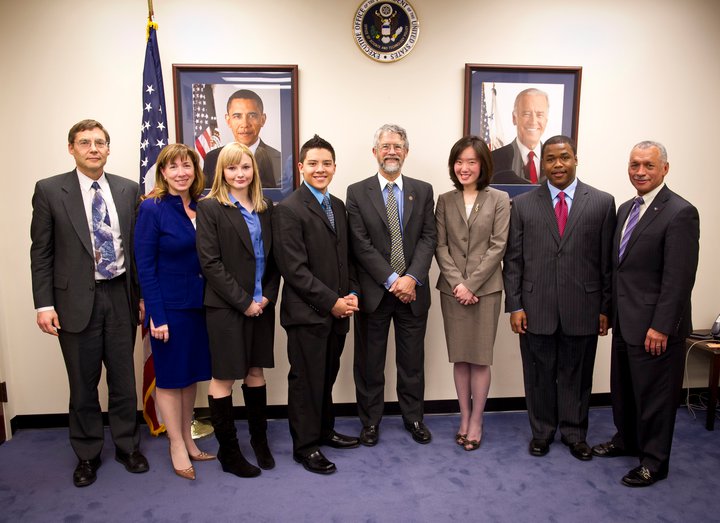