Advance Estimate of GDP for the Fourth Quarter of 2010

January 28, 2011 at 11:06 AM ET by Austan Goolsbee
Twitter Facebook Email
Summary:
Chairman of the Council of Economic Advisers Austan Goolsbee discusses a new report that shows the growth rate of the economy continued to increase in the final quarter of 2010, a further sign that the economy continues to gain momentum as it recovers from the worst recession since the Great Depression.

Today’s report shows that the growth rate of the economy continued to increase in the final quarter of 2010, a further sign that the economy continues to gain momentum as it recovers from the worst recession since the Great Depression. Real GDP, the total amount of goods and services produced in the country, grew at a 3.2 percent annual rate in the fourth quarter of last year, the sixth straight quarter of positive growth.  For 2010 as a whole, GDP rose 2.9 percent, the fastest since 2005 and a dramatic reversal compared with the -2.6 percent rate in 2009. Private forecasters have predicted that the tax cut package signed by the President in December will have a significant impact on economic growth this year. We are on the right path, but have a lot more work to do to accelerate growth so that we are creating the jobs we need.

Some key components of GDP continued to expand in the fourth quarter, including exports (8.5 percent), consumer spending (4.4 percent), equipment and software investment (5.8 percent), and residential spending (3.4 percent). Government spending fell 0.6 percent. Consumption and net exports made the largest positive contributions to growth this quarter, while the decline in inventory investment subtracted substantially from GDP growth.

The overall trend of economic data over the past several months has been encouraging. The measures we worked with Congress to pass last month that continue tax cuts for the middle class and extend unemployment insurance are important for strengthening the recovery in 2011 and putting more money in the pockets of American families. The incentives for business investment will further boost the economy. The Administration will continue to focus on actions that the President has recommended to increase growth and job creation, such as providing incentives to encourage businesses to invest and hire here at home, investing in education and infrastructure, and promoting exports abroad. 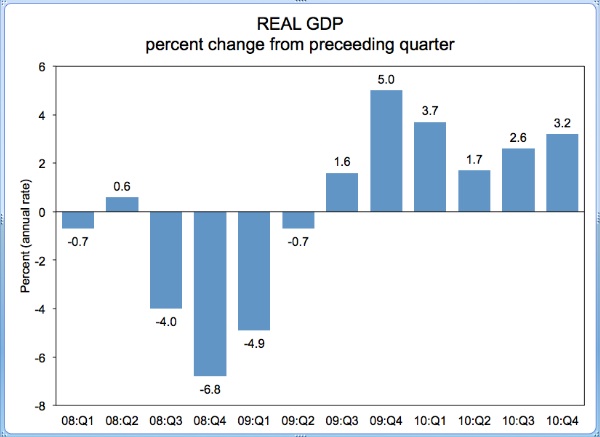