Ed. note: This is the first blog post in a series that highlights African Americans from throughout the Administration who contribute to the President’s vision of winning the future through their work.

I’m lucky to have been raised by my parents, Raymond and Sue Ann Smith, who value educat 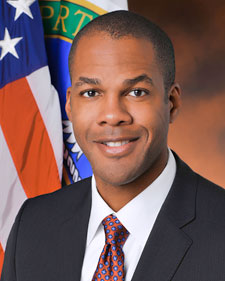 ion.  As we celebrate Black History Month I reflect on the fact that I grew up in a period that offered me many more opportunities than my parents had when they were my age. This is one of the things that motivated me to return to public service, and inspires me to work every day to create opportunities for all Americans.

I grew up in Fort Worth Texas and earned a BS degree in Engineering Management from the United States Military Academy at West Point. I began my career as an officer in the U. S. Army and served tours with the 2nd Infantry Division in Korea and the 25th Infantry Division in Hawaii. After leaving military service, I went on to work for Citibank and JPMorgan in New York City and London. While I was in England I earned an MBA from Cambridge University.

I spent the next eleven years in the oil industry, first with Texaco, then with Chevron. I spent most of that time leading international projects, including three years living in Bogotá Colombia negotiating offshore and pipeline agreements. The Secretary of Energy appointed me Deputy Assistant Secretary for Oil and Natural Gas in September of 2009.

Here at the Department of Energy I am responsible for leading the Department’s domestic and international natural gas and oil programs. This includes research and development, policy analysis, LNG safety, and natural gas import and licensing. Specifically, I am focused on leading research which will quantify the risks and opportunities associated with exploration and production activities, onshore and offshore.  Our country needs to prudently develop our domestic natural gas resources, but we have to do it safely and with respect for the environment.  Developing these resources leads to innovative new jobs in communities across the United States. I also lead research efforts on methane hydrate, an alternative source of natural gas which has the potential to significantly decrease our nation’s dependence on oil. This supports President Obama’s vision for our nation’s transition to a clean energy economy and his call for 80 percent of America’s electricity to come from clean sources by 2035, including wind, solar, nuclear, clean coal and natural gas.

As the President has emphasized, the nation that leads the clean-energy economy will be the nation that leads the global economy.  This is an exciting time for public service, and the Department of Energy is leading a lot of innovative initiatives that are key elements to winning the future. I’d encourage young people interested in the Department of Energy to ask themselves where their interest lies. This is a diverse place: from natural gas to solar, and from science and engineering to environmental law, important work is getting done here. Coming to work every day is exciting when you’re working on something you’re passionate about.

Since coming to Washington I have also had the opportunity to serve the community through volunteer efforts, to include chairing the board of the Emily J. T. Perez Foundation, which provides mentoring to girls at Oxon Hill High School in Prince George’s County, Maryland.  Emily was my cousin, and graduated from West Point near the top of her class in 2005. Her class was dubbed the “Class of 9-11” because they were plebes when the twin towers fell in 2001.  Emily served with distinction as a platoon leader with the 4th Infantry Division, and was the first member of her class to be killed in action in Iraq.

I’m inspired by her memory every day, and the sacrifices made by all of our uniformed forces who serve in harm’s way.  One of my current job responsibilities that I’m particularly passionate about is facilitating a more effective interagency coordination between the Department of Energy and the Department of Defense - to help forwardly deployed units use energy more efficiently, and consequently to reduce the number of fuel convoys that the military has to conduct to remote outposts.

Serving is a privilege. Our nation faces a lot of complex challenges, but I feel like I’m in a position to make a difference.

Learn more about Christopher, the Department of Energy, and the future of clean energy at Energy.gov