February 8, 2011 at 1:34 PM ET by Joshua DuBois
Twitter Facebook Email
Summary:
President Obama speaks to faith leaders from around the country and representatives around the world at the National Prayer Breakfast in Washington, D.C. 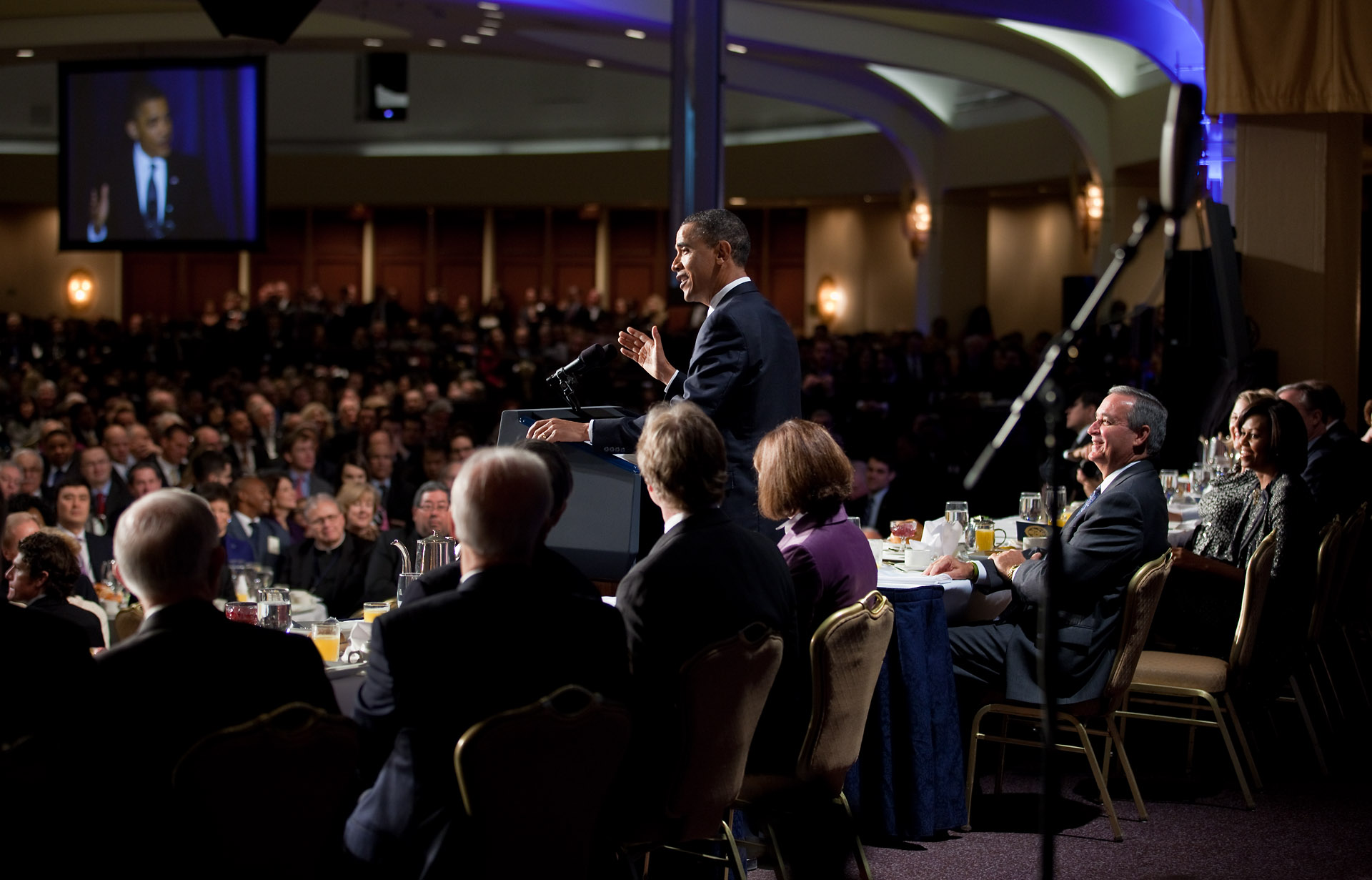 President Obama delivered personal and powerful remarks last week at the National Prayer Breakfast that highlighted his personal faith, and the importance of translating values into action. After two years in Office, the President admitted that the Presidency has a “funny way of making a person feel the need to pray.” That faith has sustained the President these past two years, and it has deeply impacted the way he lives his life and the way he thinks about his job as President.

The President went on to describe three common themes of his prayers as President. First, he said that he prays for God to strengthen his ability to help those who are struggling. The President confided in the audience on this point:

Sometimes I can't help right away.  Sometimes what I can do to try to improve the economy or to curb foreclosures or to help deal with the health care system -- sometimes it seems so distant and so remote, so profoundly inadequate to the enormity of the need.  And it is my faith, then, that biblical injunction to serve the least of these, that keeps me going and that keeps me from being overwhelmed.  It’s faith that reminds me that despite being just one very imperfect man, I can still help whoever I can, however I can, wherever I can, for as long as I can, and that somehow God will buttress these efforts.

The President went on to praise the work of faith-based organizations and non-profits in serving those in need at home and around the world. He described the work of his Office of Faith-based and Neighborhood Partnerships in helping to equip those organizations to better serve those in need, and doing so “in ways that are aligned with our constitutional principles.” He also acknowledged that the private sector can only do so much to confront some challenges alone:

The President continued to describe that he prays for humility as he seeks to lead the nation in these important times. He emphasized the importance of a humility that allows one to acknowledge that no one “has all the answers -- none of us, no matter what our political party or our station in life.”

Finally, the last theme he discussed, “one that binds all prayers together,” was that he “might walk closer with God and make that walk my first and most important task.” He closed his speech summarizing his approach to prayer:

We at the Faith-based and Neighborhood Partnerships Office are proud of the work individuals, organizations and communities are doing to help those in need. As the President’s speech last week attests, The White House supports the work of non-profits, and the role of the private sector in this country. We will be reflecting on the themes of the President’s speech throughout the year, and working to make sure we are advancing the President’s goal of supporting non-profits to serve those in need. Tell us your story of how you or someone you know is living out the call to serve.  We will share these stories in a future message.  Send your comments and stories to whpartnership@who.eop.gov.

Read the President’s full remarks and view videos and photos from the event.