Editor's Note: This post is part of the Celebrating Black History Month series, which highlights the contributions of African Americans whose work moves us closer to achieving the President's goal of winning the future.

I am honored to serve as Regional Administrator for the U.S. General Services Administration Northeast and Caribbean Region.  I firmly believe that I stand on the shoulders of my ancestors, who laid the 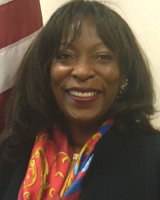 foundation for me to succeed.  From an early age, my late parents encouraged me to understand and build from the past.  My father served in the Armed Forces during World War II as a Tuskegee Airman in the Army Air Corps. After the war, he became an electrical engineer and eventually forged a career as a professor of electrical technology and the first African-American Assistant Dean at Suffolk Community College.  My mother began her career as a milliner and was one of the first African-American graduates from New York’s Fashion Institute of Technology, eventually becoming an elementary school teacher.

Growing up, my father took me to meetings of the Association for the Study of African-American Life and History in the home of Rosetta “Mother” Gaston.  In fact, the founder of the Association and “Father of Black History”, Dr. Carter G. Woodson, was one of my father’s mentors. At the meetings, my father, Congressman Edolphus Towns, former Congressman Major Owens, and other civic leaders engaged in lively conversations about building the necessary tools to build for the future by learning from the challenges and successes of the past.

As a proud lifelong resident of New York, I received my bachelor’s degree and a Charles H. Revson Fellowship on the Future of New York from Columbia University and a National Urban Fellowship at Bernard Baruch Graduate School of Public Administration.  I began my career as a community organizer and eventually went on to serve the City of New York as the Assistant Comptroller of Commercial Banking in the Office of the New York Comptroller.  I also served in State government as a former Deputy Superintendent of Banks in charge of the Consumer Services Division.  In these roles, I developed innovative public-private initiatives that created opportunities for residents, their communities, and businesses. I am particularly proud of the project that directed New York City to deposit funds in city banks that would then open branches in communities where there was little or no banking option.

As a Regional Administrator at the U.S. General Services Administration, I aim to contribute to President Obama’s vision to win the future by building a more innovative, sustainable, and energy efficient government. In addition to managing 541 federal buildings in our region, we are currently hard at work on projects expanding border stations, constructing federal courthouses, and returning federal tenants to the World Trade Center site.

In addition to my duties as Regional Administrator, I make sure to give back by serving on the Board of Directors of the Epilepsy Foundation of America, and I am the founding chairperson of their African-American Initiative. I am a member of the Board of Directors of the Desmond Tutu Institute for Prayer and Pilgrimage and am grounded by my faith as a member of the Greater Allen AME Cathedral of Jamaica, NY.

I am also one of 54 million people in America living with a disability, and one of three million with epilepsy.  I suffered a traumatic brain injury as a result of an automobile accident in 1995. I lost my cognitive and communication abilities and underwent more than five years of extensive therapy to regain them before returning to work.  I want my blessings of recovery and employment to inspire others living with a disability, and am proud that President Obama is committed to the employment of people with disabilities throughout the federal government.

Denise L. Pease is the Regional Administrator for the Northeast and Caribbean Region of the General Services Administration.