March 1, 2011 at 1:25 PM ET by Secretary Ray LaHood
Twitter Facebook Email
Summary:
Transportation Secretary Ray LaHood talks about his visit to Proterra in Greenville, South Carolina, and how businesses like Proterra are creating jobs today while building the foundation for the economy of tomorrow.

Cross-posted from the Department of Transportation blog.

Today, I want to share a terrific new video, called "Transporting America: Proterra," which tells the story of Proterra, Inc, an electric bus manufacturer in Greenville, South Carolina. Thanks to federal investment, this company has been able to develop incredible zero-emissions transit buses and add hundreds of new jobs in South Carolina.

Last month Deputy Secretary John Porcari penned a blog for us on "Good, Green Jobs."  He wrote that, "We know Americans can adopt environmentally friendly practices and create good jobs in the process."

Nowhere is that demonstrated more clearly than in Greenville, South Carolina, where Proterra, Inc, has begun manufacturing electric transit buses. More important to the Greenville community is the fact that Proterra has hired more than 120 workers, with plans to reach up to 350 workers by the end of this year and more than 1,300 by 2015.

Although Federal Tranist Administration grants had helped the company develop its fuel-cell technology, Proterra did not make the leap from a research and development company into a full-fledged manufacturer until FTA grants made it possible for cash-strapped transit agencies across the country to order new buses.

In January, I visited the Proterra plant and met with some of the newly hired workers.  Are they excited about their future and the stability the good jobs at Proterra offer?  You bet they are.  But when you listen to them, you begin to see they're also excited about building good, clean transportation for communities across America.

For example, when you watch our new video you'll meet Julie Shepherd, who, after being hired and trained by Proterra, finally bought her first home.  I hope you'll feel the same relief she and her daughter Autumn feel.  More importantly, I hope you'll feel the tremendous pride she has for the good work they do at Proterra and for the role Proterra workers see themselves playing in creating a better, brighter American future.

The Obama Administration is investing in tomorrow and creating jobs today.  And the video we're presenting today demonstrates that, with a little support from DOT, Proterra is hiring South Carolinians and helping America win the future. 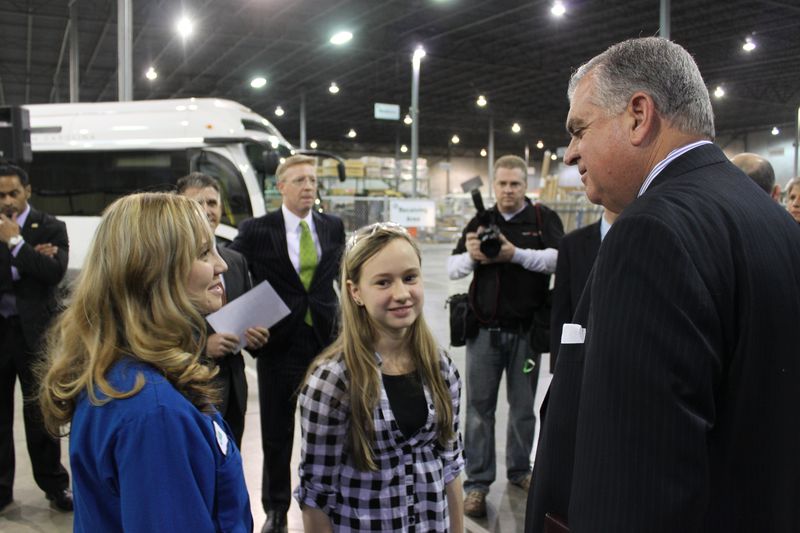 Transportation Secretary Ray LaHood meets with children of workers at the Proterra plant in Greenville, South Carolina, January 27, 2011. (by Department of Transportation)