March 6, 2011 at 11:47 AM ET by Damon Wells
Twitter Facebook Email
Summary:
Watch the video of President Obama's call to the crews of the Space Shuttle Discovery and International Space Station to congratulate them on their achievements and courage as they work and live in orbit around the Earth.
[[nid:26971]]

On Thursday President Obama called the crews of the Space Shuttle Discovery and International Space Station (ISS) to congratulate them on their achievements and courage as they work and live in orbit around the Earth.  This Space Shuttle mission, which is the last for the venerable Discovery orbiter before it is retired, includes tasks such as delivering the first human-like robot to space and transporting the last major structural element for the U.S. segment of the ISS.  Picking up on these themes, the President asked about the work planned for the robot, known as Robonaut-2, or “R2.” After learning that R2 had not yet been unpacked after the long journey to space, he urged the crews to “let him stretch his legs pretty soon.” The product of a joint development effort between NASA and General Motors, R2 will stay aboard the ISS to demonstrate how dexterous robots of this nature can potentially work side by side with human crews in making repairs or conducting scientific tasks in space.

President Obama also commented on the unusual level of traffic at the ISS right now.  For the first time, a spacecraft from every international partner that flies to the ISS is docked simultaneously at this orbiting facility, including vehicles from the United States, Russia, Europe, and Japan.  The composition of the ISS crew reflects this level of partnership, as astronauts and cosmonauts from the United States, Russia, and Europe are currently living and working in the laboratory.

The President noted that this unprecedented partnership in space is something that each of our nations can be proud of, and he pointed to the Station as a metaphor for how the peoples of the world can learn to live and work together productively, not just in space but on the Earth too.  The crew members enthusiastically agreed,  remarking that the ISS may be one of the most complex and challenging construction efforts ever undertaken by humankind, with pieces constructed in different nations around the world and then launched above the Earth – and yet “everything fit,” they said, when it was assembled in orbit. 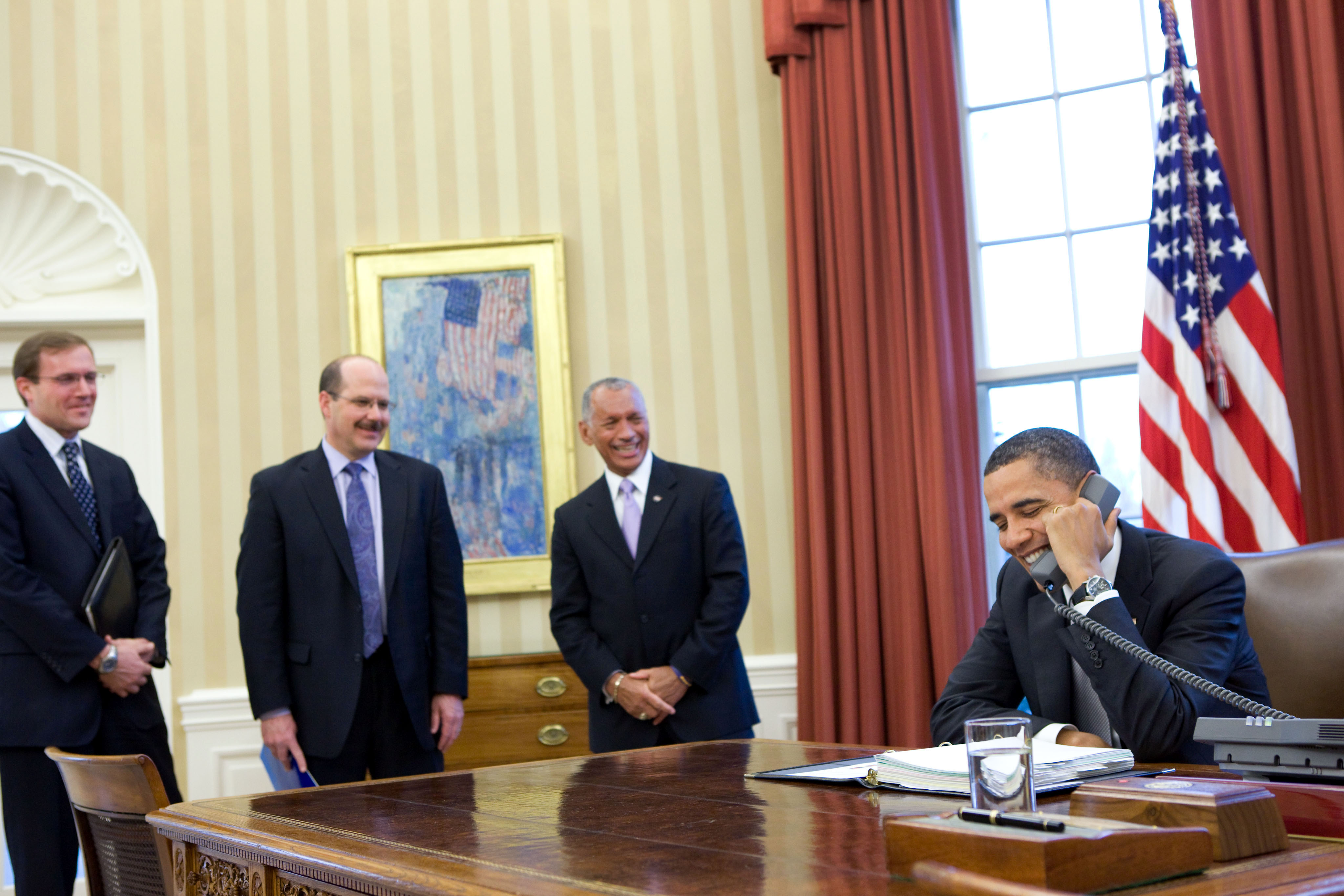 President Barack Obama makes a phone call with the crew of the Space Shuttle Discovery and the International Space Station from the Oval Office, March 3, 2011. Listening in the background are, from left: Ted Wackler, Acting Chief of Staff, Office of Science and Technology Policy; Damon Wells, Assistant Director for Aeronautics and Space, Office of Science and Technology Policy; and NASA Administrator Charles Bolden. March 3, 2011. (Official White House Photo by Samantha Appleton)

The ISS is indeed a remarkable facility, measuring over 350 feet in length (about the length of a football field, including the end zones) and set to have a mass of over 408,000 kilograms (or a weight of more than 900,000 pounds on Earth) when fully assembled.  Flying a few hundred miles over the Earth, the ISS is traveling at some 17,500 miles per hour and makes a complete orbit about every 90 minutes.  In terms of creature comforts, the complex now has more livable space inside than a conventional five-bedroom house and contains two bathrooms and a gymnasium.  Despite those capacious dimensions, there is no room to spare.  The ISS has been occupied continuously by human crews for over a decade (it is now carrying six crew members), and the activity level is high, with astronauts and cosmonauts working full time to assemble and maintain the facility while also conducting research in the microgravity environment of space with the goal of reaping benefits in areas such as medicine, materials science, and exploration technology development and demonstration.  In part to allow more time for such ground-breaking activities, the Obama Administration recently extended the ISS initiative and plans to continue operations until at least 2020.

Yet beyond those complex goals, perhaps it is the “simplest” of things happening at the ISS that are the most remarkable: that every day, astronauts and cosmonauts are traveling above us in space, going about their duties, learning more about how to live, operate, and work in the unyielding yet beautiful space environment, residing in relative comfort inside a spectacular demonstration of technological ingenuity. As the President said on his call: “You are setting such a great example with your dedication, courage, and commitment to exploration. These are traits that built America.”