March 8, 2011 at 5:22 PM ET by Heather Zichal
Twitter Facebook Email
Summary:
The Administration is expanding safe and responsible energy production by making efforts to increase current oil production and lower dependency on foreign oil. By increasing oil production in the US, the government is protecting consumers from high gas prices.

Across the country, American families and businesses are feeling the impact of higher gasoline prices. We understand the extra burden that increasing energy prices put on family budgets across the country, and the administration is closely monitoring the situation and weighing various options that we have.

One area where we have focused our efforts since the start of the administration – long before this current spike – is increasing responsible domestic energy production – including oil and gas. In fact, oil production last year rose to its highest level since 2003. From 2008 to 2010, oil production from the Outer Continental Shelf increased more than a third – from 446 million barrels in 2008 to an more than 600 million barrels of estimated production in 2010. 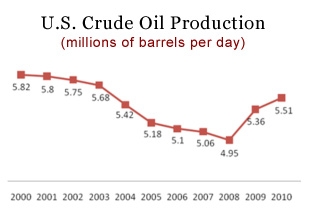 Of course, the BP Deepwater Horizon oil spill served as a reminder that we must develop our domestic energy resources both safely and responsibly. That is why the Administration developed important new safety standards that increase oversight and build on the lessons learned from the worst oil spill in U.S. history. Since these important new standards were put into place last summer, we have approved more than 35 shallow water permits, and just last week we approved the first deepwater permit to meet new standards – including the ability to demonstrate the ability to contain a sub-sea oil spill.  We have also approved more than 20 deepwater permits for activity that was not subject to the deepwater drilling suspensions, but represent increased jobs and production.

Beyond domestic oil and gas development, this Administration has also taken unprecedented action to reduce our long-term dependence on oil by investing in a clean energy economy. The historic fuel standards agreement for cars and trucks will save Americans money at the pump and reduce oil consumption by 1.8 billion barrels. And the Clean Energy Standard announced by the President in the State of the Union set an ambitious goal of increasing our clean energy share to 80% by 2035, and using a broad array of energy sources to get there. We are not picking winners and losers – our focus is on providing industry and utilities with the flexibility to make their own decisions regarding the best way to increase their clean energy share.

The Administration will continue to monitor oil prices and work to protect consumers, increase responsible production of domestic energy resources, reduce dependence on foreign oil, and ultimately build a clean energy economy in the United States.