President Obama Talks Education in Boston: “A Moral and Economic Imperative to Give Every Child the Chance to Succeed”

March 8, 2011 at 5:38 PM ET by Jesse Lee
Twitter Facebook Email
Summary:
The President is joined by Melinda Gates in touring TechBoston Academy, a school serving kids from some of the toughest neighborhoods in Boston which she helped turn into one of the city's most successful.
[[nid:27104]]

“I wanted to come to TechBoston so that the rest of America can see how it’s done,” said the President after touring this innovative school.  He was joined by Melinda Gates, one of the benefactors who have helped turn a school serving kids from some of the toughest neighborhoods in Boston into one of its most successful.  As the President put it:

Every day, TechBoston is proving that no matter who you are, or what you look like, or where you come from, every child can learn.  Every child can succeed.  And every child deserves that chance. 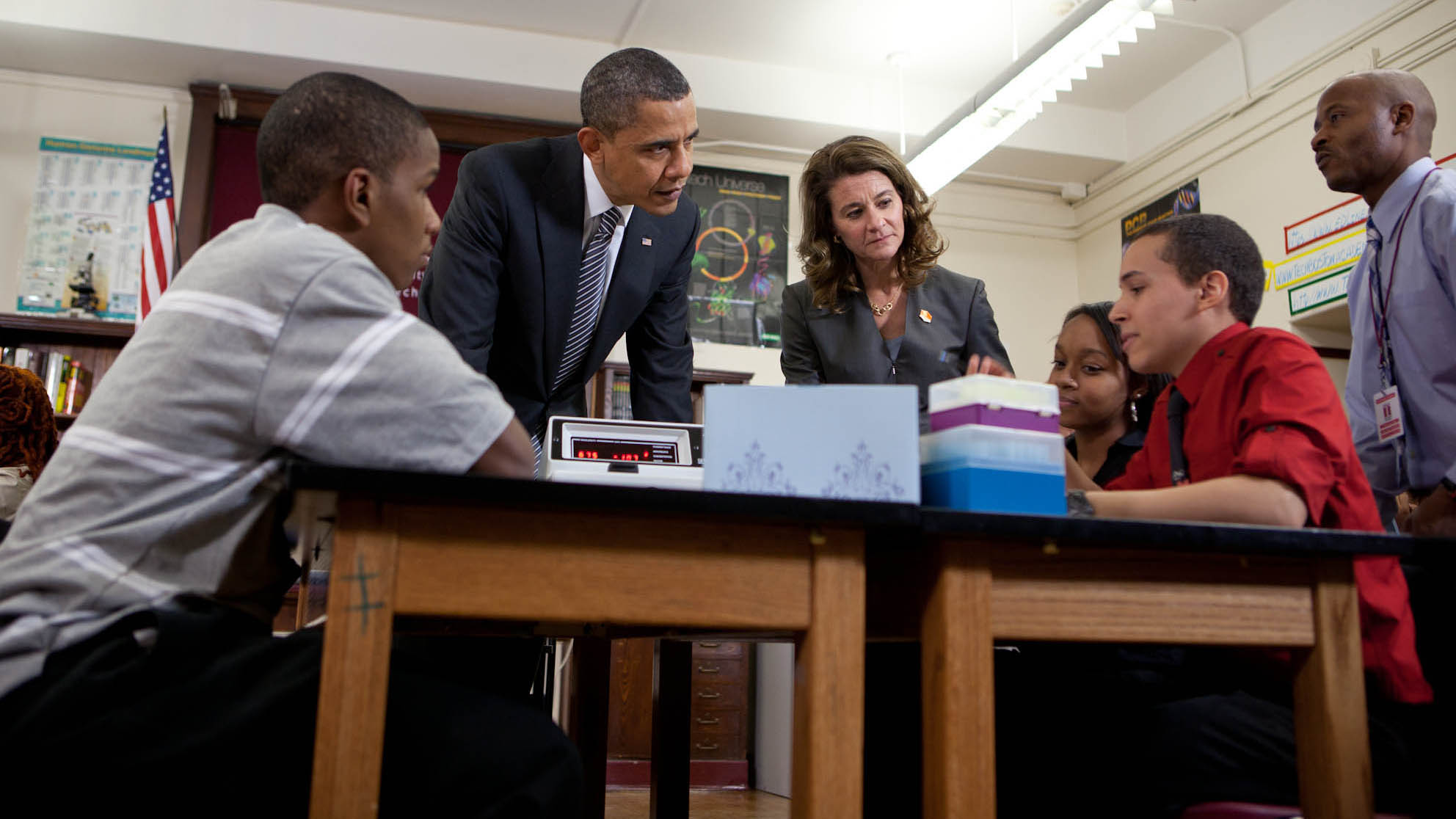 The President went on to lay out the principles that will be guiding him as he fights both to maintain investments in our education system, and to reform it:

What’s happening here is working.  We know what works.  What’s required, then, to get results from any school is no longer a mystery.  And that means there can’t be any more excuses -- from anybody.  As a nation, we have a moral and economic imperative to give every child the chance to succeed.  And that’s why I set a goal when I took office, that by the end of the decade, America will once again have the highest proportion of college graduates in the world.  We will be number one again.  (Applause.)

Now, to achieve this goal, everybody is going to need to do their part.  We need the help of philanthropists like Melinda Gates.  We’ll need the help of the businesses that are partnering with TechBoston.  We need citizens and parents to get involved, because nothing we do in school with make much of a difference unless we instill in our kids the self-confidence and the self-discipline and the work ethic that are at the heart of success not just in school but in life.

So some of you may have come from a tough neighborhood, but you’ve got some parents at home, you’ve got somebody at home who’s nagging you and staying on top of you and saying you can succeed.  And I’m assuming somebody who’s also turning off the TV set once in a while and saying, put away the video games and do your homework.  That has to be a critical ingredient in success.

We need to recognize that the true path to reform has to involve partnerships between teachers and school administrators and communities.  And we’ll need a national education policy that tries to figure out how do we replicate success stories like TechBoston all across the country.

So that’s what Arne Duncan’s job is, and that’s what he’s been doing so well over the last few years.  Instead of pouring money into a broken system, under Arne’s leadership, what we’ve done is we’ve launched a competition.  We call it Race to the Top.  (Applause.)  We call it Race to the Top, and it’s basically a challenge to states and school districts, prove to us that you’re serious about reform.  We’ve said to all 50 states, if you show us the most innovative plans for improving teacher quality and improving student achievement, then we’ll show you the money.  And for less than 1 percent of what America spends on education each year, Race to the Top has led over 40 states to raise their standards for teaching and learning -- standards, by the way, that were developed not in Washington but by Republican and Democratic governors all across the country.

So at the grassroots level, at the state level, standards were developed.  And we said, show us how you’re going to meet these standards.  The more innovative you are, the more money you can get for your schools.   And that’s the kind of bottom-up approach that we need to follow.  This year we’re going to have to work with Congress to fix No Child Left Behind, and we’re going to have to replace it with a law that does a better job focusing on responsibility and reform and, most of all, results.  (Applause.)

We’re also trying to give school districts more flexibility to open charter schools and pilot schools like TechBoston, so that they have the flexibility, the autonomy, to do what’s best for students.  We’re working to make sure every school has a 21st-century curriculum like you do.  And in the same way that we invested in the science and research that led to the breakthroughs like the Internet, I’m calling for investments in educational technology that will help create digital tutors that are as effective as personal tutors, and educational software that’s as compelling as the best video game.  I want you guys to be stuck on a video game that’s teaching you something other than just blowing something up.  (Applause.)

And because we know that the single most important factor in a student’s success after their parent is the person standing at the front of the classroom, we are looking to make teaching one of the most honored professions in our society.  (Applause.)