Ambassador Susan Rice, the U.S. Permanent Representative to the United Nations, marked the 100th Anniversary of International Women’s Day on March 8th in East Harlem, New York. There she urged tomorrow’s strong woman leaders, the 11th and 12th grade classes of The Young Women’s Leadership School (TYWLS) of East Harlem, to continue to win their future through education. 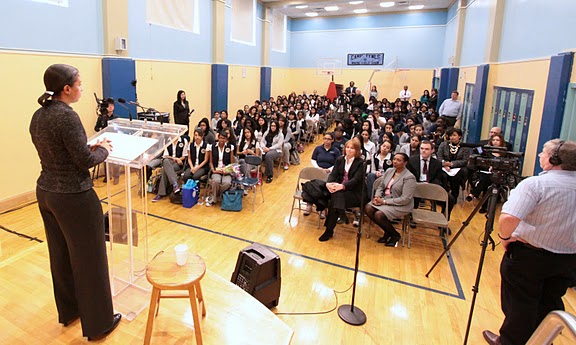 Ambassador Susan Rice speaks to roughly 120 students and staff from The Young Women’s
Leadership School of East Harlem on March 8, 2011

These young women, primarily low-income students of color, have a remarkable legacy to uphold: for ten straight years, every single senior at TYWLS of East Harlem has been accepted to college with significant financial aid.  Ambassador Rice spoke to roughly 120 students and teachers who gathered in the school’s multi-purpose gymnasium on 106th Street. “There is no greater source of empowerment and success,” she said, “than to have, and to insist upon getting the best education.”

After the event, Ambassador Rice met and snapped photographs with Jo’Nella Queen Ellerbe, Marjana Chowdhury, and Tiara Kittrell, seniors who have been accepted to prestigious universities and who delivered introductory and closing remarks on Tuesday. Together with their classmates, these young women carry on with their “most important asset,” as Ambassador Rice called it: “the education that you are getting, and the education that you will continue to get when you leave this great school.”

Taara Rangarajan is a Special Assistant at the U.S. Mission to the United Nations