March 10, 2011 at 1:05 PM ET by Jesse Lee
Twitter Facebook Email
Summary:
The President and First Lady Michelle Obama discuss how we can all work together to end bullying as an accepted practice and create a safer environment for our kids to grow up in.
[[nid:27283]]

“If there’s one goal of this conference, it’s to dispel the myth that bullying is just a harmless rite of passage or an inevitable part of growing up.  It’s not.”  That’s how the President explained the first-ever White House Conference on Bullying Prevention during the opening session of the day-long summit.  And judging by the attention, passion, and intense interest that the issue has generated over the past few days, it’s a sentiment that millions of Americans share, and hopefully all of this discussion will help those who want to break unfortunate traditions to realize they’re not strange or alone.

The President was joined by First Lady Michelle Obama on stage, who gave her own opening remarks:

So as parents, we know we need to make a real effort to be engaged in our children’s lives, to listen to them and be there for them when they need us.  We need to get involved in their schools and in their activities so that we know what they’re up to, both in and out of the classroom.  And when something is wrong, we need to speak up, and we need to take action.

That’s just what Jacqui Knight did.  She’s a mom from Moore, Oklahoma, who’s here with us today.  We got a chance to spend some time with her before.  But when her child was bullied, she got together with other parents and planned community meetings where parents and students could share their stories.  They also held meetings for the public to raise awareness about bullying.  And they’ve been meeting with the school board and superintendent to discuss steps that they can take to keep their kids safe.

But parents aren’t the only ones who have a responsibility.  We all need to play a role -- as teachers, coaches, as faith leaders, elected officials, and anyone who’s involved in our children’s lives.  And that doesn’t just mean working to change our kids’ behavior and recognize and reward kids who are already doing the right thing.  It means thinking about our own behavior as adults as well. 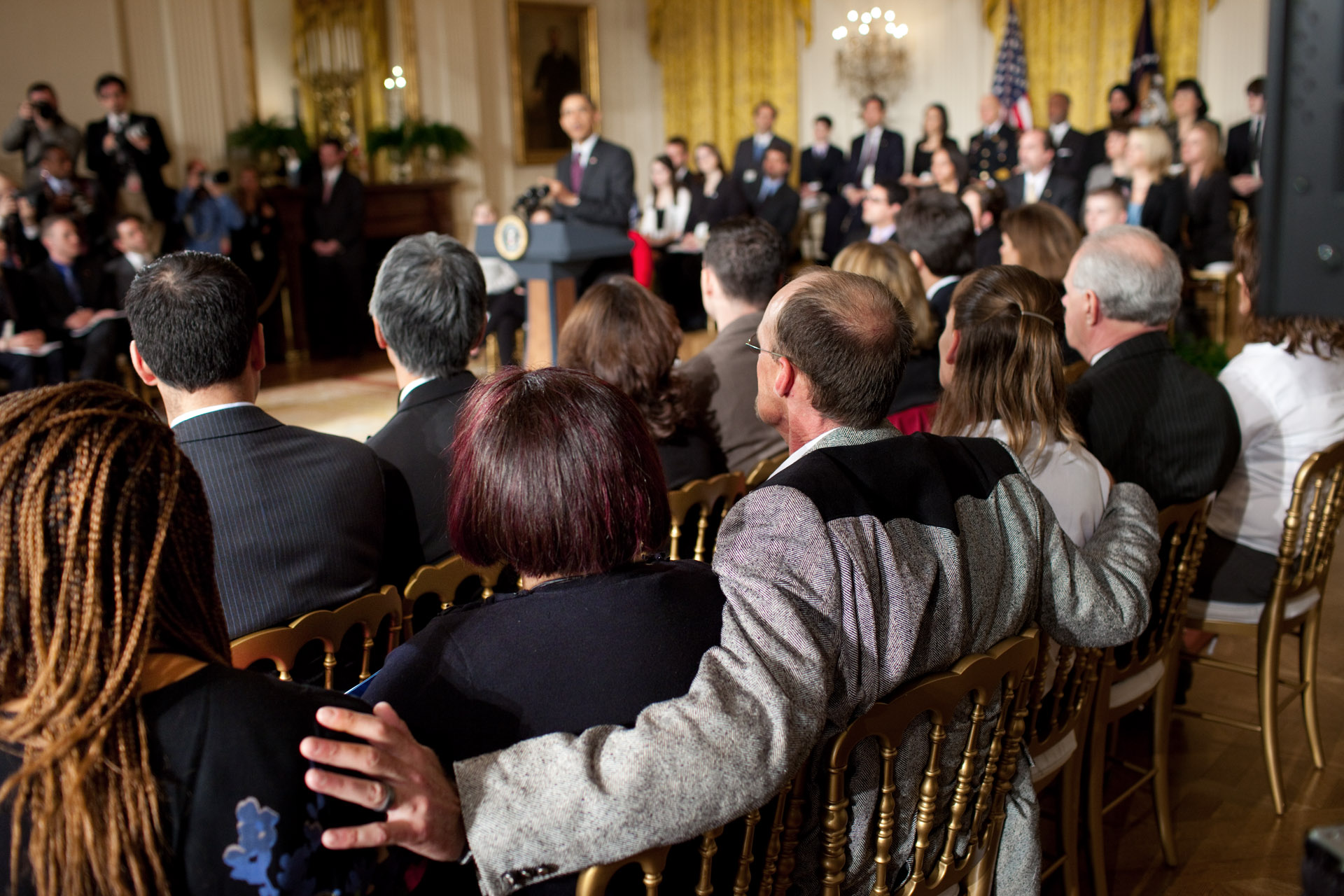 Kirk Smalley, step-father of 11-year-old Ty Field who committed suicide in May 2010 after 2 years of school bullying, comforts wife Laura, right, and another family as they listen to President Barack Obama at the Conference on Bullying Prevention in the East Room of the White House, March 10, 2011. (Official White House Photo by Pete Souza)

The President spoke not only as the host of the Conference, but as a father and as somebody who remembers his own childhood well:

As adults, we all remember what it was like to see kids picked on in the hallways or in the schoolyard.  And I have to say, with big ears and the name that I have, I wasn’t immune.  (Laughter.)  I didn’t emerge unscathed.  But because it’s something that happens a lot, and it’s something that’s always been around, sometimes we’ve turned a blind eye to the problem.  We’ve said, “Kids will be kids.”  And so sometimes we overlook the real damage that bullying can do, especially when young people face harassment day after day, week after week.

So consider these statistics.  A third of middle school and high school students have reported being bullied during the school year.  Almost 3 million students have said they were pushed, shoved, tripped, even spit on.  It’s also more likely to affect kids that are seen as different, whether it’s because of the color of their skin, the clothes they wear, the disability they may have, or sexual orientation.

And bullying has been shown to lead to absences and poor performance in the classroom.  And that alone should give us pause, since no child should be afraid to go to school in this country.

Today, bullying doesn’t even end at the school bell -- it can follow our children from the hallways to their cell phones to their computer screens.  And in recent months, a series of tragedies has drawn attention to just how devastating bullying can be.  We have just been heartbroken by the stories of young people who endured harassment and ridicule day after day at school, and who ultimately took their own lives.  These were kids brimming with promise -- kids like Ty Field, kids like Carl Walker-Hoover -- who should have felt nothing but excitement for the future.  Instead, they felt like they had nowhere to turn, as if they had no escape from taunting and bullying that made school something they feared.  I want to recognize Ty’s mom and dad who are here today; Carl’s mother and sister who are here today.  They’ve shown incredible courage as advocates against bullying in memory of the sons and the brother that they’ve lost.  And so we’re so proud of them and we’re grateful to them for being here today.  (Applause.)

No family should have to go through what these families have gone through.  No child should feel that alone.  We’ve got to make sure our young people know that if they’re in trouble, there are caring adults who can help and young adults that can help; that even if they’re having a tough time, they’re going to get through it, and there’s a whole world full of possibility waiting for them.  We also have to make sure we’re doing everything we can so that no child is in that position in the first place.  And this is a responsibility we all share -- a responsibility we have to teach all children the Golden Rule:  We should treat others the way we want to be treated. 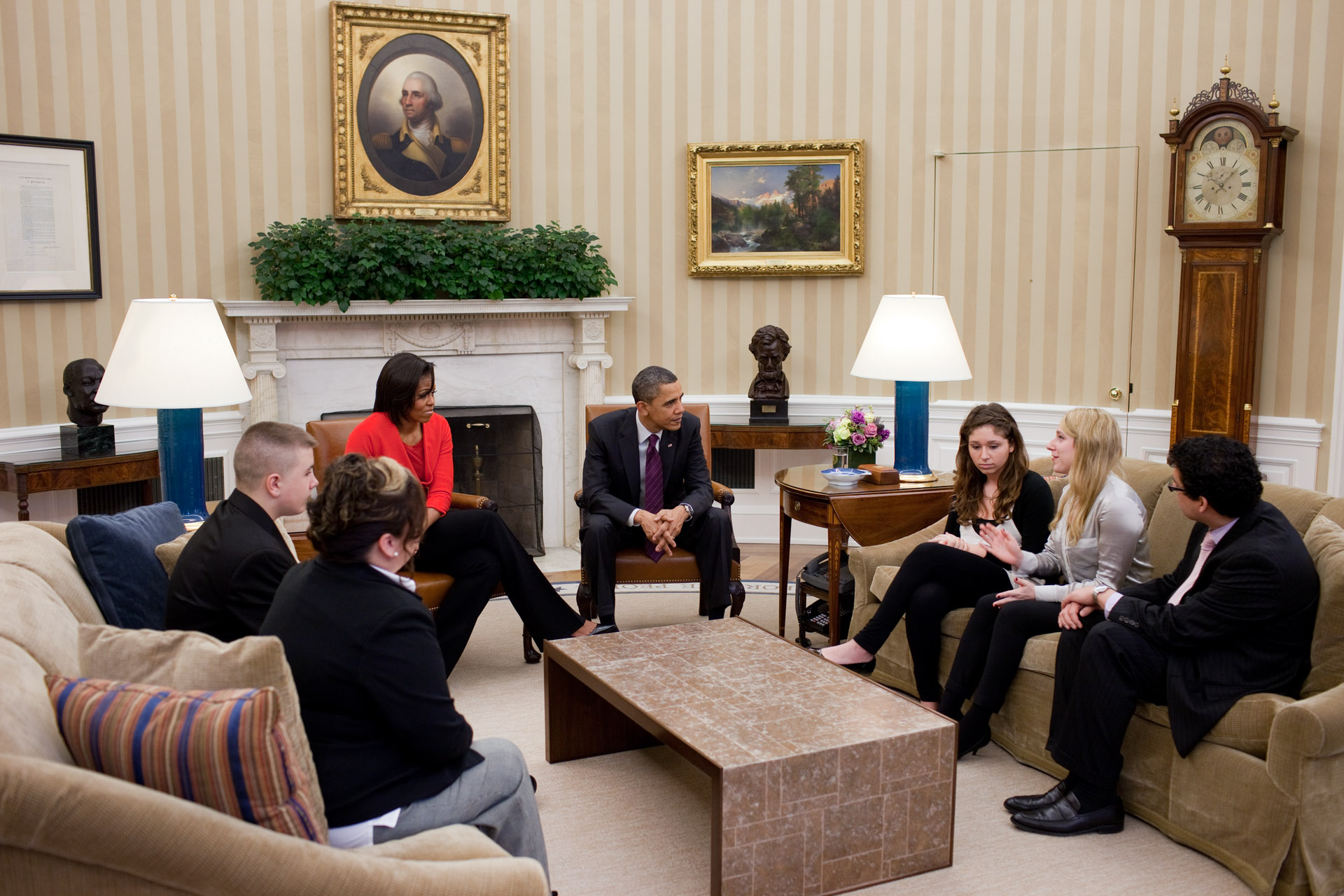 President Barack Obama and First Lady Michelle Obama meet with a group of students and parents from the Conference on Bullying Prevention in the Oval Office, March 10, 2011. (Official White House Photo by Pete Souza) 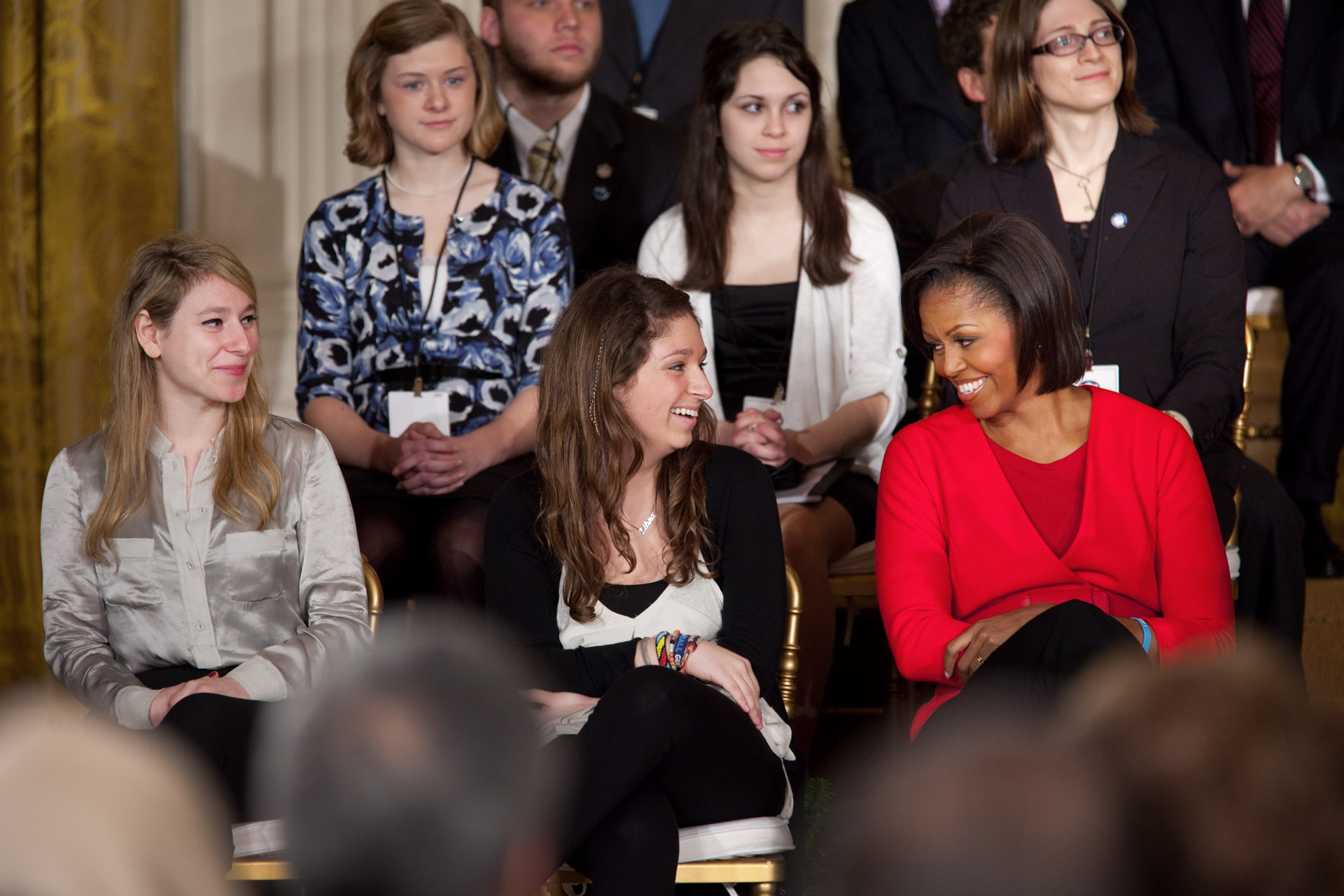 First Lady Michelle Obama talks with Emily, left, and Sarah Buder, authors of 'Letters to a Bullied Girl: Messages of Healing and Hope,' during the Conference on Bullying Prevention in the East Room of the White House, March 10, 2011. (Official White House Photo by Samantha Appleton)