President Obama: "It’s Not Enough to Leave No Child Behind. We Need to Help Every Child Get Ahead."

March 14, 2011 at 12:42 PM ET by Jesse Lee
Twitter Facebook Email
Summary:
The President lays out his principles for fixing No Child Left Behind and reforming our education system.
[[nid:28321]]

"I want every child in this country to head back to school in the fall knowing that their education is America’s priority.  Let’s seize this education moment.  Let’s fix No Child Left Behind."  The audience at Kenmore Middle School in Virginia gave loud applause when the President announced that mission this morning.  It's no small task, but it will be work informed by about a decade of lessons from NCLB's successes and failures, as well as two years of lessons from the President's innovative approaches like Race to the Top that leverage small investments to incentivize big reforms from the bottom up.  The President's priorities and key changes from No Child Left Behind are laid in the White House fact sheet put out this morning -- here's the topline: 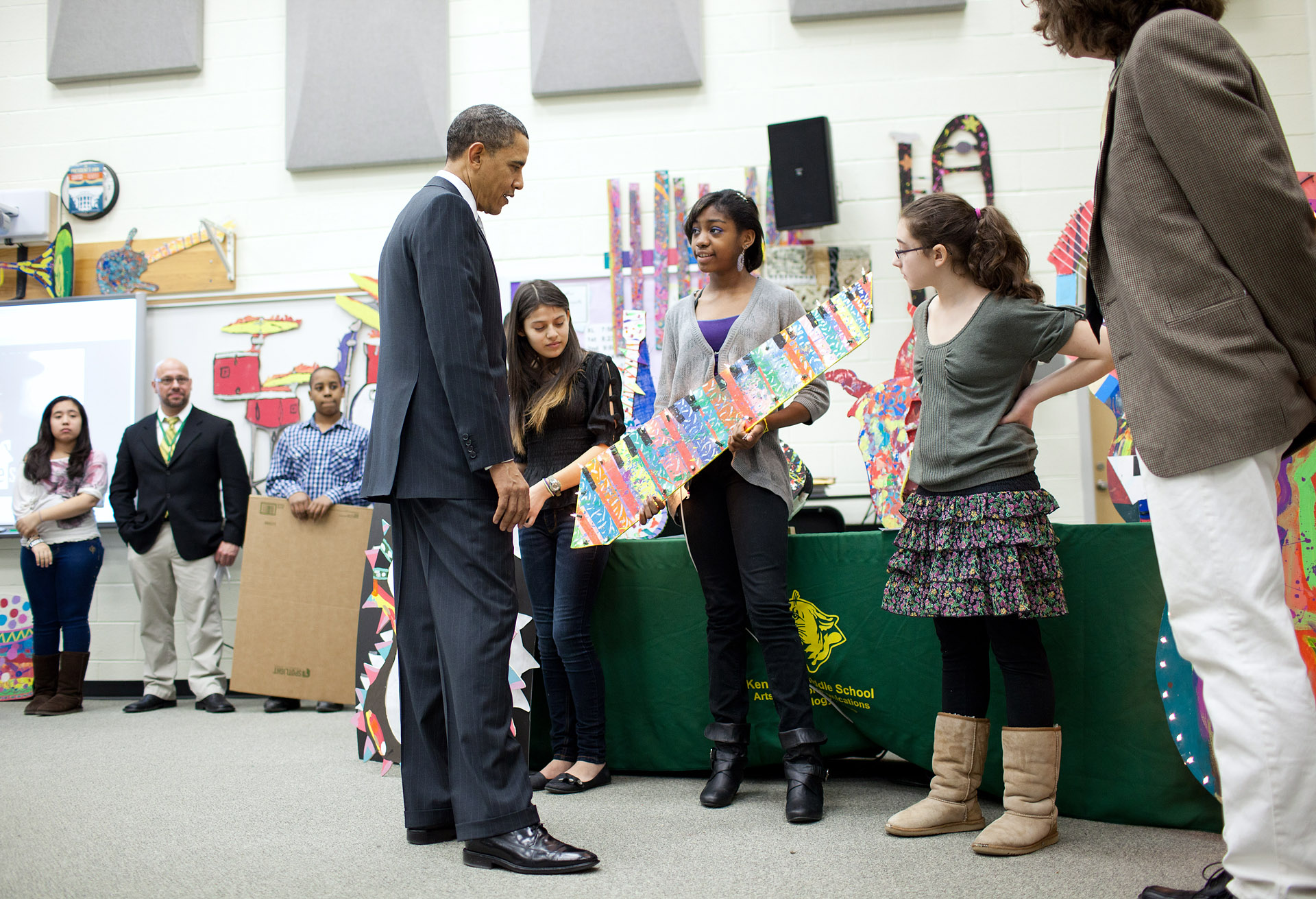 So while applauding the goals of No Child Left Behind, the President spoke at length about the problems that need to be addressed if our education system is going to help us win the future by getting America back to the front of the pack in graduation rates and career-readiness:

Now, last week we got a reminder of why it’s so critical that we reform this law.  According to new estimates, under the system No Child Left Behind put in place, more than 80 percent of our schools may be labeled as failing -- 80 percent of our schools.  Four out of five schools will be labeled as failing.  That’s an astonishing number.  And our impulse is to either be outraged that the numbers are so high, or skeptical that they’re even true.  And let’s face it, skepticism is somewhat justified. We know that four out of five schools in this country aren’t failing.  So what we’re doing to measure success and failure is out of line.

In fact, the list of supposedly failing schools includes schools that are actually making extraordinary progress -- including Kenmore.  So, yes, we’ve still got more work to do here at this school to close the achievement gap.  I think Dr. Word would agree with that.  We’ve got to make sure that every student is on track.  But, I mean, we can see here at Kenmore -- Kenmore is thriving.  You guys are doing great.  You got more work to do, but you’re doing fine.  (Applause.)

So what this means, though, is that we need a better way of figuring out which schools are deeply in trouble, which schools aren’t, and how we get not only the schools that are in really bad shape on track, how do we help provide the tools to schools that want to get even better to get better.

That way of measuring success and failure, that’s the first problem with No Child Left Behind that we need to fix.  Instead of labeling schools a failure one day and then throwing up our hands and walking away from them, we need to refocus on the schools that need the most help.  We need to hold our schools accountable for the success of every child –- black, white, Latino, Asian, students with disabilities, English language learners.

We need to make sure some of our best teachers are teaching in some of our worst schools.  We need to reward schools that are doing the difficult work of turning themselves around.  (Applause.)  We’re going to have to take a series of steps across a broad range of measures to not only target our most troubled schools, but also raise expectations for all our schools.

So first we’re going to have to fix how schools are labeled and identified.  But we’ve got to do more than that.  In recent years, 15 states have actually lowered their standards to make it easier for their kids to meet the targets set by No Child Left Behind.  Think about that.  That was -- that’s a pretty perverse incentive when states say to themselves, you know what, let’s lower our standards so that we have an easy time -- easier time passing those standards so that we don’t get punished under No Child Left Behind.  That makes no sense.  That’s inexcusable.

So instead of measuring students based on whether they’re above or below an arbitrary bar, we need to set better standards to make sure our students are meeting one clear goal –- they’re graduating ready for college and ready for a career.  That’s the goal we need to set.  (Applause.)    To know whether our kids are on track to meet that goal, we need better assessments.

Now, I want to speak to teachers in particular here.  I’m not talking about more tests.  I’m not talking about teaching to the test.  We don’t need to know whether a student can fill out a bubble.  We do need to know whether they’re making progress.  We do need to know whether they’re not only mastering reading, math, and science, but also developing the kinds of skills, like critical thinking and creativity and collaboration that I just saw on display with the students that I met here.  Those are skills they’re going to need for the rest of their lives -- (applause) -- not just to be good workers, but to be good citizens.  (Applause.)

Now, that doesn’t mean testing is going to go away; there will be testing.  But the point is, is that we need to refine how we’re assessing progress so that we can have accountability without rigidity -- accountability that still encourages creativity inside the classroom, and empowers teachers and students and administrators.

Of course, we also know that better standards, better assessments and a better curriculum won’t make a difference without outstanding teachers.  Every day in this country, teachers are doing a heroic job for their kids -- (applause) -- every day.  They’re taking on the problems that follow students into class, come in early to re-write lessons, spending hours after school tutoring students.  I know; my sister is a teacher. In South Korea, teachers are known as “nation builders,” and I think it’s time we treated our teachers with the same level of respect right here in the United States of America.  (Applause.)