March 29, 2011 at 3:07 PM ET by Jon Carson
Twitter Facebook Email
Summary:
Jon Carson, former Peace Corps Volunteer in Honduras and Director of the White House Office of Public Engagement, illustrates the power of service and the importance of working with, not for, a community. 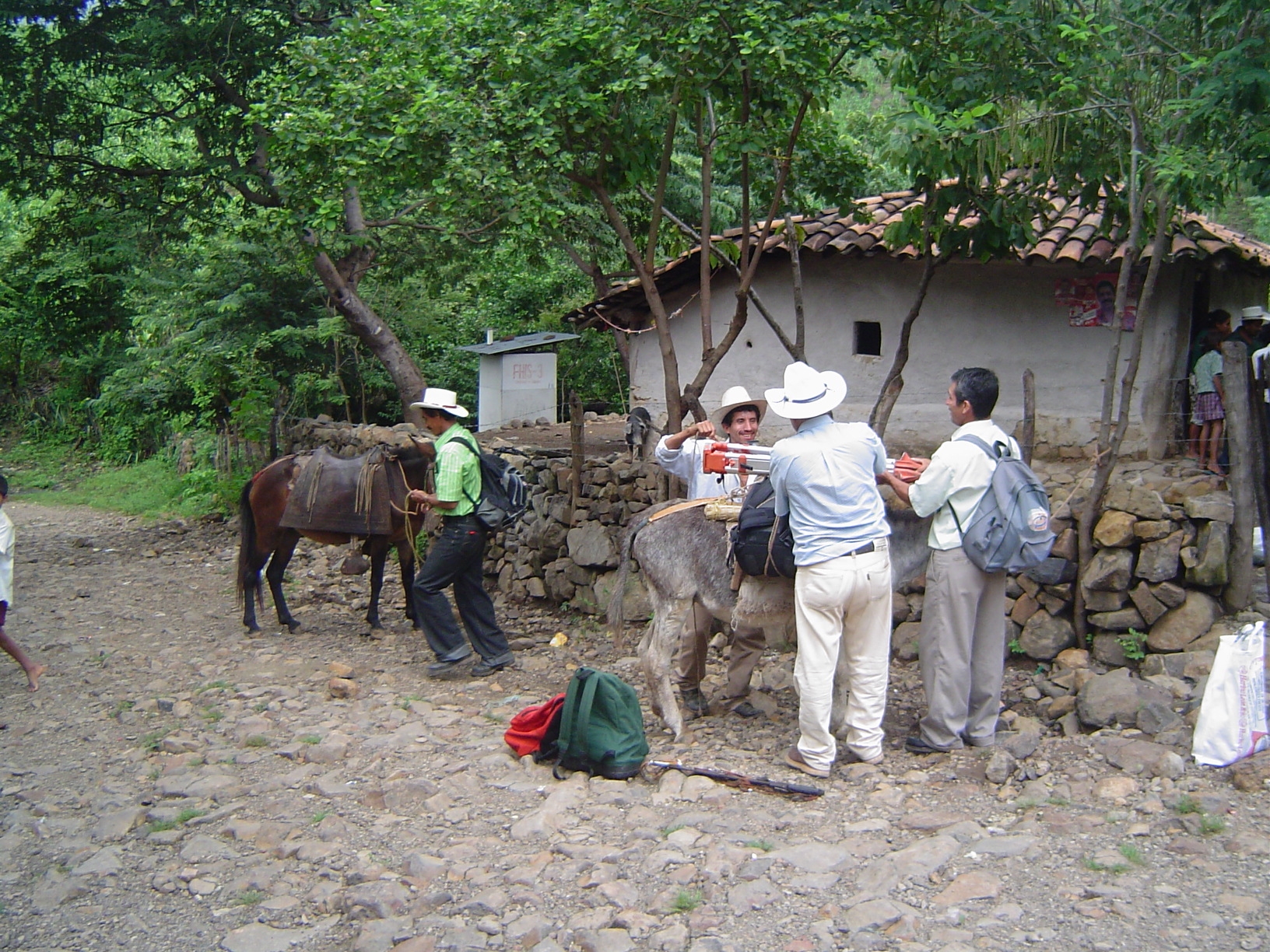 Loading up survey equipment and heading out to a rural Honduran village. March 29, 2011. (by Jon Carson)

This last Sunday, in between playing with my two year old and helping my wife with our new baby, I got a call from my friend Dagoberto Nunez that brought back a flood of memories from my two years of service as a Peace Corps Volunteer.

The first time I met Dagoberto I was a Peace Corps Volunteer newly arrived in Honduras.  I was assigned to work on water and sanitation projects in the southern part of the country, helping Non-Governmental Organizations (NGOs) that provided the funds to build water systems in small rural villages.  I lived in the central city of Choluteca and would ride out by bus, pickup, or the occasional mule, to villages to work on the water projects.  I would complete a land survey of the village, design the system, and then hand it all over to a Maestro de Obra, or project manager, who would actually supervise the construction of the water system.

Dagoberto was a Maestro, and on a visit early in my service to a project under construction, I first got to see him in action.

Installing a water system involves installing miles of plastic and metal tubing, building multiple concrete structures to capture and store the spring or ground water, building a 10,000 gallon (or more) tank to hold the water, and then installing a distribution system through the village with a water tap for everyone.  All of the labor to build and install the system was volunteered by the villagers receiving the system.  In order to manage one of these projects, a Maestro de Obra had to be a master craftsman, trainer and coach to the villagers who had never built one of these systems before, and have the political savvy to deal with the local governments and village politics that might get in the way of finishing a project.

Dagoberto was all of these, and the best Maestro de Obra I worked with during my two years in Honduras.  My basic job as the surveyor and engineer was to make sure the water could get from Point A to Point B.  The moment of truth would come after months of backbreaking labor by the villagers: digging a three foot trench by hand from the spring to the tank location, carrying hundreds of pipes over hills and across ravines, and installing them.  Then you turn on the valve, and wait to see if water shows up at the other end.

The picture below is from one of those moments about a year into my service.  Dagoberto stood next to the pipe as water poured out onto the tank site of one of the toughest surveys and designs I’d completed.  I remember asking myself at that moment: with everything else he and other local Maestro de Obra’s were capable of, why couldn’t they also learn how to do my part of it? 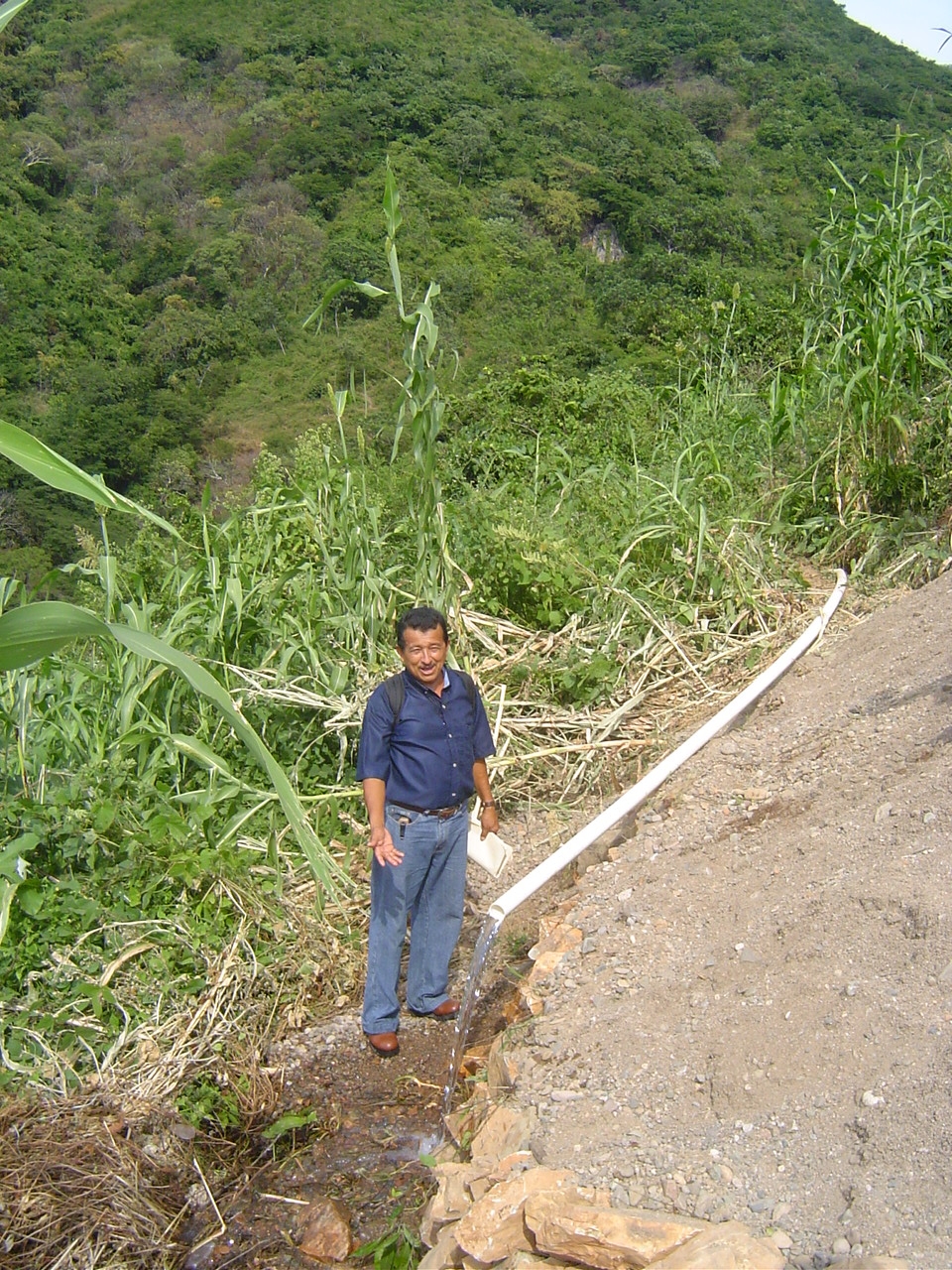 Dagoberto showing off a water pipe successfully bringing water to a village. March 29, 2011. (by Jon Carson)

It turned out that they could, and that the major obstacle in their way was access to the surveying equipment needed and someone to teach them how to use it.  While I continued to complete surveys myself in my second year of Peace Corps service, I spent the majority of my time helping Dagoberto and other local Maestro de Obra’s become surveyors themselves.  I wrote to engineering companies in the United States and received half a dozen donated surveying instruments that we could use.  I then partnered with another local Peace Corps Volunteer, David Lawler, to develop an eight week long beginners surveying course that the local non-profit community college sponsored.  Thirty local Hondurans enrolled.  Eight weeks later, 25 of them graduated.  After the course, I spent extra time out in the field with a small group of the graduates who planned to form a small cooperative of surveyors utilizing the donated equipment.

When you are completing a land survey like the ones we did to design water systems, the only way you know the accuracy of your measurements is to survey in a large circle and make your way back to the point you started from.  This is called “closing the loop”.  The only problem is that you don’t know how you did until you take the measurements back and make all the calculations.  The day I went with Dagoberto and his team out to a small village for their first survey, I was more nervous than they were.  For an entire day I watched quietly and anxiously as they made their way from the spring in the mountains down to the local village, making hundreds of measurements.  My one requirement was that they survey back up to the starting point to “close the loop” so we could see how they did.

A long and dusty bus ride back down to my house and a couple hours of data entry later, I had my answer:  Dagoberto and his team had nailed it.  Five miles of measurements across the village, and they were accurate to within inches.  I was so excited I ran outside and hugged one of the neighbor kids playing in the street.

That was 5 years ago.  Dagoberto and his team are still surveying and partnering with NGOs who are supporting the water projects.  Now instead of receiving a survey for free, villages have to raise the money to pay Dagoberto and his team for a survey.  This invariably means they take the survey and water project more seriously because they had to pay for it, which leads ultimately to a better water system, and a better approach to community development.

Most returned Peace Corps Volunteers will tell you that they get more out of their service for many years afterwards than they feel they gave to their host country; I couldn’t agree more.  And getting a call from Dagoberto on a Sunday morning to “close the loop” was one of those moments.