Today’s employment report shows that private sector payrolls increased by 230,000 in March, marking 13 consecutive months of private employment growth. Private sector employers added 1.8 million jobs over that period, including more than half a million jobs in the last three months. The unemployment rate fell for the fourth straight month to 8.8 percent. The full percentage point drop in the unemployment rate over the past four months is the largest such decline since 1984, and, importantly, it has been driven primarily by increased employment, rather than people leaving the labor force.

As long as millions of people are looking for jobs, there is still considerable work to do to replace the jobs lost in the downturn. Nonetheless, the steep decline in the jobless rate and the solid employment growth in recent months are encouraging. The last two months of private job gains have been the strongest in five years. We are seeing signs that the initiatives put in place by this Administration – such as the payroll tax cut and business incentives for investment – are creating the conditions for sustained growth and job creation.   We will continue to work with Congress to find ways to reduce spending, so that we can live within our means and focus on the investments that are most likely to help grow our economy and create jobs - investments in education, infrastructure, and clean energy.

In addition to the increases last month, the estimates of private sector job growth for January (now +94,000) and February (now +240,000) were revised up significantly. Overall payroll employment rose by 216,000 in March. Payroll employment grew in almost every sector. Solid employment increases occurred in professional and business services (+78,000), education and health services (+45,000), leisure and hospitality (+37,000), wholesale and retail trade (+31,800), and manufacturing (+17,000). Local government experienced a decline of 15,000, and has shed jobs in 16 of the past 17 months. 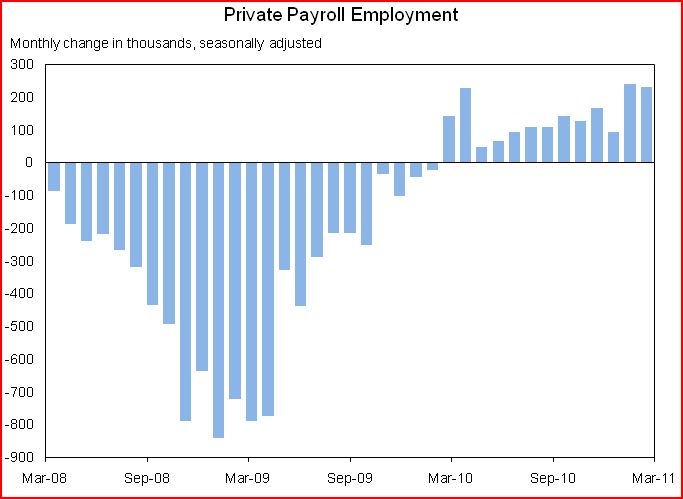