You Give A Lot, You Get A Lot: A Story Celebrating Service 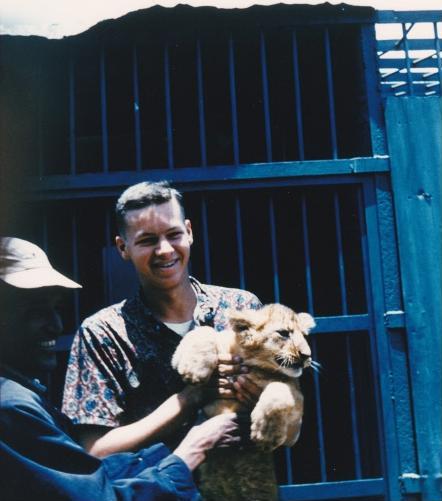 Tom Petri during his Peace Corps service in Somalia. April 8, 2011. (by Office of Congressman Tom Petri)

I responded to President Kennedy's call and applied to the Peace Corps in 1961.  Had I gone, I would have served in Ethiopia with Paul Tsongas, the late Democratic senator from Massachusetts.  But I got into Harvard Law School, and told the Peace Corps that perhaps I could do something law-related after I graduated.  The Peace Corps got back in touch with me three years later, and I went off to Somalia to help organize its legal code.

Since that time Somalia has had terrible problems.  Obviously, the Peace Corps can't turn every nation away from disaster.  As representatives of the American people, our jobs was to assist the Somali people to improve their situation.  In the end, there were greater forces at work, but we helped to improve lives for a while and showed that Americans can work in a peaceful, cooperative spirit with others for the benefit of everybody.

While in Somalia, I learned quite a bit about how the world works in practice and not just in theory, and these lessons have informed my public service ever since.

For instance, we Americans tended to have a "We'll show you how to do it" attitude while the British had learned over decades of empire building that it was better to take an approach which said, "We'll work with you and learn from you and try to work together on things."

An example of the American approach:  We saw the obvious need for water in the parched country, and set about drilling wells.  But no one really had ownership of the wells, which meant that they weren't maintained.  Instead, nomads would come to the wells, make use of them, and then fill them in before moving on so the next group wouldn't benefit.

Another example:  To upgrade the livestock in the country, our aid people had the idea of bringing in good, productive Rhode Island Red chickens, without fully realizing that Somalis let their chickens roam and survive on the land - something our chickens were not equipped to do.

We didn't want to just give chickens away, so we would make the Somalis bring in their scrawny chickens in exchange.

The Somalis quickly discovered that our chickens were not particularly good at surviving, but were very good for eating.  So, they would always wait until it was time to kill a chicken, and then they would take one or more of their scrawny chickens and make an exchange for Rhode Island Reds, and then slaughter them.

This did not have a long-term impact on improving Somali livestock.  But it certainly made a few Somali festivals a little happier.

I learned from this that government programs should be thought through, and that unintended consequences should be expected.  I am sure that with time and experience, Peace Corps management has learned these lessons from early blunders as well.

Even with the missteps, I knew we were doing important work.  I was with two other Peace Corps lawyers in Somalia, but there were also dozens of Volunteers in the country who were teachers, community health workers, and school builders.  They provided real services to their host communities, and they built personal relationships that aided understanding between the two nations.

I can still remember the quizzical but interested reaction that so many people in Somalia had when they saw Americans engaged in a project:  "Who are you?"  "Why are you doing it?"  "Explain that to me again."

The spirit was catching, and they would end up participating in all kinds of little volunteer activities and things that they hadn't thought of doing themselves, all working together.

People ask me about the Peace Corps, and I always say that one of the things you have to remember about it is that you get a lot more than you give.  You're serving other people, and you can get great satisfaction from trying to make the world, or at least a small piece of it, a better place.  And while you're serving, you're learning.  You learn about another culture; and at the same time, you're learning about your own country and your own experiences because of the points of contrast.

What a wonderful thing it is that America has now tens of thousands of people who have served in the Peace Corps, who have returned and are now in every walk of life - working in international organizations and in business, knowing different cultures and different languages - thereby providing a dimension to our own national life that we would otherwise not have.  We all benefit as a result.

Congressman Tom Petri served in the Peace Corps in Somalia from 1966-67 and currently represents the 6th Congressional District of Wisconsin.