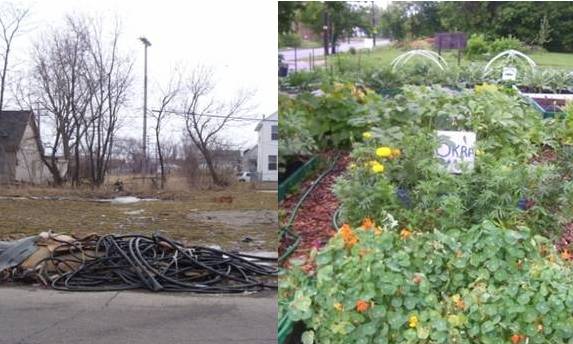 There are two tales of Detroit – one of vacant lots and unemployment, the other of strong communities and regeneration.  As urban planners and city officials work to maintain essential infrastructure for the more than 740,000 city residents, Mark Covington turns empty lots into community assets.  He says “Detroit is peaceful because it’s not a typical city – there is so much space between the houses and my neighbors are people I grew up with.”

In 2008 Mark Covington lost his job and moved back to his childhood home in Detroit.  That spring, he noticed that melting snow was catching on garbage and flooding a lot near his home that had been empty for decades.  He started picking up the trash, but soon realized that removing debris alone would not stop people from using empty lots as dumping grounds.  He convinced his mother and a friend to help him clean up the lot and plant a garden.  As they spent more time in the garden, curious neighbors stopped by and began sharing their stories with Mark and with each other.  He talked to many people with difficult choices – families forced to decide between paying electricity bills, purchasing groceries, and filling prescriptions.  While the garden became a source of nutritious food, the real power of the garden was in bringing neighbors together. 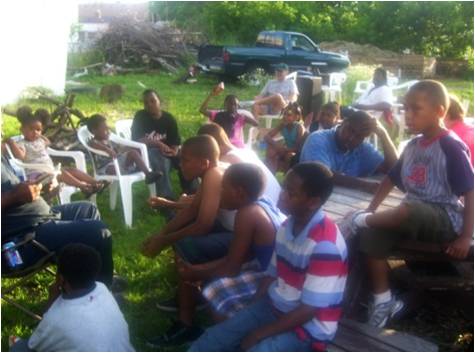 Through persistence and dedication, what started as one man cleaning up an empty lot has transformed into a community movement – The Georgia Street Community Collective.  A neighbor sent her foster children to help in the garden.  They brought along a few friends, and soon Mark found himself acting as a mentor to the children.  As more people became involved and new ideas were suggested, he helped to turn these visions into reality.  Eventually, Mark and the Collective took on the responsibility of cleaning up and maintaining 18 different lots.  Three became community gardens and one was turned into an orchard.  In the summer, some lots are even used as outdoor movie theaters.  The Collective has been so successful in bringing the community together that it event transformed a once-vacant building into a multi-purpose community room where neighbors help students with homework and host community holiday dinners.

Over the past three years, Mark has received encouragement from unexpected places.  He started out keeping a journal on DetroitYES!, sharing his story and regularly updating the blog with the Collective’s growth.  His followers quickly grew, and some even sent donations.  A record label from England was so inspired by Mark that they came to Detroit and spent a day transforming an empty lot into a "pocket park," which is a small green space for public use.  Initially neighbors were skeptical, but his dedication was contagious.  To others who want to make a difference in their neighborhoods, Mark says “Go for it.  Don’t give up.  If you can’t get something one way, then try something else.”

Mark misses the days of his childhood when there were mom and pop shops and a car dealership in his neighborhood.  He hopes that the work of the Georgia Street Community Collective might spur development in the area.  Using produce from the gardens, he hopes to create opportunities for neighborhood kids to sell produce at local markets.  Someday he might even grow the Collective into a small business.  But for now, Mark enjoys just giving back to his community.  He said “I’m probably more at peace in these past three years than I have been in my whole life.”