Advance Estimate of GDP for the First Quarter of 2011

Today’s report shows that the economy posted the seventh straight quarter of positive growth, as real GDP, the total amount of goods and services produced in the country, grew at a 1.8 percent annual rate in the first quarter of this year.  While the continued expansion is encouraging, clearly, faster growth is needed to replace the jobs lost in the downturn.

Some key components of GDP continued to expand in the first quarter. Consumer spending rose 2.7 percent at an annual rate, boosted by a 2.9 percent increase in real disposable income that was due in part to the cut in payroll taxes. Equipment and software investment increased 11.6 percent. Spending components that subtracted from GDP included construction of nonresidential structures (-21.7 percent), federal spending (-7.9 percent), and state and local government spending (-3.3 percent). On the production side, goods production rose at a 9.3 percent, roughly consistent with the previously-reported 9.1 percent increase in manufacturing industrial production.

These data indicate that the measures put in place by this Administration – such as the payroll tax cut and business incentives for investment – are helping to foster growth.   We will continue to work with Congress to find ways to reduce spending, so that we can live within our means and focus on the investments that are most likely to help grow our economy and create jobs – investments in education, infrastructure, and clean energy. 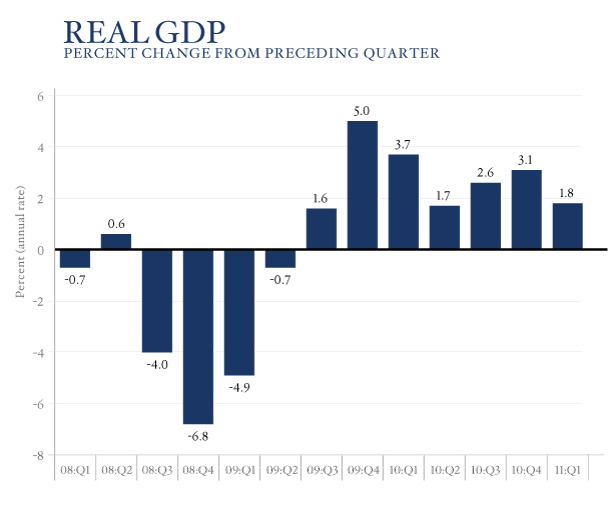