May 3, 2011 at 6:48 PM ET by Karen Richardson
Twitter Facebook Email
Summary:
Last week, Michael Blake and I had the opportunity to address an amazing group of young leaders, brought together by the Africa Society of The National Summit on Africa's Ambassador Andrew Young Lecture Series. This year's series focused on the ability of youth to organize and affect change in their communities.

Last week, the Africa Society of The National Summit on Africa, in partnership with the Embassy of Ghana, hosted me and Michael Blake as the featured speakers for the second installment of the 2011 Ambassador Andrew Young Lecture Series entitled, “Youth, The Vanguard for Change.” In view of the political activism of young people that is taking place on the African continent and around the world, the event focused on the power of youth to influence positive change both here in the United States and abroad.

The event began with the remarks from His Excellency Daniel Ohene Agyekum, Ambassador of Ghana to the United States, and Bernadette Paolo, President & CEO of the Africa Society. Michael and I were then introduced by student leaders from the School Without Walls. We spoke before an audience comprised of government officials, students, non-governmental organizations, and members of the diplomatic corps. 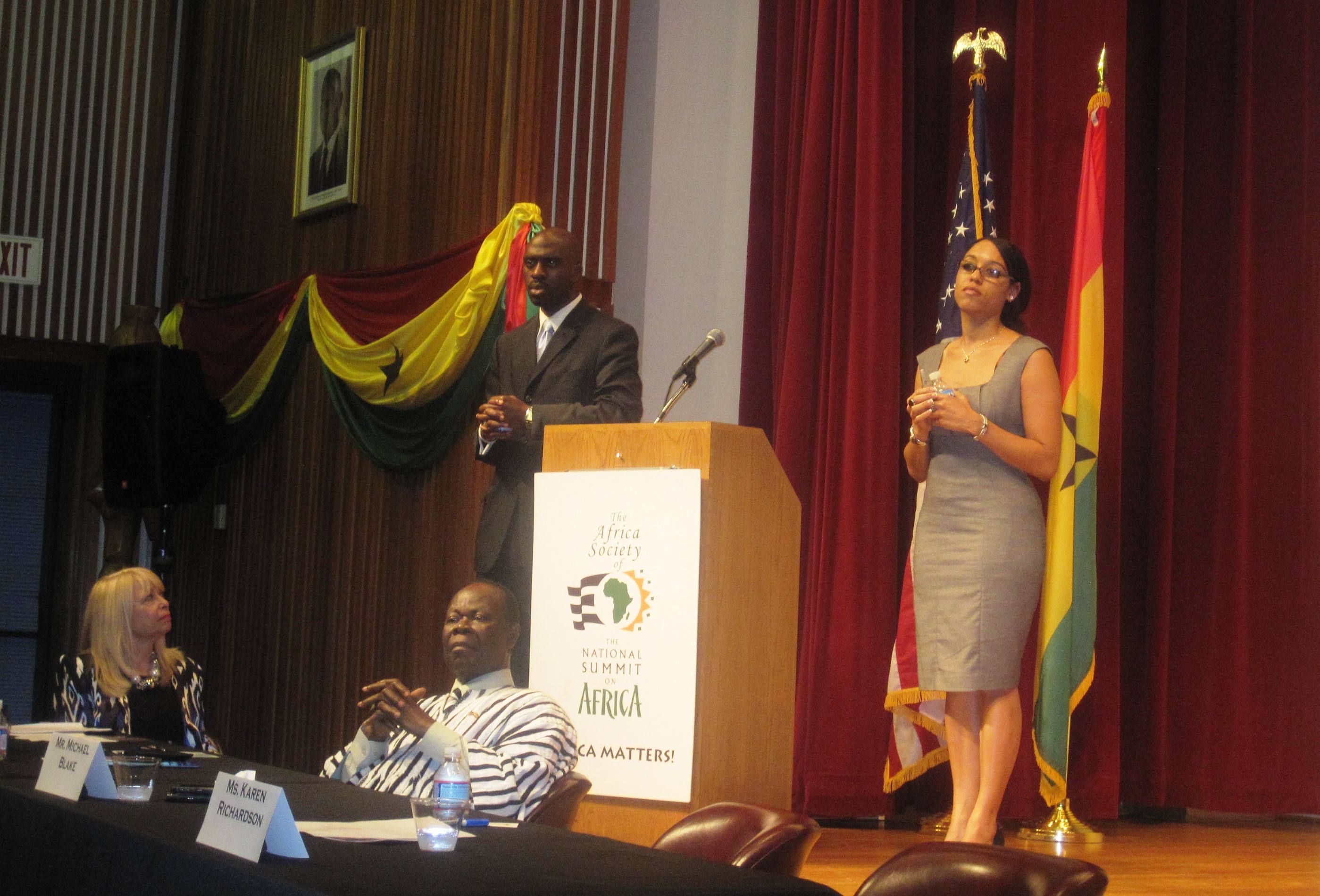 Michael Blake and Karen Richardson, of the White House Office of Public Engagement, deliver the keynote speech at the Africa Society of The National Summit on Africa's 2011 Ambassador Andrew Young Lecture Series. April 28, 2011.

Blake’s presentation centered on the phrase, “We are the ones we’ve been waiting for,” a phrase often used by then-candidate Barack Obama. This phrase aptly reflected an important message of this forum.  Blake challenged listeners to remember that they must not wait for an opportune moment to create positive change within their communities. Instead, Blake encouraged the audience, particularly the youth, to be vanguards of change; to stand ready to shape their own futures.

My remarks focused on the power of youth, particularly those in other countries, to lead their countries into new directions of prosperity and democracy.  I acknowledged the contributions of young people in the recent political revolutions occurring in North Africa and the Middle East. As President Obama discussed in his July 2009 speech to Ghana's parliament, it is now up to the younger generations to help realize the vision of a more peaceful, stable, and prosperous future in their respective countries.

I also discussed this theme in the context of the President’s Young African Leaders Forum (YALF), which was held in the East Room of the White House in August 2010. At this Forum, the President reiterated that it will be the young people, brimming with talent and energy and hope, who can claim the future that so many in previous generations never found.

This lecture was significant inasmuch as it brought together established and budding leaders of all ages, and encouraged them to harness to forge new paths of national growth and innovation.  It is especially timely because youth populations are at the center of this change that is significantly altering the trajectory and landscape of this country and the world.

If the talented youth that we met during this event are any reflection of the potential of youth globally, then I am hopeful about what our world can become. I am hopeful that these high school students and young scholars would be the leaders to solve some of the most complex challenges facing the United States and countries world-wide.