Thank a Teacher in the Military Community This Week!

May 4, 2011 at 4:40 PM ET by Joelle Zarcone
Twitter Facebook Email
Summary:
Did you know that many of the children of our Service members serving around the world are being taught each day of the school year by teachers from the Department of Defense Education Activity?

In addition to being a month of military appreciation, May is also a time to recognize teachers. This week, May 1-7, is Teacher Appreciation Week!

Did you know that many of the children of our Service members serving around the world are being taught each day of the school year by teachers from the Department of Defense Education Activity (DoDEA)? 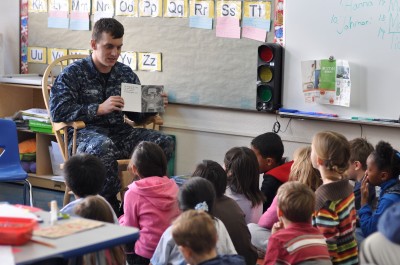 There are approximately 1.2 million school-age military children, all being educated in public, private and home-based schools both across the United States and the globe. Originally established at the end of World War II as a means of educating the children of our troops serving in the Pacific and Europe, the U.S. military created what eventually became the current agency of DoDEA. Now,  DoDEA operates 194 schools in 14 districts worldwide – this includes 12 foreign countries, seven states, Guam, and Puerto Rico!

Every school within DoDEA is fully accredited by U.S. accreditation agencies, and 8,700 educators serve more than 86,000 students.

Due to frequent changes in assignment and deployments of their parent(s), military children are forced to handle a number of issues not known to most school-aged children around the U.S. From attending class in a foreign country at a young age, to adapting to a different school and new community, and focusing on their studies while mom or dad is deployed, military kids can sometimes have a lot on their plate. Luckily there are special individuals serving as teachers within the DoDEA school system to help ease transitions and make them feel at home even when in unfamiliar surroundings.

Since our military are in communities all around the world, not all military children who are school-aged attend these DoDEA schools. Children of Service members attend schools all throughout the United States, and alongside peers who are not a part of military families.

All great teachers make a difference in their students’ lives, and those working within the military communities are no exception.

Please take a moment to thank a DoDEA Teacher on their Facebook page this week, as well as recognize that with military families living in cities all around our nation, many military children are being taught by special teachers in classrooms nationwide.

Joelle Zarcone is Public Affairs Specialist for the Office of the Assistant Secretary of Defense for Public Affairs, and editor of OurMilitary.mil.