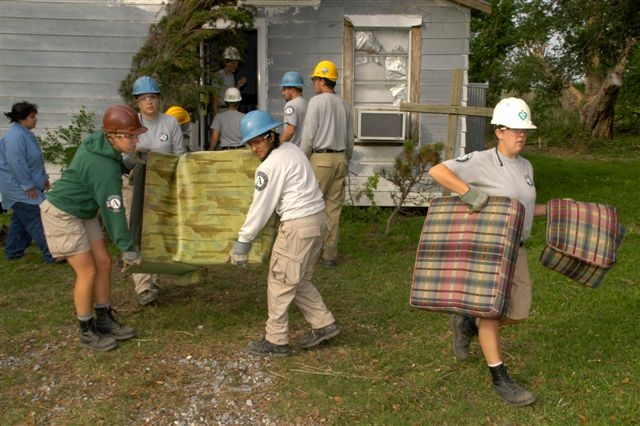 Volunteers help gut homes, aiding in recovery efforts from recent storms. May 4, 2011. (by Corporation for National and Community Service)

Over the past few weeks, a series of devastating tornadoes swept across the country.  From Mississippi to Virginia, communities are suffering great losses.  The Corporation for National and Community Service’s (CNCS) Disaster Services Unit rapidly mobilized thousands of volunteers to assist local recovery efforts.

For Kelly DeGraff, the Senior Advisor for Disaster Services at CNCS, the agency's response to the tornadoes in Mississippi was particularly poignant.  In less than 24 hours after the tornado struck Jackson, MS, CNCS volunteers were on the ground serving affected residents.  A team of six NCCC members from the Southern Region campus in Vicksburg, MS helped to feed residents and distribute supplies.  For nearly a week, team Leader Moses Moua, 23, of Orlando, FL and Corps Member Michael Brown, 20, of Indianapolis, IN provided day and night staffing at the American Red Cross shelter in Clinton, MS.

While working in the shelter, Moua and Brown spent time with Frelicia May and her family of sixteen.  May, her husband, sister, children and grandchildren were painfully familiar with being in a shelter following a storm.  After losing everything during Hurricane Katrina, they had drifted to several places in Louisiana and Texas before settling near her family in Jackson, MS.  On April 15, when the tornado struck May’s new home, she gathered the few things she could salvage and headed to her sister’s two-bedroom apartment.  They quickly realized that the cramped apartment would not provide the large family sufficient space or resources to get back on their feet.

The May family took refuge in the American Red Cross shelter where Moua and Brown welcomed them.  After a few days at the shelter, May spoke affectionately of the NCCC members – “We love them.  They laugh and talk to us and treat us like family.  Michael is really good with the kids.”  In addition to providing the families with basic needs, Brown has been playing tic-tac-toe, basketball, coloring, and reading to the 13 children.

“I can do a lot of things that I couldn’t do before, like build things.  I knew exactly what to do when I got to this shelter because we had training on it,” said Brown.  He said that being an NCCC volunteer has taught him a lot of skills and given him training that he didn’t know he would utilize.  It has also taught him the power of giving back.

Throughout the year, CNCS engages more than 1.5 million Americans of all ages and backgrounds in service.  Senior Corps, AmeriCorps State and National, and the AmeriCorps NCCC volunteers have been particularly active in responding to the recent disasters.  These programs play an essential role assisting communities responding to a disaster.  CNCS volunteer programs provide a great deal of value both to the communities in which they serve and the volunteers themselves.