May 5, 2011 at 2:14 PM ET by Ben Siegel
Twitter Facebook Email
Summary:
U.S. Interagency Council on Homelessness (USICH) held a meeting focusing on the important role of partnerships in combating and preventing homelessness. 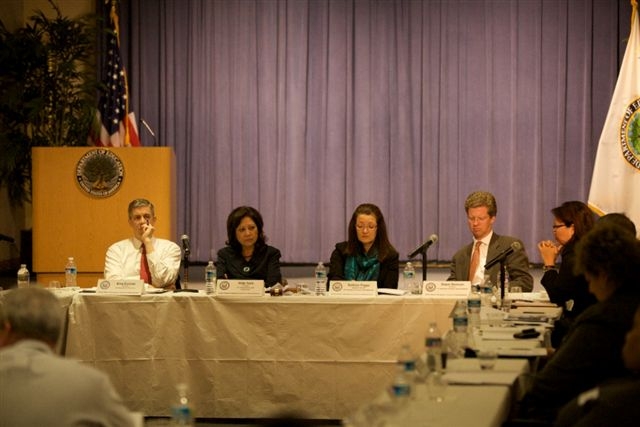 Recently, Labor Secretary Hilda Solis led her first meeting as chair of the U.S. Interagency Council on Homelessness (USICH). The meeting was hosted by Education Secretary Arne Duncan who was also joined by Housing and Urban Development Secretary Shaun Donovan, Social Security Administration Commissioner Michael Astrue and representatives from 14 other federal agencies. The major theme of the meeting was the important role of partnerships in combating and preventing homelessness.

Two bipartisan panels of state and city elected officials joined the meeting via teleconference and engaged in a conversation with Council members around work on the homelessness front in their states and cities. In both panels, faith-based organizations were prominently mentioned as central partners in the fight against homelessness.

The state panel featured Mayor John Hickenlooper of Colorado, Lt.  Governor Gavin Newsom of California, and Lt. Governor Greg Bell of Utah. Governor Hickenlooper spoke to his successes as mayor of Denver in bringing together more than 300 faith-based organizations and aligning strategies with foundations to launch his Denver Road Home initiative which he is now looking to replicate statewide. Lt. Governor Newsom highlighted a project he started as mayor of San Francisco called Project Homeless Connect, which brings together 1,000 community volunteers with government agencies, nonprofits, and the private sector every two months to provide a one-stop shop of health and human services for homeless San Franciscans. Newsom is also looking to scale this model statewide. Finally, Lt. Governor Bell discussed the importance of leadership in his state’s commitment to end chronic homelessness by 2014. Utah’s Homeless Coordinating Committee helps to sustain this leadership and Bell specifically acknowledged the extremely important role of faith-based organizations on the committee.

The city panel featured Mayor Michael Coleman of Columbus, OH and Mayor Ashley Swearengin of Fresno, CA. Both mayors talked about their efforts in engaging the public to address homelessness. In Columbus, Mayor Coleman has sought feedback and buy-in from nonprofit organizations. In Fresno, Mayor Swearengin has implemented an innovative model for engaging the public in supporting the work of nonprofits. The public can donate $1 per month for a year by texting the word HOME to 85944.

All in all, it was a spectacular meeting and a testament to the value of the faith community in serving our country’s most needy. Stay tuned for future updates on the work of USICH and partnerships at the federal, state, and local levels.

Please send us your comments and thoughts about this post.