May 9, 2011 at 11:13 AM ET by Max Finberg
Twitter Facebook Email
Summary:
Max Finberg, Director of the Center for Faith-based and Neighborhood Partnerships at the U.S. Department of Agriculture, describes the Department's "Food and Justice Passover Seder."

Matzah, the traditional flatbread eaten by Jewish people to commemorate Passover, decorated six circular tables, along with bitter herbs (maror), “mortar” for bricks (haroset), and green leafy vegetables (carpas).  Around the tables, USDA employees, Administration officials, and a host of guests from the non-profit and Jewish community gathered to celebrate the U.S. Department of Agriculture’s Food and Justice Passover Seder.

A traditional seder is a ceremonial Jewish meal commemorating the Passover holiday and Exodus of the Israelites from Egypt after being freed from slavery.  Held in partnership with Jewish Funds for Justice and the Progressive Jewish Alliance, USDA’s modernized symbolic seder was held after Passover and focused on issues where food and justice intersect.

Agriculture Secretary Tom Vilsack opened the evening by reflecting on what Passover has meant to him and said, “This evening is an opportunity for reflection on the blessings in our lives and the importance of what we do.” 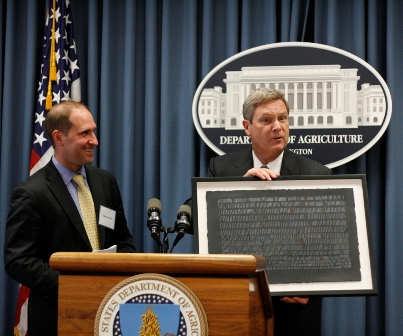 Secretary Vilsack receives an “Omer Counter” piece of artwork on behalf of the Department of Agriculture. April 28, 2011. (by Cory Fischer, USDA)

Rabbis Jack Moline of Virginia and Dara Frimmer of California led the program, which focused on four themes.  During the first part of the seder, the focus was hunger and food access.  It asked participants to think about and discuss hunger in the United States and abroad, and that many of our neighbors lack access to healthy, affordable food.  The second part of the seder looked at the labor conditions for farm workers, and asked participants to think about all of the people involved in getting food from the field to their fork and injustices within those systems.  The third segment focused on sustainable production and consumption and highlighted USDA’s Know Your Farmer Know Your Food Initiative and other efforts to strengthen connections between farmers and consumers.

The fourth theme of the evening was individual and communal responsibilities.  Here participants stood and shared what they could do in their own lives to advance food justice.  After each person rose to share their commitments, the room echoed with the traditional “Dayenu,” meaning “it would have been enough.”  Rabbi Moline shared that while each of these individual commitments will not be enough alone, to solve the challenges of food and justice, together they represented a strong starting place for going forward.  Each participant left wanting to do their part to repair the world for hungry and vulnerable people.

Max Finberg serves as Director of the Center for Faith-based and Neighborhood Partnerships at the U.S. Department of Agriculture.