May 12, 2011 at 10:33 AM ET by Secretary Shaun Donovan, Secretary Ray LaHood and Administrator Lisa Jackson
Twitter Facebook Email
Summary:
The Partnership for Sustainable Communities describes how this administration has been committed to strengthening local communities and helping them realize their own visions for economic opportunity, prosperity, and competitiveness.

From the moment President Obama took office, this administration has been committed to strengthening local communities and helping them realize their own visions for economic opportunity, prosperity, and competitiveness.

In the midst of the worst recession since the Great Depression, we worked together to help state, county, and municipal officials improve delivery of critical services to citizens.

And today, as families struggle with soaring gas prices, the President is taking a number of significant steps: ensuring that affordable housing is closer to public transportation, jobs and services; that vehicles are more fuel-efficient; and that people have the option to reach their destination without a car.

With the economy recovering--generating private sector job growth for 15 straight months--county administrators from across the nation were at the White House last week to discuss how the Federal government can partner with our nation’s counties to continue making our communities and metro regions more economically competitive.

Of course, this conversation has been going on for nearly two and a half years.  At the same time the Recovery Act was helping those communities harmed most by the economic crisis, President Obama asked the three of us to work together to ensure we get the biggest bang for the buck from federal investments in affordable, green housing, environmental safeguards, and transportation for families across the country--all critical elements of a stronger foundation for our economy.

The President recognized that, with the average household spending 52 cents out of every dollar on housing and transportation combined, and with the cost of moving products on our roads five times what it was 25 years ago, these kinds of innovations are absolutely critical to winning the future.

Since we started the Partnership for Sustainable Communities, we’ve helped integrate housing with transportation, neighboring retail, and business development; cleaned contaminated properties on main streets and near transit, returning them to productive use; and improved bus service in transit-dependent neighborhoods.

In 2009, Dubuque, Iowa, was redeveloping its historic Millwork District, an area that had been dormant since the early part of the 20th century.  IBM immediately saw this investment as creating just the kind of environment that today’s talented professionals want.  And they wanted to be a part of it, too.  That’s where our partnership came in.  Using reclaimed contaminated properties, green building techniques for mixed use development, and a rebuilt street network, we helped give an old river town a new beginning, and IBM added 1,300 local jobs. 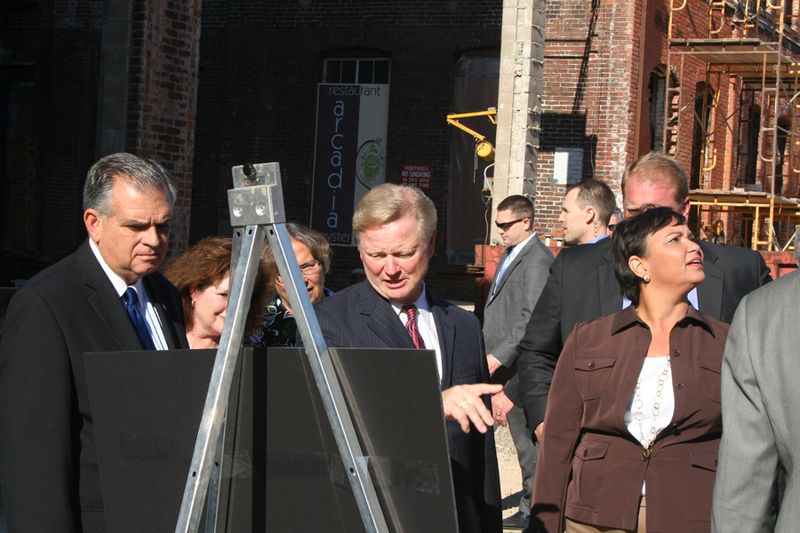 The work of our partnership in Dubuque is a model for coordinating federal and local investment to create jobs, promote sustainable development, and revitalize communities.  Because we began breaking down the barriers dividing our agencies, it became much easier for us to partner with local officials.  And it became much easier to focus our resources on the projects that make the biggest difference in peoples’ lives.

Through it all, the driving force behind changing the way we plan our communities hasn’t been Washington, but local leaders like the county administrators who visited the White House last week.  They recognize that real fiscal responsibility is finding ways to solve several problems with a single investment.

It’s about working together to deliver results for the people and places that depend on us most.