May 16, 2011 at 2:57 PM ET by Jesse Lee
Twitter Facebook Email
Summary:
The President gives the commencement address at Booker T. Washington High School in Memphis, chosen as a finalist for the Race to the Top Commencement Challenge on the basis of its inspiring turn-around story, and voted the winner by the public.

UPDATE: Also watch video of the President surprising some of the students ahead of the speech, or watch the President's full remarks here.

"Every commencement is a day of celebration," said the President at the commencement for Booker T. Washington High School in Memphis, "But this one is especially hopeful."  BTW, as the school is known, was the winner of the Race to the Top Commencement Challenge, chosen as a finalist on the basis of its inspiring turn-around story and voted the winner by the public after each finalist school submitted a video making its case.  The President continued:

This one is especially hopeful because some people say that schools like BTW just aren’t supposed to succeed in America.  You’ll hear them say, “The streets are too rough in those neighborhoods.”  “The schools are too broken.” “The kids don’t stand a chance.”

Supporting these kinds of turnarounds has been a focus of the President’s education policies, from the national Race to the Top contest where states competed to show real reform plans, to School Improvement Grants that demand uprooting entrenched problems, the President has insisted that funding go to states, communities and schools who have refused to give up, and shown their commitment to change so that their kids would be prepared for the competitive world that awaits them after graduation. 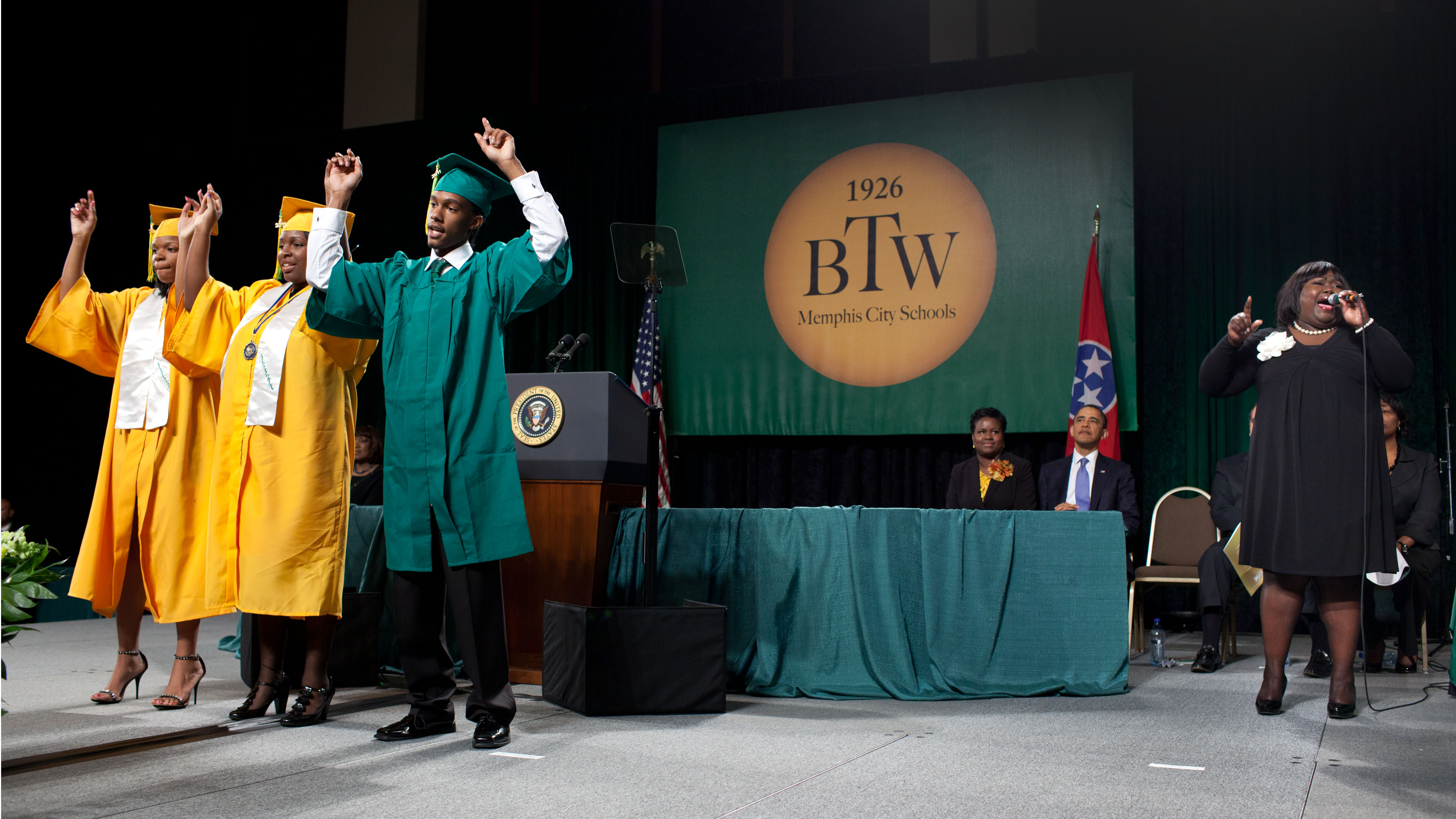 President Barack Obama sits with Principal Alisha Kiner as they watch a performance at the Booker T. Washington High School commencement ceremony at Cook Convention Center in Memphis, Tenn., May 16, 2011. The high school was the winner of the 2011 Race To The Top Commencement Challenge. (Official White House Photo by Pete Souza)

Speaking at BTW, where graduation rates went from 55% in 2007 to 81.6% in 2010, the President was clearly inspired to see the faces that represent that kind of change.  And as he said, his passion for education is based on his own experience not only as a father, but as a child growing up years ago.  He spoke to the graduates on a personal level about the lessons he learned.

On support from our teachers and families:

And understand, this isn’t just an issue for me.  I’m standing here as President because of the education that I received.  As Chris said, my father left my family when I was two years old.  And I was raised by a single mom, and sometimes she struggled to provide for me and my sister.  But my mother, my grandparents, they pushed me to excel.  They refused to let me make excuses.  And they kept pushing me, especially on those rare occasions where I’d slack off or get into trouble.  They weren’t that rare, actually.  (Laughter.)  I’m sure nobody here has done anything like that.   (Laughter.)

I’m so blessed that they kept pushing; I’m so lucky that my teachers kept pushing -- because education made all the difference in my life.  The same is true for Michelle.  Education made such a difference in her life.  Michelle’s dad was a city worker, had multiple sclerosis, had to wake up every day and it took him a couple hours just to get ready for work.  But he went to work every day.  Her mom was a secretary, went to work every day, and kept on pushing her just like my folks pushed me.

The President also explained how through education we “learn how to learn,” so that we can learn how to think through real life problems, and gives us substance in a world filled with distractions:

Education also teaches you the value of discipline -- that the greatest rewards come not from instant gratification but from sustained effort and from hard work.  This is a lesson that’s especially true today, in a culture that prizes flash over substance, that tells us that the goal in life is to be entertained, that says you can be famous just for being famous.  You get on a reality show -- don't know what you’ve done -- suddenly you’re famous.  But that's not going to lead to lasting, sustained achievement.

And finally, with the right education, both at home and at school, you can learn how to be a better human being.  For when you read a great story or you learn about an important moment in history, it helps you imagine what it would be like to walk in somebody else’s shoes, to know their struggles.  The success of our economy will depend on your skills, but the success of our community will depend on your ability to follow the Golden Rule -- to treat others as you would like to be treated.

We’ve seen how important this is even in the past few weeks, as communities here in Memphis and all across the South have come together to deal with floodwaters, and to help each other in the aftermath of terrible tornadoes.