From Data to Apps: Putting Government Information to Work for You

When the Department of Defense in the 1990s released GPS data, originally developed for military use, to the public, it sparked an explosion of innovation that gave rise to tools we now use in our everyday lives – from helping us find our way in an unfamiliar city to assisting first responders save lives. But why stop there? 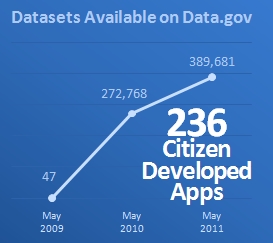 On May 21, 2009, we launched Data.gov to democratize data across the government and tap into the ingenuity of the public to develop tools that help the American people.  47 datasets were available on day one. I’m pleased to announce that two years later, Data.gov hosts 389,681 datasets covering every aspect of government operations, from health care data to public safety information. As events break across the globe, Data.gov helps puts the resources of the United States government at the fingertips of the world – most recently, providing real-time alerts and data related to the earthquakes off the coast of Japan and radiation levels in the United States.

Innovators from across the country have been busy putting these datasets to work. So far, hundreds of apps have been created that include helping parents keep their children safe, assisting travelers find the fastest route to their destinations, and informing home buyers about the safety of their new neighborhood.

This emerging “app economy” not only gives rise to innovative applications, it also helps us crack down on wasteful and redundant government spending. For too long, the government has relied on armies of consultants, a fragmented infrastructure, and customized, one-off applications, spending billions of dollars to share information within government and with citizens. By mobilizing citizen-developers and leveraging the Data.gov platform, we can do more for less.

And Data.gov has spawned a global movement – 16 nations, 29 states, 11 cities and several international organizations have established open data platforms. In the coming months and years, we will see an explosion of apps based on the Data.gov platform which will disrupt our current thinking of how we procure technology solutions and how we deliver services to citizens.