May 20, 2011 at 4:03 PM ET by Jesse Lee
Twitter Facebook Email
Summary:
A day after the President’s speech on the Middle East and North Africa, where he spoke on the changes sweeping the region as well as the ongoing conflict between Israelis and Palestinians, the President hosted Prime Minister Netanyahu of Israel for a lengthy meeting.

A day after the President’s speech on the Middle East and North Africa, where he spoke on the changes sweeping the region as well as the ongoing conflict between Israelis and Palestinians, the President hosted Prime Minister Netanyahu of Israel for a lengthy meeting.  Afterwards they both spoke to the press in the Oval Office, and the President described their discussion as focusing on the same themes as his speech, including support for reforms in countries throughout the region:

Well, let me, first of all, welcome again Prime Minister Netanyahu, who I think has now been here seven times during the course of my presidency.  And I want to indicate that the frequency of these meetings is an indication of the extraordinary bonds between our two countries, as is the opportunity for the Prime Minister to address Congress during his visit here.  I know that’s an honor that’s reserved for those who have always shown themselves to be a great friend of the United States and is indicative of the friendship between our countries.

We just completed a prolonged and extremely useful conversation touching on a wide range of issues.  We discussed, first of all, the changes that are sweeping the region and what has been happening in places like Egypt and Syria and how they affect the interests and security of the United States and Israel, as well as the opportunity for prosperity, growth and development in the Arab world.

We agreed that there is a moment of opportunity that can be seized as a consequence of the Arab Spring, but also acknowledge that there’s significant perils as well, and that it’s going to be important for the United States and Israel to consult closely as we see developments unfold. 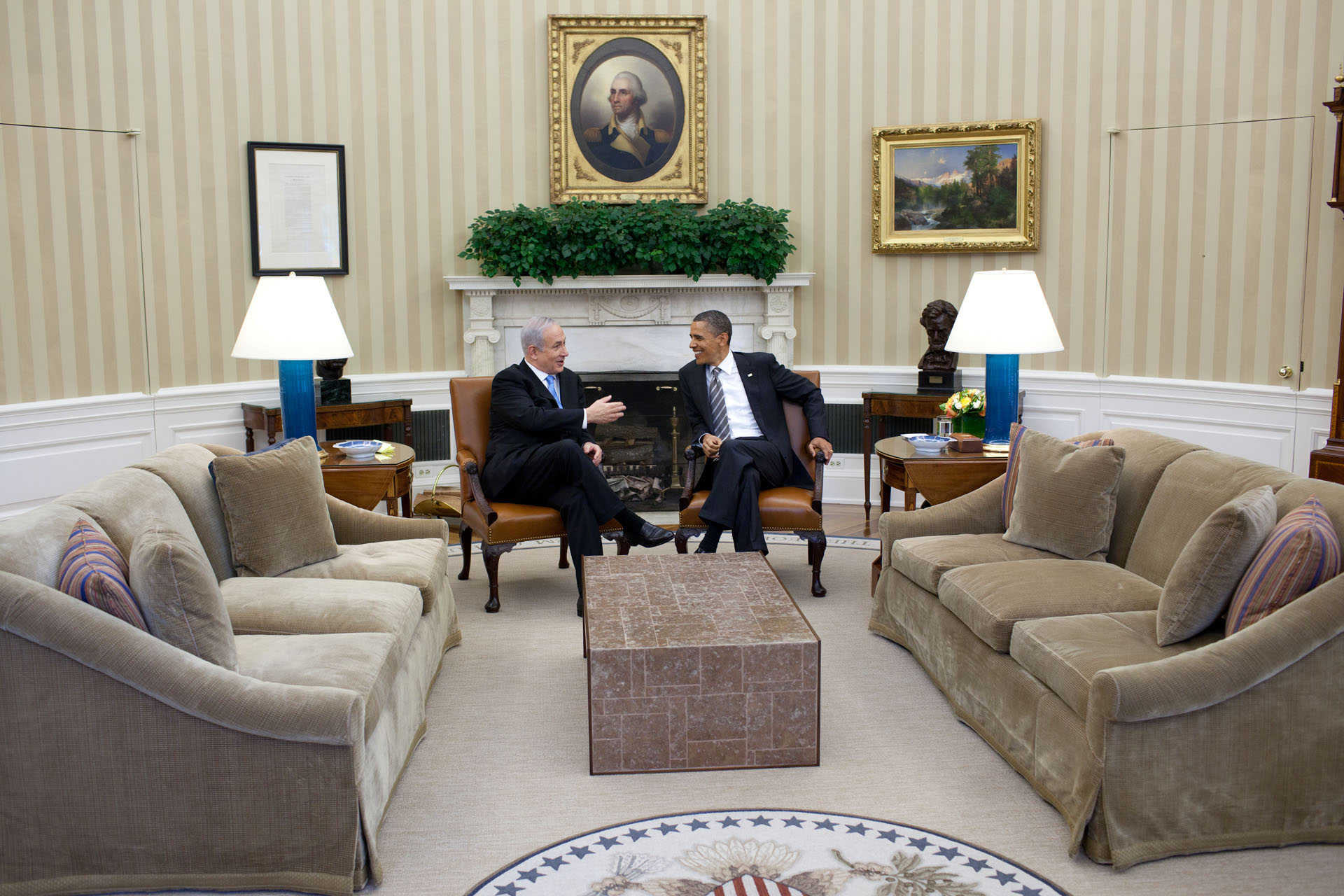 President Barack Obama meets with Prime Minister Benjamin Netanyahu of Israel, in the Oval Office, May 20, 2011. (by Pete Souza)

The President also spoke at some length about their discussion of the peace process:

Finally, we discussed the issue of a prospective peace between Israelis and Palestinians.  And I reiterated and we discussed in depth the principles that I laid out yesterday -- the belief that our ultimate goal has to be a secure Israeli state, a Jewish state, living side by side in peace and security with a contiguous, functioning and effective Palestinian state.

Obviously there are some differences between us in the precise formulations and language, and that’s going to happen between friends.  But what we are in complete accord about is that a true peace can only occur if the ultimate resolution allows Israel to defend itself against threats, and that Israel’s security will remain paramount in U.S. evaluations of any prospective peace deal.

I said that yesterday in the speech, and I continue to believe it.  And I think that it is possible for us to shape a deal that allows Israel to secure itself, not to be vulnerable, but also allows it to resolve what has obviously been a wrenching issue for both peoples for decades now.

I also pointed out, as I said in the speech yesterday, that it is very difficult for Israel to be expected to negotiate in a serious way with a party that refuses to acknowledge its right to exist.  And so for that reason I think the Palestinians are going to have to answer some very difficult questions about this agreement that’s been made between Fatah and Hamas.  Hamas has been and is an organization that has resorted to terror; that has refused to acknowledge Israel’s rights to exist.  It is not a partner for a significant, realistic peace process.  And so, as I said yesterday during the speech, the Palestinians are going to have to explain how they can credibly engage in serious peace negotiations in the absence of observing the Quartet principles that have been put forward previously.

So, overall, I thought this was an extremely constructive discussion.  And coming out of this discussion, I once again can reaffirm that the extraordinarily close relationship between the United States and Israel is sound and will continue, and that together, hopefully we are going to be able to work to usher in a new period of peace and prosperity in a region that is going to be going through some very profound transformations in the coming weeks, months and years.