President Obama Speaks to Our Intelligence Community: "I Put My Bet on You"

President Obama Speaks to Our Intelligence Community: "I Put My Bet on You"

May 20, 2011 at 5:54 PM ET by Jesse Lee
Twitter Facebook Email
Summary:
The President makes his third visit to CIA Headquarters in Langley, Virginia, this time to thank them for a job well done. 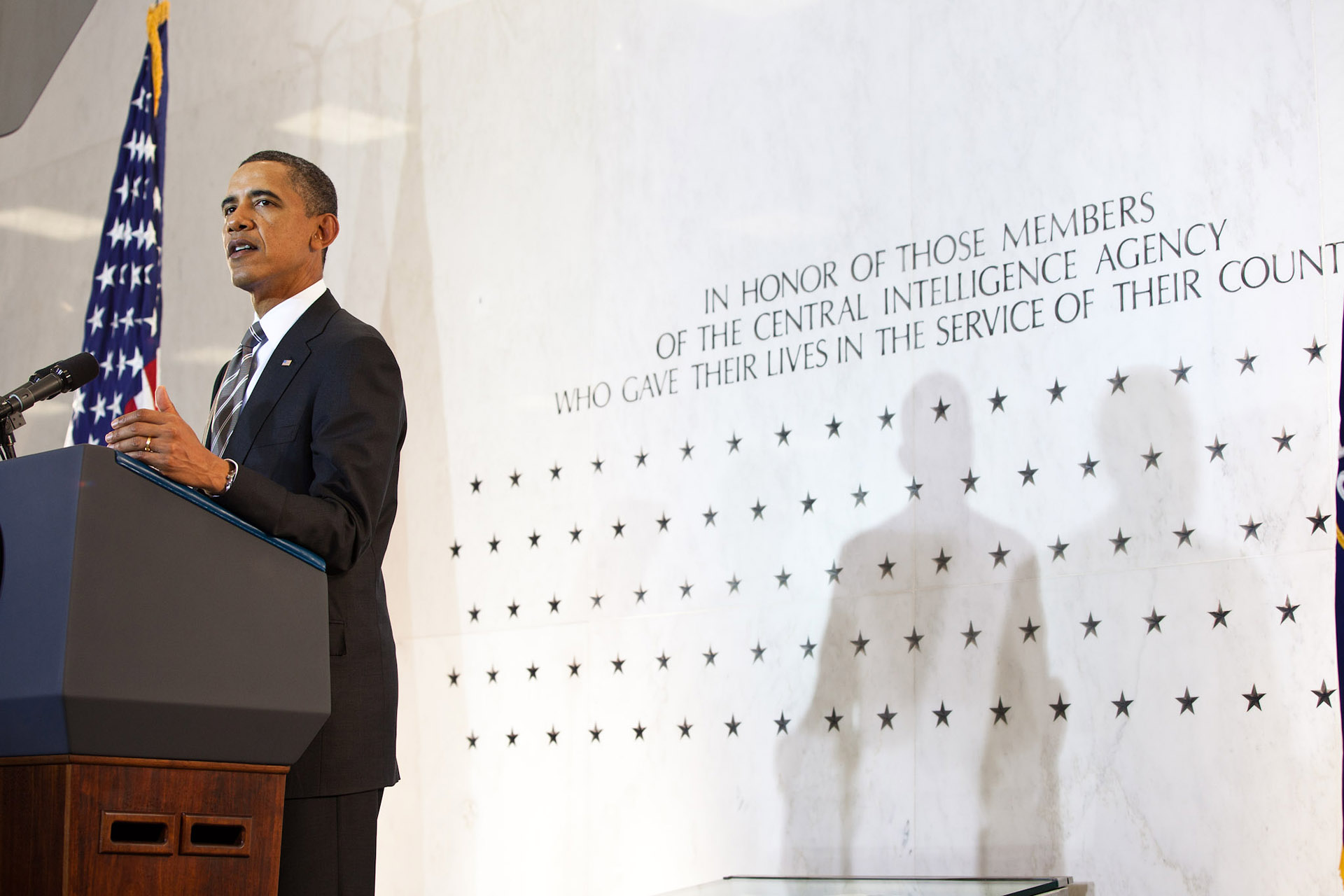 President Barack Obama delivers remarks to the intelligence community in the lobby of the Old CIA headquarters in Langley, Va., May 20, 2011. The backdrop is the CIA Wall of Stars. The President thanked intelligence community workers for the work they do every day and specifically for their excellent work in tracking down Osama bin Laden. (Official White House Photo by Pete Souza)

This afternoon, the President made the third visit of his term out to Langley, although there was a different feeling this time.  As Director of National Intelligence Jim Clapper put it, the death of bin Laden was not only a moment of some closure for families of the victimes of his attacks, it was a moment of some closure for the intelligence community.  But of course that community toils on without a break, going through the millions of pages of intelligence found there and hunting down threats around the world.  So standing beside DNI Clapper and CIA Director Panetta, the President thanked them for it:

That’s why I came here.  I wanted every single one of you to know, whether you work at the CIA or across the community, at every step of our effort to take out bin Laden, the work you did and the quality of the intelligence that you provided made the critical difference -- to me, to our team on those helicopters, to our nation.

After I directed that getting bin Laden be the priority, you hunkered down even more, building on years of painstaking work; pulling together, in some cases, the slenderest of intelligence streams, running those threads to ground until you found that courier and you tracked him to that compound.  And when I was briefed last summer, you had built the strongest intelligence case against -- in terms of where bin Laden was since Tora Bora.

In the months that followed, including all those meetings in the Situation Room, we did what sound intelligence demands:  We pushed for more collection.  We pushed for more evidence.  We questioned our assumptions.  You strengthened your analysis.  You didn’t bite your tongue and try to spin the ball, but you gave it to me straight each and every time.

And we did something really remarkable in Washington -- we kept it a secret.  (Laughter and applause.)  That’s how it should be.

Of course, when the time came to actually make the decision, we didn’t know for sure that bin Laden was there.  The evidence was circumstantial and the risks, especially to the lives of our special operations forces, were huge.  And I knew that the consequences of failure could be enormous.  But I made the decision that I did because I had absolute confidence in the skill of our military personnel and I had confidence in you.  I put my bet on you.  And now the whole world knows that that faith in you was justified.

So just as impressive as what you did was how you did it.  It was a tribute to your perseverance, your relentless focus and determination over many years.  For the fight against al Qaeda did not begin on 9/11.  Among you are veterans who’ve been pursuing these murderers for many years, even before they attacked our embassies in Africa and struck the Cole in Yemen.  Among you are young men and women for whom 9/11 was a call to service.  This fight has defined your generation.  And on this wall are stars honoring all your colleagues and friends, more than a dozen who have given their lives in the fight against al Qaeda and its violent allies.

As the years wore on, others began to think that this terrorist might never be brought to justice.  But you never quit.  You never gave up.  You pulled together across this agency and across the community.

No one piece of information and no one agency made this possible.  You did it together -- CIA, National Security Agency, National Reconnaissance Office, the National Geospatial Intelligence Agency, everyone at ODNI and the National Counterterrorism Center.  Folks across the country, civilian and military, so many of you here today.

And that’s exactly how our intelligence community is supposed to work, using every capability -- human, technical -- collecting, analyzing, sharing, integrating intelligence, and then acting on it.

That’s what made this one of the greatest intelligence successes in American history, and that’s why intelligence professionals are going to study and be inspired by your achievement for generations to come.