President Obama in Dublin: "Never Has a Nation So Small Inspired So Much in Another"

May 23, 2011 at 5:55 PM ET by Jesse Lee
Twitter Facebook Email
Summary:
The President embraces Ireland's heritage before a crowd of thousands in Dublin, Ireland. 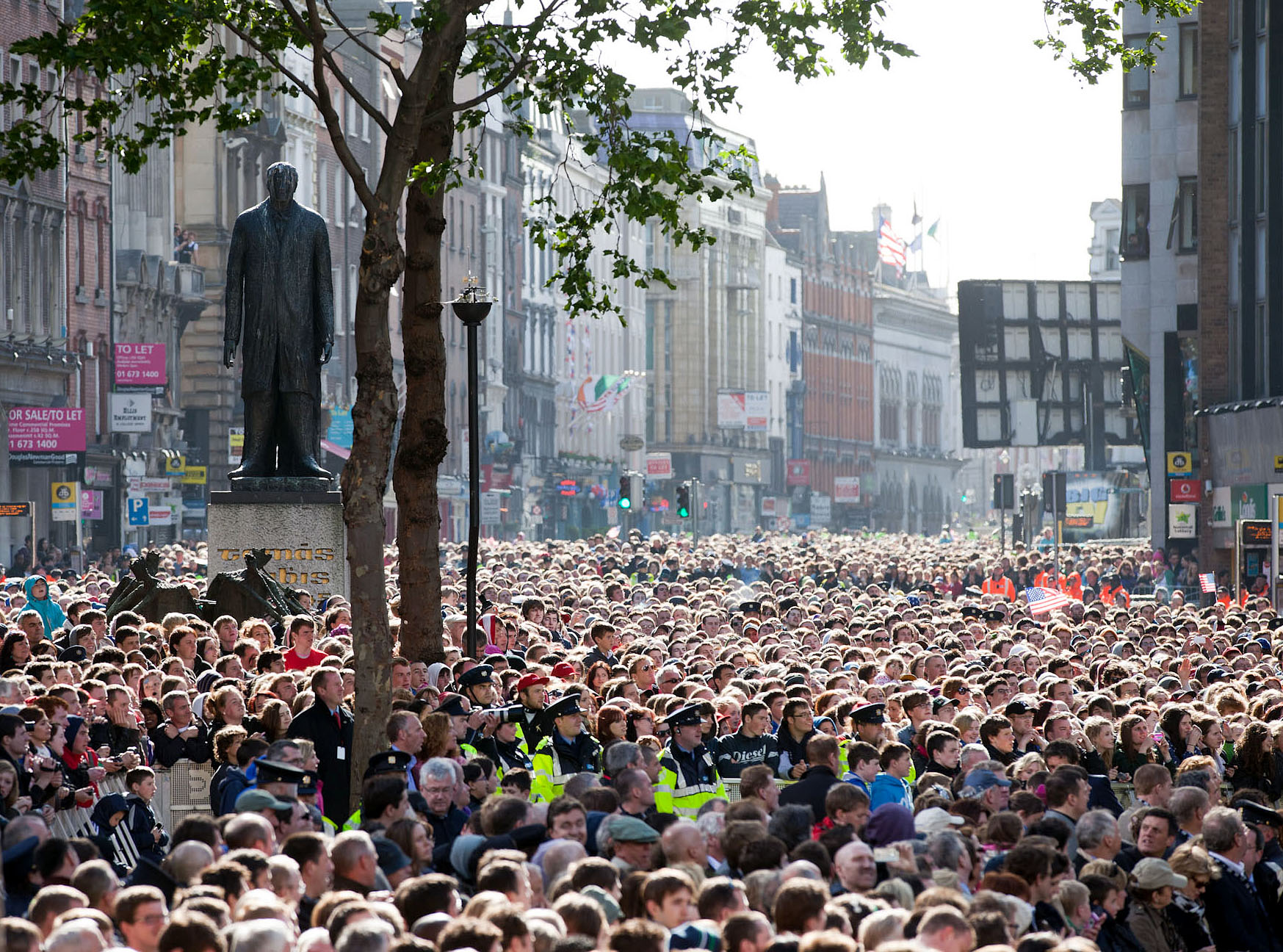 Given the enthusiasm of the crowd and the welcome at the President speech in Dublin today, it was understandable that the President so happily embraced his newly pin-pointed Irish heritage, small though it may be:

Now, I knew that I had some roots across the Atlantic, but until recently I could not unequivocally claim that I was one of those Irish Americans.  But now if you believe the Corrigan Brothers, there’s no one more Irish than me.

The President also obliged with a joke about coming home "to find the apostrophe that we lost somewhere along the way," but he spent the better part of his speech honoring the rich history and spirit of Ireland:

Earlier today Michelle and I visited Moneygall where we saw my ancestral home and dropped by the local pub.  (Applause.)  And we received a very warm welcome from all the people there, including my long-lost eighth cousin, Henry.  (Laughter.)  Henry now is affectionately known as Henry VIII.  (Laughter.)  And it was remarkable to see the small town where a young shoemaker named Falmouth Kearney, my great-great-great grandfather, my grandfather’s grandfather, lived his early life.  And I was the shown the records from the parish recording his birth.  And we saw the home where he lived.

And he left during the Great Hunger, as so many Irish did, to seek a new life in the New World.  He traveled by ship to New York, where he entered himself into the records as a laborer.  He married an American girl from Ohio.  They settled in the Midwest. They started a family.

It’s a familiar story because it’s one lived and cherished by Americans of all backgrounds.  It’s integral to our national identity.  It’s who we are, a nation of immigrants from all around the world.

But standing there in Moneygall, I couldn’t help but think how heartbreaking it must have been for that great-great-great grandfather of mine, and so many others, to part.  To watch Donegal coasts and Dingle cliffs recede.  To leave behind all they knew in hopes that something better lay over the horizon.

And as they worked and struggled and sacrificed and sometimes experienced great discrimination, to build that better life for the next generation, they passed on that faith to their children and to their children’s children -- an inheritance that their great-great-great grandchildren like me still carry with them.  We call it the America Dream.  (Applause.)

It’s the dream that Falmouth Kearney was attracted to when he went to America.  It’s the dream that drew my own father to America from a small village in Africa.  It’s a dream that we’ve carried forward -- sometimes through stormy waters, sometimes at great cost -- for more than two centuries.  And for my own sake, I’m grateful they made those journeys because if they hadn’t you’d be listening to somebody else speak right now.  (Laughter.)

And for America’s sake, we’re grateful so many others from this land took that chance, as well.  After all, never has a nation so small inspired so much in another.  (Applause.)

Irish signatures are on our founding documents.  Irish blood was spilled on our battlefields.  Irish sweat built our great cities.  Our spirit is eternally refreshed by Irish story and Irish song; our public life by the humor and heart and dedication of servants with names like Kennedy and Reagan, O’Neill and Moynihan.  So you could say there’s always been a little green behind the red, white and blue.  (Applause.) 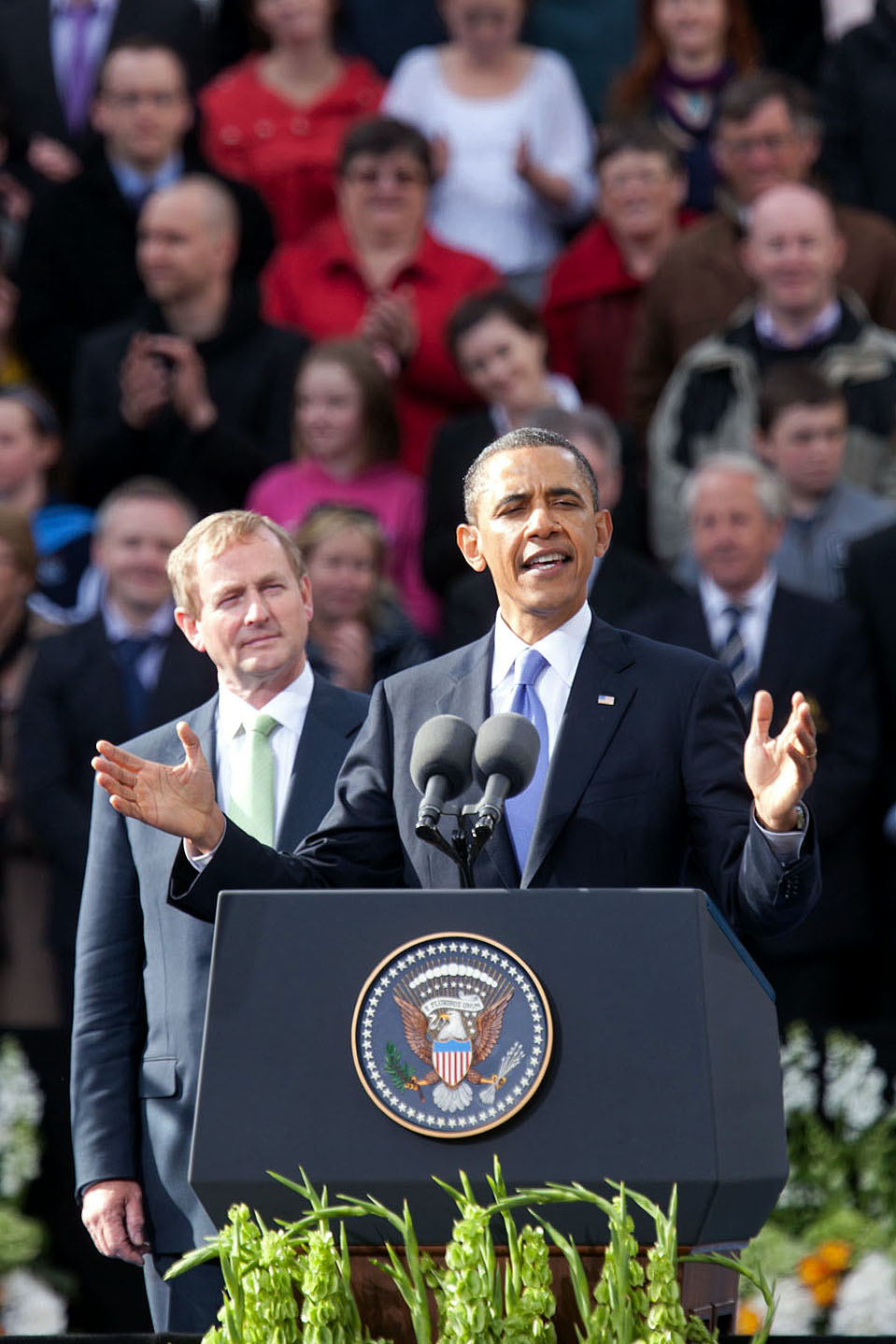 Of course that's only an excerpt, read the rest.  For just a little more color from the trip, the reception in Moneygall was just as enthusiastic, particularly when he did this: 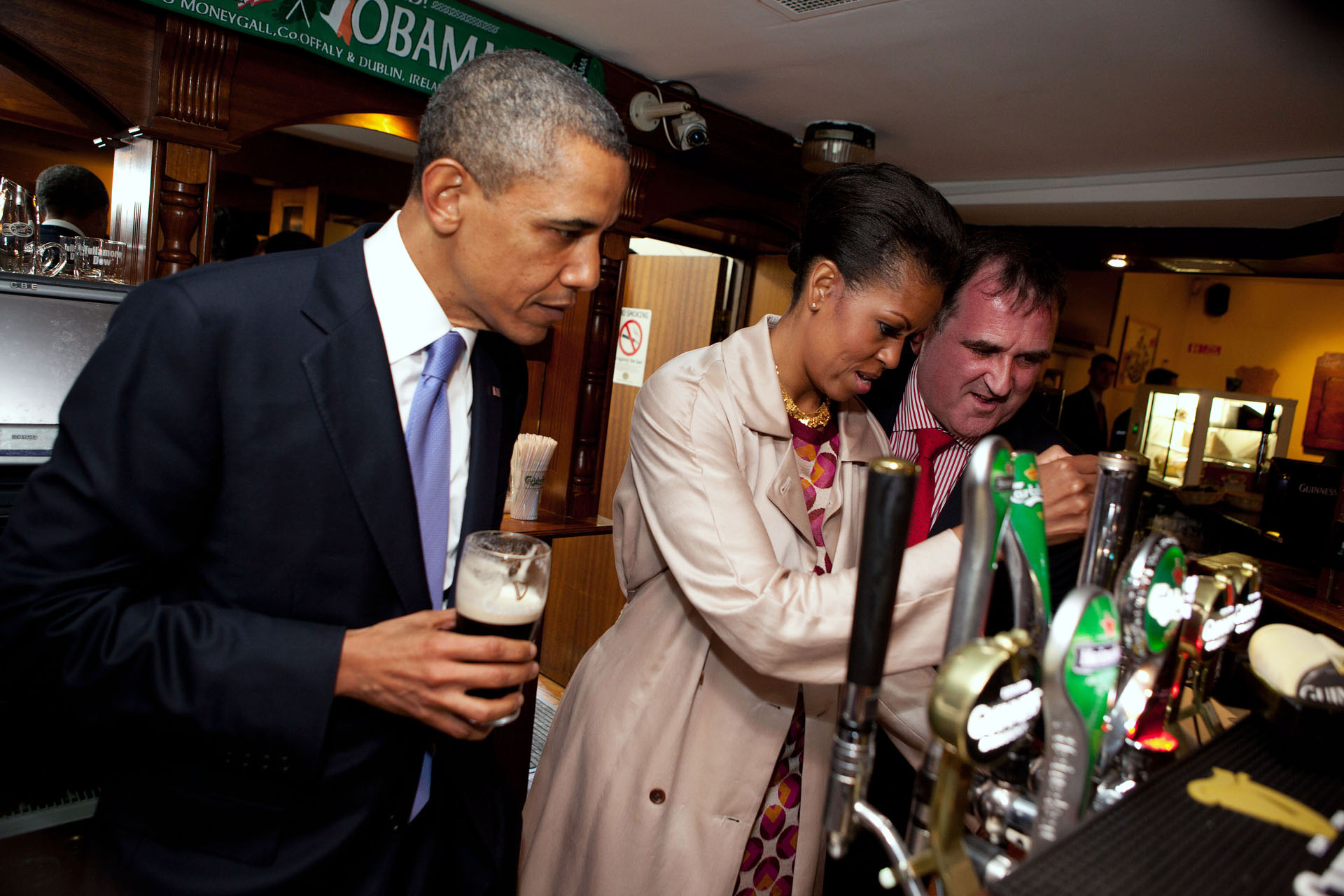