May 24, 2011 at 7:40 PM ET by Sahar Wali
Twitter Facebook Email
Summary:
Today, U.S. Department of Energy Secretary Steven Chu, U.S. General Services Administrator Martha Johnson and White House Council on Environmental Quality Chair Nancy Sutley came together to announce another major step in leading by example and reducing our dependence on oil by boosting clean energy technologies in our Federal fleet.
Update: The post below has been updated with a video on Tuesday's event, originally posted on the GSA YouTube Page. 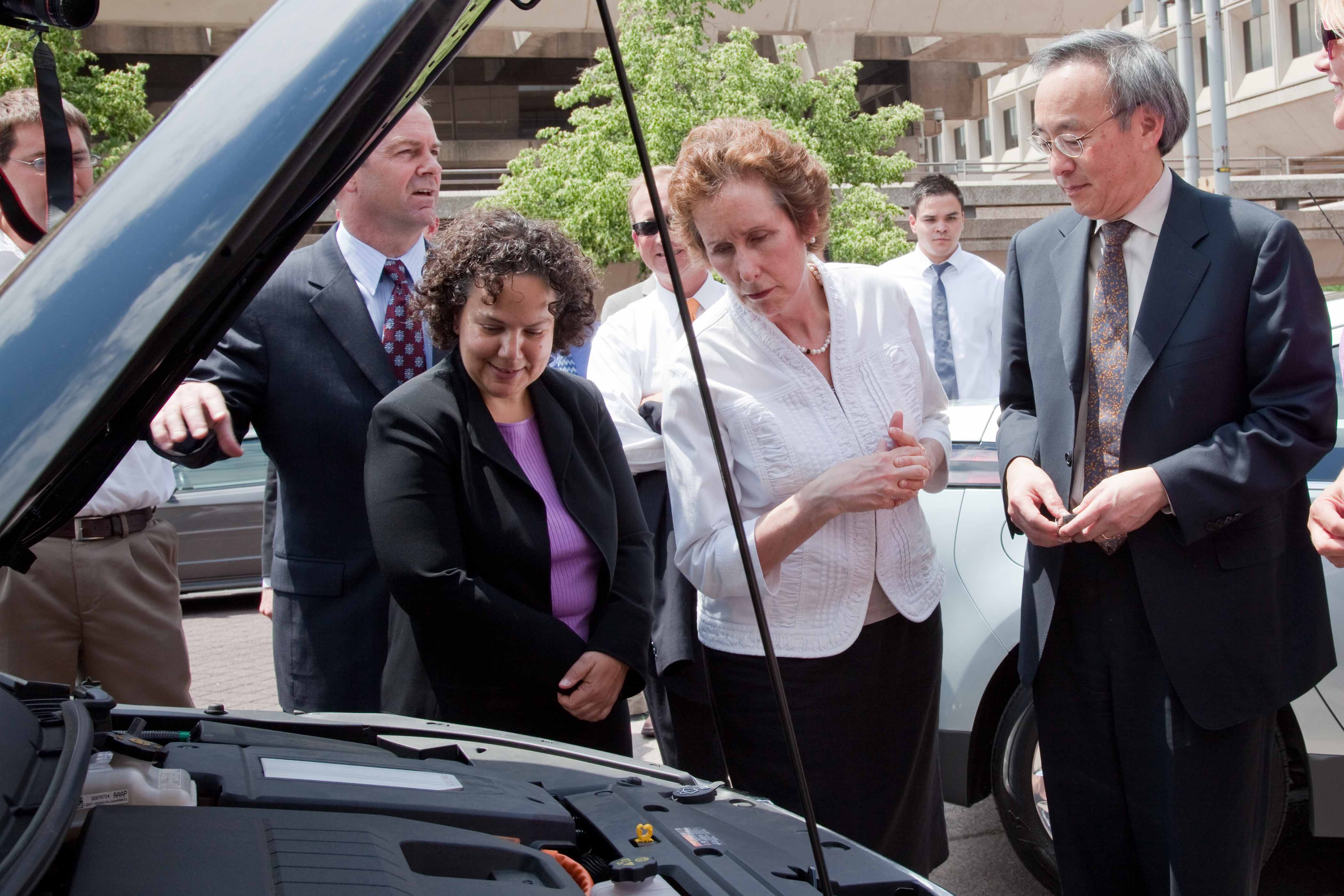 Today, U.S. Department of Energy Secretary Steven Chu, U.S. General Services Administrator Martha Johnson and White House Council on Environmental Quality Chair Nancy Sutley came together to announce another major step in leading by example and reducing our dependence on oil by boosting clean energy technologies in our Federal fleet.  President Obama today issued a Presidential Memorandum that will implement new Federal fleet management practices to further the Administration's goals to cut oil imports by one-third by 2025 and to put one million advanced vehicles on the road by 2015.  In tandem, building on the doubling of the Federal hybrid fleet last year, GSA launched a historic Electric Vehicle Pilot program that will put the President’s plan into action and place alternative fueled vehicles into cities across the country.

The response has already been overwhelmingly positive.  See some statements of support below from various business leaders, advocacy groups and Members of Congress:

Greg Martin, Director of Policy and Washington Communications, General Motors
"Electric vehicles represent a leap forward toward a more clean and secure America. The technology that powers electric vehicles is essential to building our Nation's long term, global competitive strength and lessening our dependence on foreign energy sources. The federal fleet provides a good proving ground for these advanced vehicles and can help spur greater market interest. In this regard, the GSA Pilot program is leading the way."

Joe Mendelson, Director of Policy, Climate & Energy Program, National Wildlife Federation
"Jump starting the electrification of our federal fleet is a great deal for taxpayers and the environment. It leads the way toward a future that avoids high prices at the gas pump, reduces carbon pollution, and invests in made-in-America technology."

Lizabeth Ardisana, Director of Sales, Service and Distribution, THINK
"Government involvement is critical to support and sustain the growing U.S. EV industry and direct government purchases of electric vehicles is the next logical step in supporting the policy to reduce America’s reliance on imported petroleum by one-third," said Lizabeth Ardisana, THINK Director of Sales, Service and Distribution. "Additionally, the loans and grants that manufacturers and local governments have received to support the commercialization of EV technology and related infrastructure have laid the groundwork to create a wealth of new job opportunities in the U.S."

"President Obama's memorandum and the General Services Administration's announcement on new government-wide fleet management practices is a welcome step in the right direction to cut those significant vehicle fuel costs and help strengthen the American economy. It also comes on the heels of the release of a recent Government Accountability Office report that detailed how federal agencies are struggling with some of the vehicle mandates that have been placed on them. Moving to alternative fuel vehicles will help us reach the President's goal of a 30 percent reduction in petroleum use by 2015. This action underscores the Obama Administration's willingness to lead the way in increasing energy efficiency, and it will also allow us to leverage the enormous buying power of the federal government to make these vehicles more affordable for every American family and business. I am also encouraged that as part of this effort, the President is asking agencies to figure out their optimal fleet size and composition. Given the enormous budget deficits we face, we need to take a harder look at every dollar we spend to determine that it is both essential and as cost-effective an expenditure as possible. My subcommittee plans on following up with agencies about their work to determine their fleet's size and cost in the coming months."

Mindy Lubber, President, Ceres
"Today's announcement to clean up the federal fleet and invest in our advanced vehicle industry isn't just smart government and environmental policy, it's good economic policy," said Mindy Lubber, President of the nationwide business and investor coalition Ceres. "America needs to lead in clean transportation. Government action like this shows that we can in fact achieve our clean energy goals, even as it primes the pump for key American industries to grab a competitive edge."

Roy Durham, Corp. /Govt. Fleet Director, RP Automotive
"RP Automotive is honored to be working with the GSA in their role to provide alternative fuel vehicles to the federal fleet in an effort to reduce both petroleum usage and harmful greenhouse gasses. We are proud to be a part of our government's plans to utilize zero and near-zero emission vehicles that will have measurable and positive effects for all of us."

"Just as importantly, the Electric Vehicle Pilot Program and related efforts will save Americans money in two different ways: By reducing the federal government’s fuel costs – a direct saving for taxpayers that promises to grow with the success of this program; and by reducing America’s oil demand, which is one of the chief drivers of climbing gasoline prices. SEEC commends the Obama Administration for its continued work to break the oil addiction that is so costly to Americans and jeopardizes our national security."