President Obama at Arlington National Cemetery: "Honor the Sacrifice of Those We've Lost"

May 30, 2011 at 3:00 PM ET by Nikki Sutton
Twitter Facebook Email
Summary:
President Obama presents a wreath at the Tomb of the Unknowns and participates in the Memorial Day Service at Arlington National Cemetery.

This Memorial Day, President Obama and First Lady Michelle Obama gathered in Arlington National Cemetery with military members, Gold Star families, veterans and other Americans who came to honor and remember those who gave the ultimate sacrifice for our country. After presenting a wreath at the Tomb of the Unknowns, the President spoke at the Memorial Day Service:

To those of you who mourn the loss of a loved one today, my heart goes out to you.  I love my daughters more than anything in the world, and I cannot imagine losing them.  I can’t imagine losing a sister or brother or parent at war.  The grief so many of you carry in your hearts is a grief I cannot fully know.

This day is about you, and the fallen heroes that you loved.  And it’s a day that has meaning for all Americans, including me.  It’s one of my highest honors, it is my most solemn responsibility as President, to serve as Commander-in-Chief of one of the finest fighting forces the world has ever known.  (Applause.)  And it’s a responsibility that carries a special weight on this day; that carries a special weight each time I meet with our Gold Star families and I see the pride in their eyes, but also the tears of pain that will never fully go away; each time I sit down at my desk and sign a condolence letter to the family of the fallen. 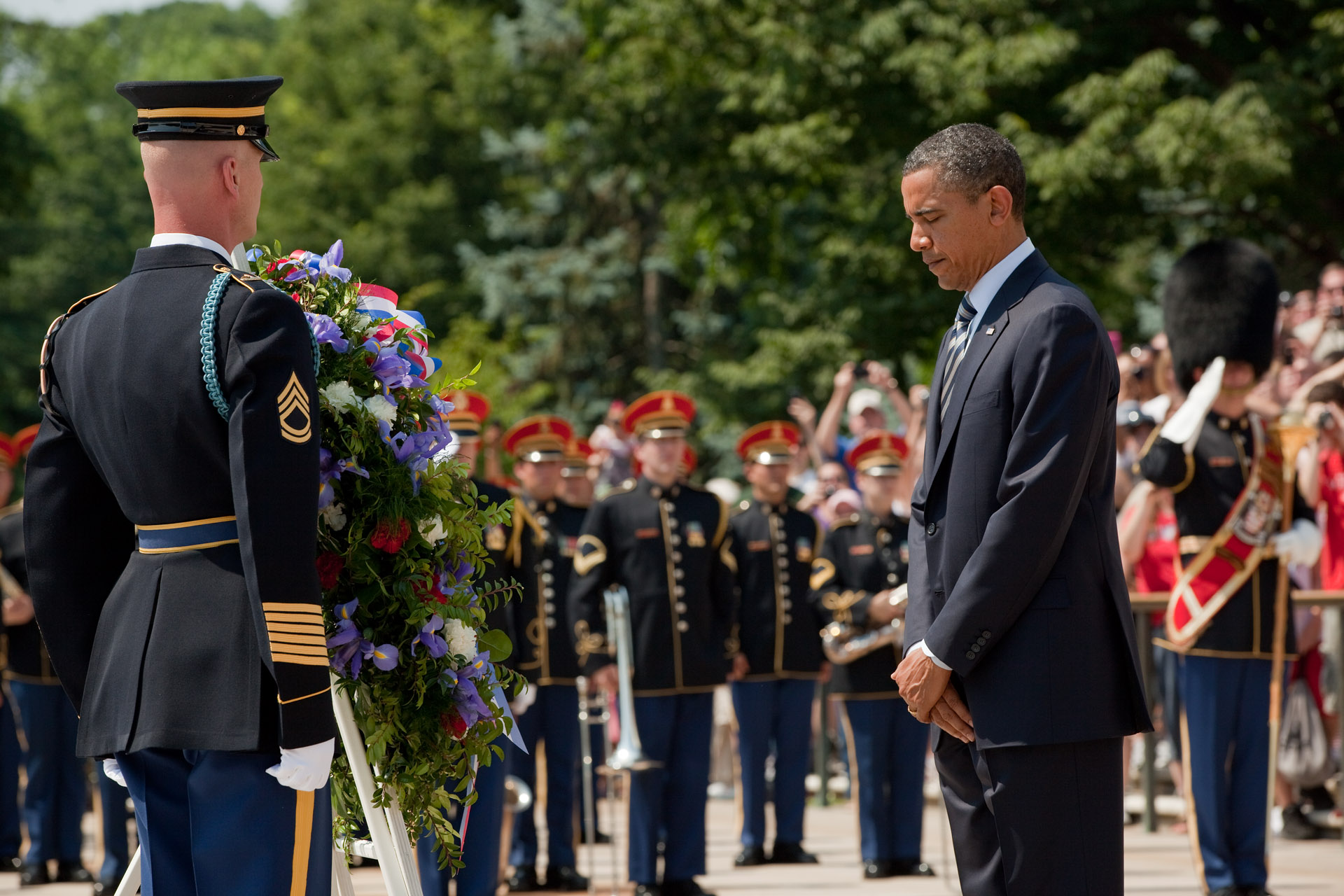 President Barack Obama pauses after placing a wreath at the Tomb of the Unknown Soldier in Arlington National Cemetery in Arlington, Va., May 30, 2011. (Official White House Photo by Pete Souza)

The President also spoke of how we can honor the sacrifice of those we've lost and shared the story of friends, 1st Lieutenant Travis Manion and Lieutenant Brendan Looney, who capture the meaning of Memorial Day:

Our nation owes a debt to its fallen heroes that we can never fully repay.  But we can honor their sacrifice, and we must.  We must honor it in our own lives by holding their memories close to our hearts, and heeding the example they set.  And we must honor it as a nation by keeping our sacred trust with all who wear America’s uniform, and the families who love them; by never giving up the search for those who’ve gone missing under our country’s flag or are held as prisoners of war; by serving our patriots as well as they serve us -- from the moment they enter the military, to the moment they leave it, to the moment they are laid to rest.

That is how we can honor the sacrifice of those we’ve lost.  That is our obligation to America’s guardians -- guardians like Travis Manion.  The son of a Marine, Travis aspired to follow in his father’s footsteps and was accepted by the USS [sic] Naval Academy.  His roommate at the Academy was Brendan Looney, a star athlete and born leader from a military family, just like Travis.  The two quickly became best friends -- like brothers, Brendan said.

After graduation, they deployed -- Travis to Iraq, and Brendan to Korea.  On April 29, 2007, while fighting to rescue his fellow Marines from danger, Travis was killed by a sniper.  Brendan did what he had to do -- he kept going.  He poured himself into his SEAL training, and dedicated it to the friend that he missed.  He married the woman he loved.  And, his tour in Korea behind him, he deployed to Afghanistan.  On September 21st of last year, Brendan gave his own life, along with eight others, in a helicopter crash.

Heartbroken, yet filled with pride, the Manions and the Looneys knew only one way to honor their sons’ friendship -- they moved Travis from his cemetery in Pennsylvania and buried them side by side here at Arlington.  “Warriors for freedom,” reads the epitaph written by Travis’s father, “brothers forever.”

The friendship between 1st Lieutenant Travis Manion and Lieutenant Brendan Looney reflects the meaning of Memorial Day.  Brotherhood.  Sacrifice.  Love of country.  And it is my fervent prayer that we may honor the memory of the fallen by living out those ideals every day of our lives, in the military and beyond.  May God bless the souls of the venerable warriors we’ve lost, and the country for which they died. 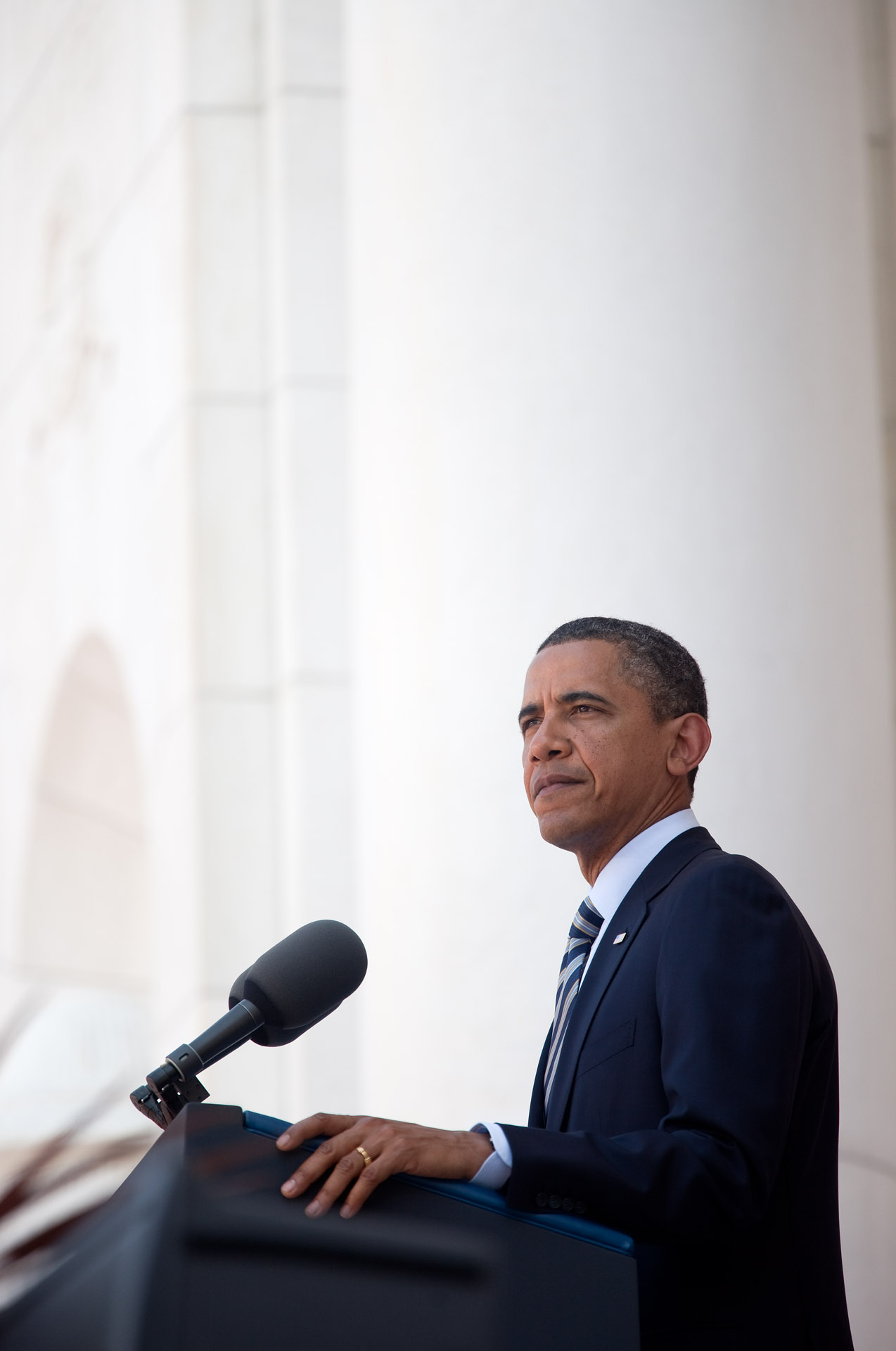