June 3, 2011 at 10:33 AM ET by Secretary Hilda Solis
Twitter Facebook Email
Summary:
Labor Secretary Hilda Solis visita Brideport High School, one of the finalists in the Presidents Commencement Challenge. Secretary Solis commended the school and its students for their efforts and achievements in the past year.

Ed. Note: Cross posted from the Department of Labor Blog. Bridgeport High School was one of three finalists in the President's Commencement Challenege. You can see their finalist video here.

Here, I proudly delivered the commencement speech at Bridgeport High School—one of three public schools chosen by President Obama as a finalist in the Race to the Top Commencement Challenge conceived to spur innovative reforms in our public schools. 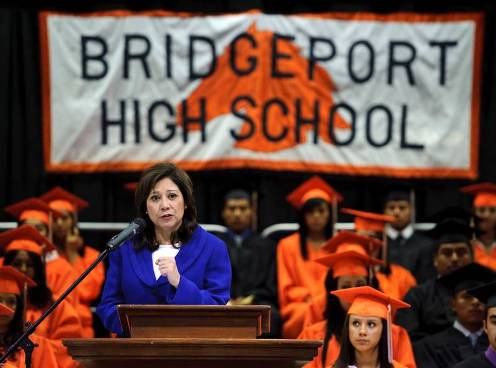 Secretary Solis delivers the commencement speech to students at Bridgeport High School. The school was one of three finalists in President Obama’s Race to the Top Commencement Challenge. June 3, 2011. (by (Photo by Department of Labor))

Perseverance is nothing new to Bridgeport. This town’s strong work ethic has been passed down through the generations. As far back as the late 1800s, Bridgeport was a destination for waves of hard-working immigrants who traveled here in search of opportunity and a better life.

On Wednesday, that beautiful tradition lived on in the 37 students who walked across the commencement stage. Despite long odds and humble means,every Bridgeport High School senior applied to college, and every student was accepted. Nearly all will become the first in their families to attend a university—and most became the first member of their families to get a high school diploma.

As President Obama has said, “Education is no longer just a pathway to opportunity and success, it is a prerequisite.”

As someone who sits in the President’s Cabinet room only because of the chances my education gave me, I couldn’t agree more. That’s why this administration has been focused on making sure that we build on the progress that’s taking place in schools like Bridgeport. We want to create real progress that’s inspired not by politicians, but by teachers, principals, parents and entire communities. 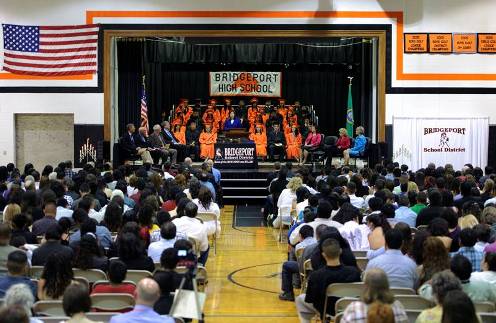 An enthusiastic crowd of family and friends filled the gym to witness the graduation ceremony. June 3, 2011. (by (Photo by Department of Labor))

Here is what I told the extraordinary class of 2011:

You’re role models now. And you’ll be leaders for years to come. You’re going to have to make a choice about whether we’ll say we can’t afford to educate people like you and send them to college, or whether we continue to make this country competitive in the 21st century.

Your siblings, your friends, and people you don’t even know are counting on you. But I have confidence that what you’ve learned here will steer you in the right direction.

But like your journey here, your next one isn’t always going to be easy, because life isn’t always easy. When you go out into the world, you won’t just be competing with people from Seattle, Washington or Portland. You’ll be competing against people from China and India.  They’re going to put up a pretty good fight and you all need to be prepared for it.

Some of you will go on to big colleges and universities in big cities, or go into the military to protect this country in places across the globe. And you’ll do it while this country and the world around you continues to change so fast.

There will be times when you feel like you have felt some days here. Like the underdog, like all the odds are stacked against you. And when that moment comes, you’ll think about Bridgeport.

As this country’s first Latina Labor Secretary — as someone who was told by others to aim low and think small — I have a message for you today: Keep going. Don’t let anyone or anything stand in your way. Your ‘Ganas’ [sheer force of will] is something that will get you far in life.

In two and a half years as U.S. Labor Secretary, I have seldom been more inspired than I was in Bridgeport, where a tight-knit community of farmworkers stood up to celebrate the remarkable achievements of its next generation.  They inspired a nation and proved that every young person, regardless of where they come from, can achieve the American Dream.