Earn While You Learn: 100 Years of Apprenticeship

Earn While You Learn: 100 Years of Apprenticeship

Ed. Note: Cross posted from the Department of Labor blog. 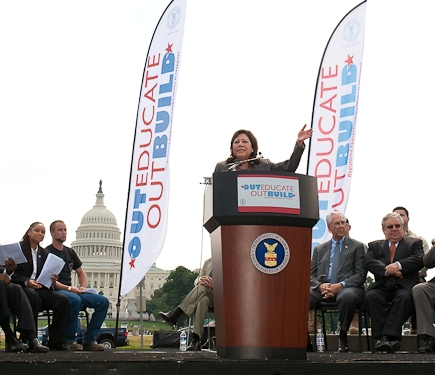 Secretary Solis with leaders from apprenticeship programs along with administration officials to commemorate 100 years of apprenticeship. June 6, 2011. (by Photo by Department of Labor)

This morning I had the honor of hosting an event on the National Mall to commemorate 100 Years of Registered Apprenticeship.

First established by Wisconsin state legislation in 1911, the United States Congress instituted federal registered apprenticeships in 1937 when it passed the Fitzgerald Act. The bill’s sponsor, Connecticut congressman William J. Fitzgerald, worked in a foundry as a young man.

The Fitzgerald Act protects the safety and welfare of apprentices and brings together employers and labor for the formulation of apprenticeship programs to train workers in specialized skills while earning a living wage.

Initially, Registered Apprenticeship programs existed mainly in the manufacturing, construction and utilities industries.  After World War II, Registered Apprenticeship began to expand into training of health and safety workers, including firefighters, police, and emergency medical technicians.  New generations are engaged in this unique ‘earn while you learn’ model in emerging industries such as information technology and health care, as well as culinary arts and child care.

Today as I commemorated this historic program, I was joined by inspiring young apprentices, including the Labor Department’s YouthBuild andJob Corps students, who are getting the skills they need to re-build this country – and their lives.  They demonstrate the necessity for registered apprenticeships now more than ever as we strive to get Americans back to work by providing job-seekers with the skills to land good-paying jobs, while linking employers with highly trained talent. 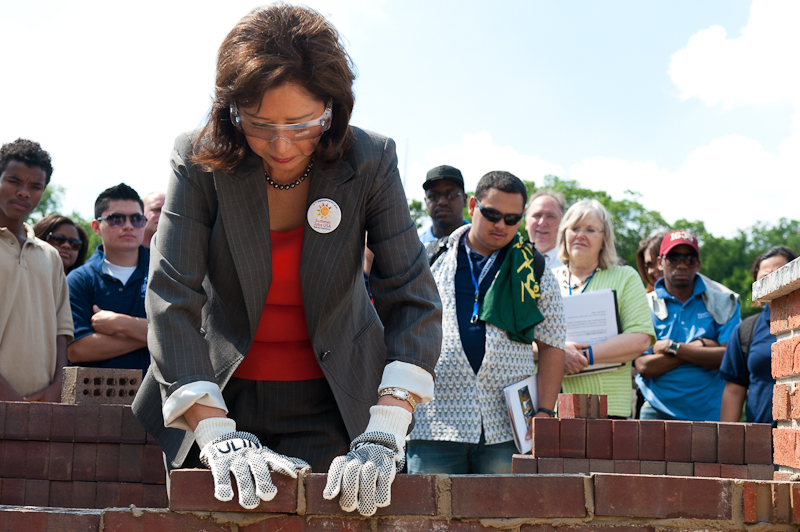 Secretary Solis at a brick laying apprenticeship booth on the National Mall. June 6, 2011. (by photo by the Department of Labor)

From the stage, Kevin Burton of the National Joint Apprenticeship and Training Committee moved me – and the gathered crowd — with the story of how apprenticeship brought her out of poverty and into the working class.

Ian Brady, a journeyman and United Association’s national apprentice of the year, shared with the YouthBuild and JobCorps participants present how he was able to earn a living while developing his trade through his apprenticeship.

I’ve said it before and I’ll say it again: joint apprenticeships are one of this country’s best kept secrets.  But from the National Mall this morning, I was proud to let the secret out.