June 6, 2011 at 6:42 PM ET by Elaine Sanchez
Twitter Facebook Email
Summary:
The First Lady speaks at the commencement ceremony of Quantico Middle/High School, honoring the graduating seniors from military families for their strength and compassion towards others.

Ed. Note: Cross posted from The Department of Defense News

First Lady Michelle Obama lauded the graduating seniors of Quantico Middle/High School here last night for their strength, resilience and maturity as they came of age in military families during a time of war.

"I think that all of you are incredibly special,” Obama told the class of 36 students, who greeted the first lady with a standing ovation and a resounding cheer at their commencement. 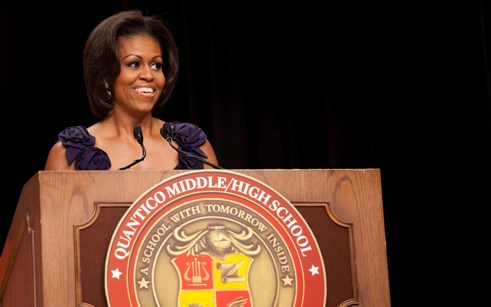 The class included nine students from Defense Department high schools in Japan who left with their families in the wake of the devastating earthquake and tsunami in March. Obama praised the students for so readily accepting the Japan-based students into their midst. But that show of kindness and compassion, and the strength and grace of the incoming students, doesn’t surprise her one bit, she added, as they’re qualities she’s seen in just about every military kid she’s met.

These qualities are hard won, but will serve them well throughout their lives, the first lady told the military teens. Growing up in military families, the seniors faced more challenges and had more experiences in their first 18 years than most people have in a lifetime, Obama said. They each moved, on average, more than six times, with one student tallying up a total of 18 moves in the same number of years.

And many have dealt with a parent’s deployments, and the associated worry and fear, the first lady noted. But these challenges also have equipped them with a “resilience and sturdiness of spirit” that will prepare them for life’s setbacks and hardships, she added.

“A bad grade on a test, a bad day at work, that’s not going to knock you off your game,” Obama said, “because from a very young age, you all have been dealing with the big stuff, and that’s given you perspective.”

Military life not only has shaped their character, but also has broadened their minds, Obama said. As with most military children, the students here have lived across the country and the world, immersing themselves in new communities and cultures. This will serve them well in the future, she noted, as modern technology and the rise of a global economy increase the likelihood they’ll be exposed to a people of different cultures and backgrounds in their careers.

“You already have a skill set that so many employers are seeking,” the first lady said, “one that will position you for success both in the career you choose and the life you build for yourself with your family.”

Military kids also possess a sense of service -- to their families, their communities and their nation -- that’s inspiring, Obama said. They log hundreds of hours volunteering, serving as coaches, tutoring other students, picking up trash and working with organizations such as the Red Cross and Toys for Tots. And many move on to a life of military service.

“Service is the air that you breathe,” she said. “It’s how you were raised, and it’s the example you’re setting for others.”

Obama acknowledged the sacrifices military children are called on to make. They live with the reality of war, knowing that at any moment, their parent could be deployed halfway around the world. And when this happens, they must quickly adjust, she said, stepping up to help out at home, juggling activities and schoolwork, even while worried beyond measure.

“We know you’re sacrificing,” the first lady said, “but yet you’re an important part of the greater whole.” Military children understand that their parent is part of something far bigger than themselves, she said, and that their parent’s service keeps every American safe.

“You really are the greatest,” Obama told the seniors. “Your families know that. Our military leaders know that. I know that. My husband knows that. And we want every single American to know it as well.”

The first lady encouraged the seniors to share stories about their “extraordinary lives” with all they meet, “because, graduates, you all are an inspiration, you all are role models, not just for other military kids, but for all kids, for all adults, for all Americans who want to see what patriotism and sacrifice and service to country really look like.”

Obama also praised the students’ military parents, who carried out missions around the globe, yet still found time for bedtime stories over the phone and video chats. And their spouses ran households and juggled careers in the face of multiple deployments and moves.

“I have to tell you that as a mother, as a first lady and as an American, I am blown away by your strength,” she said. “I am inspired by your sacrifice. And I know that our graduates are so grateful for your unwavering love and support.”

Following her remarks, Obama helped to present the students’ diplomas. The first lady gave each senior a hug and posed for a picture as family and friends cheered in the crowd. She laughed and cheered them on too before stepping out to greet the military families in the audience.

Quantico senior Ashtyn Morgan was in tears as she left the auditorium, calling them “tears of joy.” The night was overwhelming, she said, between seeing the first lady and having her father, Marine Corps Master Sgt. Daniel Morgan, at her graduation despite five previous deployments.

Their presence “means the world to me,” she said.

Alexa Remington Lazar, a senior from Nile C. Kinnick High School in Japan, said she’s still in shock that the first lady attended her graduation. “I got to hug the first lady,” she said, still in her white cap and gown. “It was surreal.”

Lazar’s father, Navy Lt. Cmdr. Chuck Lazar, arrived from Japan two days ago. He had stayed behind after his family left to help with humanitarian efforts there. Lazar was thrilled to be at his daughter’s graduation and the fact that the first lady was there, he said, “was icing on the cake.”

Elaine Sanchez is an editor and writer for American Forces Press Services.