Cross-posted from the Let's Move! Blog.

Last Friday, just a week after the launch of Let’s Move! in Indian Country, First Lady Mrs. Obama and American Indian kids spent the afternoon in the White House kitchen garden planting the “three sisters” crops (corns, beans, and squash). The kids also helped Mrs. Obama harvest crops in the garden, including lettuces, rhubarb, chard, kohlrabi, sugar snap peas, turnips, broccoli and herbs – some of which will be used in Tuesday’s State Dinner in honor of German Chancellor Angela Merkel. 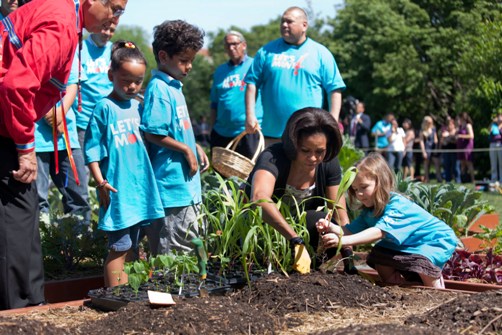 First Lady Michelle Obama participates in a Garden Harvest Event with children and members of the American Indian community, in the White House Kitchen Garden on the South Lawn of the White House, June 3, 2011. (Official White House Photo by Samantha Appleton)

This “three sisters” traditional Native American planting technique grows crops in a mutually beneficial manner: the corn provides a structure for the beans to climb, eliminating the need for poles; the beans provide the soil with nitrogen that the other plants use; and the squash spreads along the ground, blocking the sunlight and preventing weeds.

“Today’s a big day for us in the garden because it’s the first time we’re going to use native seeds of corn, beans and squash in the way they’ve been planted for thousands of years,” Mrs. Obama said. “We’re all pretty excited to continue this tradition.  This is another example of a fun, easy way that we all can work together to be healthier.  And that’s what we’re trying to accomplish with Let’s Move!”

Let’s Move! in Indian Country comes as a response to the current obesity trend within the American Indian community. American Indian or Alaska Native children between the ages of two and four have a higher prevalence of obesity (20.7% in 2009) than any other racial or ethnic group. Let’s Move! in Indian Country, in an effort to stem the tide of childhood obesity, brings together federal agencies, communities, nonprofits, corporate partners, schools and tribes to focus on four areas:

Check out the video of Friday’s garden event here.