June 8, 2011 at 2:20 PM ET by Katelyn Sabochik
Twitter Facebook Email
Summary:
President Obama visits Northern Virginia Community College in Alexandria, Virginia, discussed the importance of training and preparing our workforce to compete for manufacturing jobs across the nation, and announces new commitments as part of the Skills for America's Future initiative.

Today, President Obama visited Northern Virginia Community College in Alexandria, Virginia where he discussed the importance of training and preparing our workforce to compete for manufacturing jobs of the future.

In his remarks today, President Obama stressed the importance of matching the skills manufacturers need with curriculums at local community colleges, stating that the “goal isn’t just making sure that somebody has got a certificate or a diploma.  The goal is to make sure your degree helps you to get a promotion or a raise or a job.”

So today, we’re announcing several new commitments by the private sector, colleges, and the National Association of Manufacturers, to help make these partnerships a reality.  Through these efforts, we’re going to make it possible for 500,000 community college students -- half a million community college students -- to get industry-accepted credentials for manufacturing jobs that companies across America are looking to fill.  Because the irony is even though a lot of folks are looking for work, there are a lot of companies that are actually also looking for skilled workers.  There’s a mismatch that we can close.  And this partnership is a great way to do it.

So if you’re a company looking to hire, you’ll know exactly what kind of training went into a specific degree.  If you’re considering attending a community college, you’ll be able to know that the diploma you earn will be valuable when you hit the job market.  And a lot of that’s already happening here at NOVA.  If you participate in the GM program here, like David did, you can count on being prepared to work on GM cars. 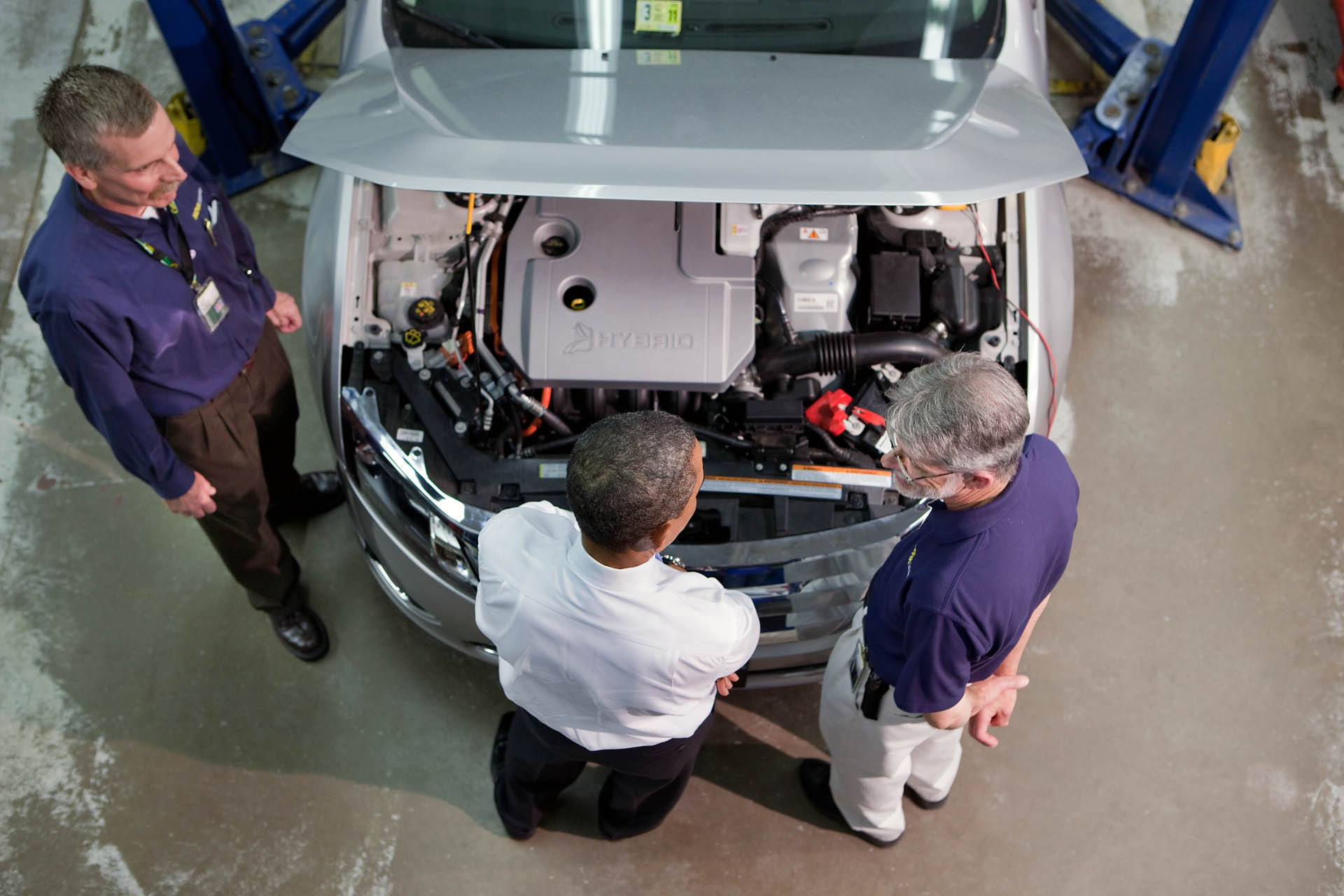 President Barack Obama looks under the hood of a hybrid car during a tour of the General Auto Lab at Northern Virginia Community College in Alexandria, Virginia. June 8, 2011. (by Chuck Kennedy)

The President also discussed the importance in investing in education, technology, and research in order to build a stronger economy in the long term:

Let me just make this point.  If we don’t decide to do this -- it’s possible that we could choose not to do the things that I just talked about.  We could choose not to make investments in clean energy or let tuition prices rise and force more Americans to give up on the American Dream.  We could choose to walk away from our community college system.  We could say to ourselves, you know what, given foreign competition and low wages overseas, manufacturing is out the door and there’s not much we can do about it.  We could decide, in solving our fiscal problems, that we can’t afford to make any of these investments, and those of us who’ve done very well don’t have to pay any more taxes in order to fund these investments.

But I want to make clear, that’s not our history.  That’s not who we are.  I don’t accept that future for the United States of America.  I see a United States where this nation is able to out-compete every country on Earth, where we continue to be the world’s engine for innovation and discovery.  I see a future where we train workers who make things here in the United States, and continue a important and honorable tradition of folks working with their hands, creating value, not just shuffling paper.  That’s part of what has built the American Dream. 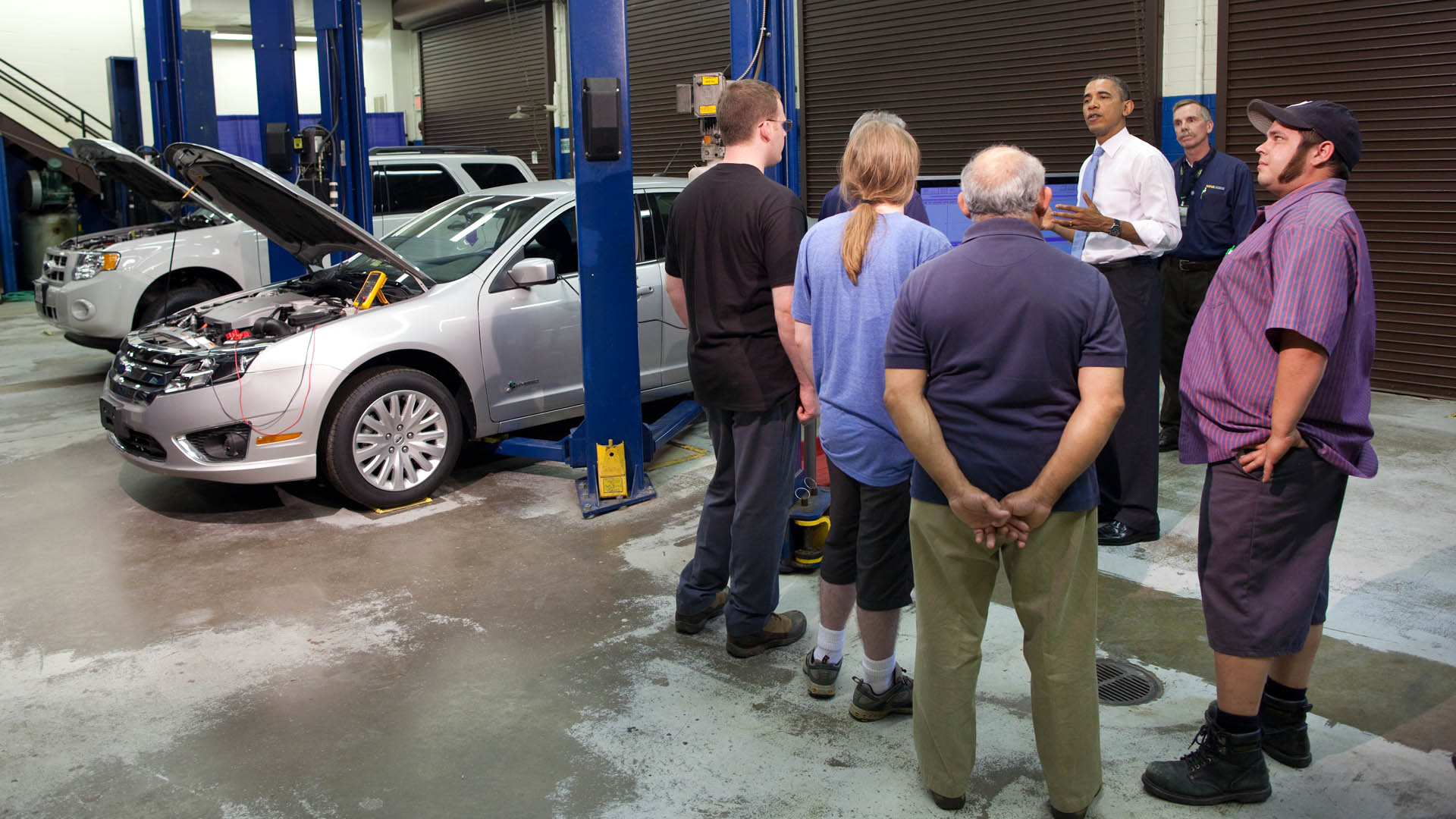