June 9, 2011 at 4:24 PM ET by Darienne Page
Twitter Facebook Email
Summary:
Iraq War veteran Troy Yocum, accompanied by his wife Mareike, and his dog, Emmie, has walked thousands of miles across the United States to raise awareness for veterans and military families.

Troy Yocum returned from Iraq in the Summer of 2009 with one thought on his mind: he had to do more. While deployed, he had received a letter from a friend who’d been laid off and was in need of help. Troy found help for his friend, but knew that there were many other veterans and military families out there in need. He wanted to do something for them, too. So he pulled out a map. “I drew a line from Lexington [Kentucky] to Louisville [Kentucky],” he said. He thought that by walking between two cities in his home state, he could help raise money and awareness for veterans and military families in need. “But then I said, I need to go bigger than that – what if I walked across the country and back in one single trek?”

And for the last 14 months, that’s exactly what he’s done. Troy, accompanied by his wife Mareike, and his dog, Emmie, has walked thousands of miles across the United States and back, and is now on the final leg of his journey. In every town, he stops and talks with people about his mission to assist military families in need. Along the way he’s persevered through setbacks and injuries. “I’ve taken 32 million steps to get to where I am now, but it’s all worth it.” Along the way, he blogs about his travels and collects donations on his web site.

Troy’s cause has garnered attention all across the country. Corporations such as Modell’s, Green Bean Coffee, and others have lined up to support him. “They were all very open to my idea. It’s time to help military families, and these organizations want to pitch in.” He’s been interviewed in national news outlets and honored at baseball games. “I’ve met Diane Sawyer, Jay Leno, and all sorts of celebrities – but the single best moment was when I was able to make my very first donation to a family in need,” Troy said. “I’d been walking for three or four months, and donations had been trickling in, and we finally raised enough money to help a National Guard family with the medical bills for their daughter.” Since then, he has raised enough money to help 40 military families, with more being added to the list all the time. Troy says doing something so simple that has been able to make such a big difference gives him a great feeling. 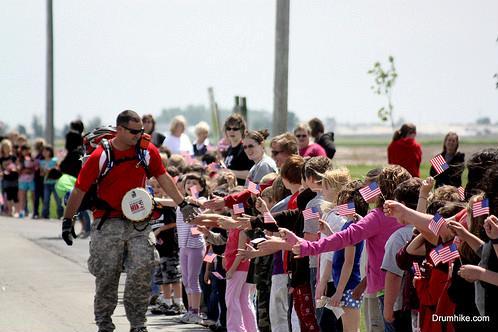 Troy’s hike will conclude where it began – in Louisville, Kentucky – on September 3rd, 2011. Today he is walking through Delaware and Pennsylvania en route to New York before he turns around to head back home. You can follow his progress and donate to his cause on his website, drumhike.com. Troy hopes that everyone will get involved, in whatever way they can, in providing support and opportunities to veterans and military families. “I decided to help military families by taking 40 million steps across America, but all Americans can take steps to help military families by pitching in in their own communities,” he said.

Troy’s selfless service is exactly the type of engagement that the First Lady and Dr. Biden’s Joining Forces initiative was designed to encourage. Joining Forces is about everyday citizens finding ways to support and provide opportunities for veterans and military families. Not everyone can walk across the country and back, but everyone can get involved – whether by volunteering with veterans assistance organizations or just spending time with military families in your neighborhood. To see more ways that you can help support our troops and their families, check out our Get Involved page.