June 10, 2011 at 12:58 PM ET by Kellyn Blossom
Twitter Facebook Email
Summary:
The White House celebrates the one year anniversary of Let's Move! Cities & Towns by highlighting what cities around the country are doing to promote healthy lifestyles.

This week, the White House celebrates the one-year anniversary of Let’s Move! Cities & Towns – a call to action from First Lady Michelle Obama to engage mayors and local elected leaders in solving the problem of childhood obesity within a generation. As the First Lady explains, “The idea here is very simple: to put in place commonsense, innovative solutions that empower families and communities to make healthy decisions for their kids.” Let’s Move! emphasizes the unique ability of communities to solve the challenge locally, and the critical leadership mayors and other local elected officials can provide to bring communities together and spur action.

Health and Human Services Secretary Kathleen Sebelius launched Let’s Move! Cities & Towns at the U.S. Conference of Mayors Annual Meeting last year: “We recognize that every community is different, and every town requires a distinct approach.  We designed Let’s Move! Cities & Towns to empower local leaders to take steps that will have a real impact on their own unique communities, whether that’s building sidewalks and parks, supporting local farmers markets or bringing healthier food into schools.”

Below, we highlight a few of the many local elected officials around the country who have answered the First Lady’s call and are taking action on the four pillars of Let’s Move!: helping parents make healthy choices, creating healthy schools, providing access to healthy and affordable food, and promoting physical activity. 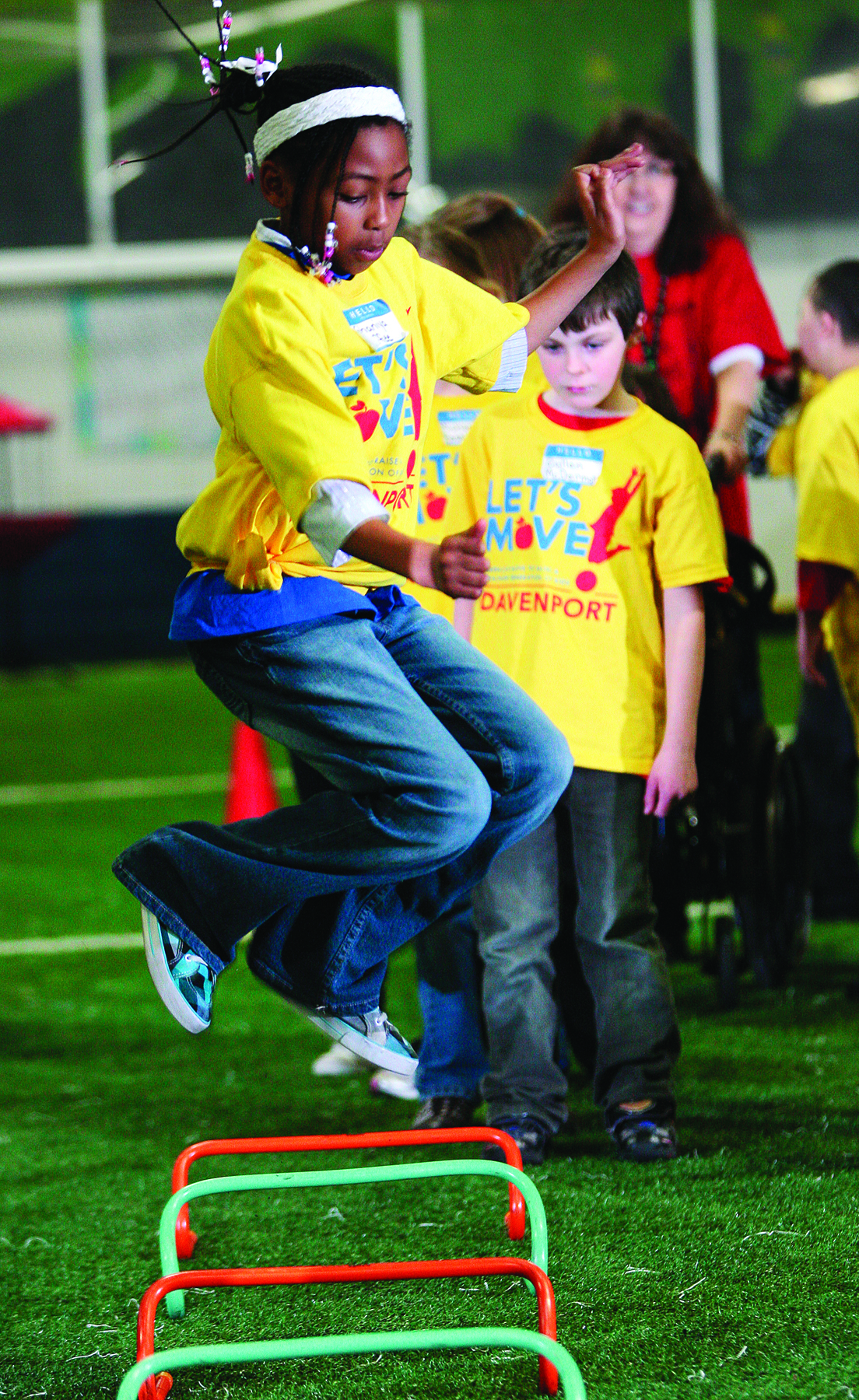 Mayor Bill Gluba helped kick-off Davenport, Iowa’s  Let’s Move! initiative with an event at the River’s Edge recreational facility last May. The event showcased the Mobile Playground program that is carried to neighborhood parks throughout the City on a decommissioned Fire Truck loaded with crafts, games, sports and hobbies. The program targets parks in neighborhoods where kids have less access to recreational programs and parents may not be able to provide transportation to other facilities.

Cambridge, Massachusetts encourages school children to follow the “5-2-1” guidelines (five or more servings of fruit and vegetables, two hours or less of television time, and one hour of exercise). Cambridge Mayor David P. Maher: “The Let’s Move!  campaign complements the efforts that City has been undertaking with our youth and brings to the forefront the importance of physical activity and healthy eating.  By joining the First Lady’s Initiative, the City of Cambridge is providing yet another tool to assist our youth in leading healthy lives.”

In Seattle, Washington the Mayor’s Office of Economic Development assists local corner stores in providing more fruits and vegetables in low income communities. This is making it easier to grow healthy food in the city by building more community gardens, which provide 30,000 pounds of fresh local produce to residents in need, and by making it easier for residents to grow food themselves. The city is also providing food from local farms to childcare and senior programs, and creating community kitchens where people can learn to prepare food. Mayor Mike McGinn: “Let’s Move! allows us to give more help to our children and their families so they can have healthy choices too.”

Southfield, Michigan’s Mayor Brenda L. Lawrence began a summer Mayors Walk program during her first year in office ten years ago.  Over the years, more than 600 residents have taken advantage of this opportunity to participate in healthy exercise as they meet new people and interact with Southfield elected officials and department heads. The Let’s Move! program provided an opportunity to reach out to the city’s youth and introduce them to the benefits and fun of physical exercise and making healthy food choices.

If your city, town or county has not yet joined Let’s Move!, download the toolkit for local officials and sign up online to join the growing list of participating cities, towns and counties.