June 13, 2011 at 7:17 PM ET by Erin Lindsay
Twitter Facebook Email
Summary:
President Obama travels to Durham, NC to meet with the Jobs and Competitiveness Council at the corporate and U.S. manufacturing headquarters of Cree, a leading manufacturer of energy efficient LED lighting.

Today, President Obama traveled to Durham, NC to meet with the Jobs and Competitiveness Council at the corporate and U.S. manufacturing headquarters of Cree, a leading manufacturer of energy efficient LED lighting.  While at Cree, the President toured the company’s LED lighting product assembly facility, met with the Jobs Council and delivered remarks to Cree employees, Jobs Council members, local business owners and representatives from nearby engineering colleges and universities.

The President’s Council on Jobs and Competitiveness is led by GE Chairman and CEO Jeff Immelt and is composed of representatives from various sectors of the economy andleaders in diverse industries -- people running large and small companies that represent millions of Americans helping the economy run every single day. The Jobs Council held their first meeting at the White House on February 24, 2011.  At that time the Council committed to holding their second meeting outside of Washington, DC.  Cree’s facility, located in the heart of North Carolina’s Research Triangle Park area, was selected to hold the second meeting. 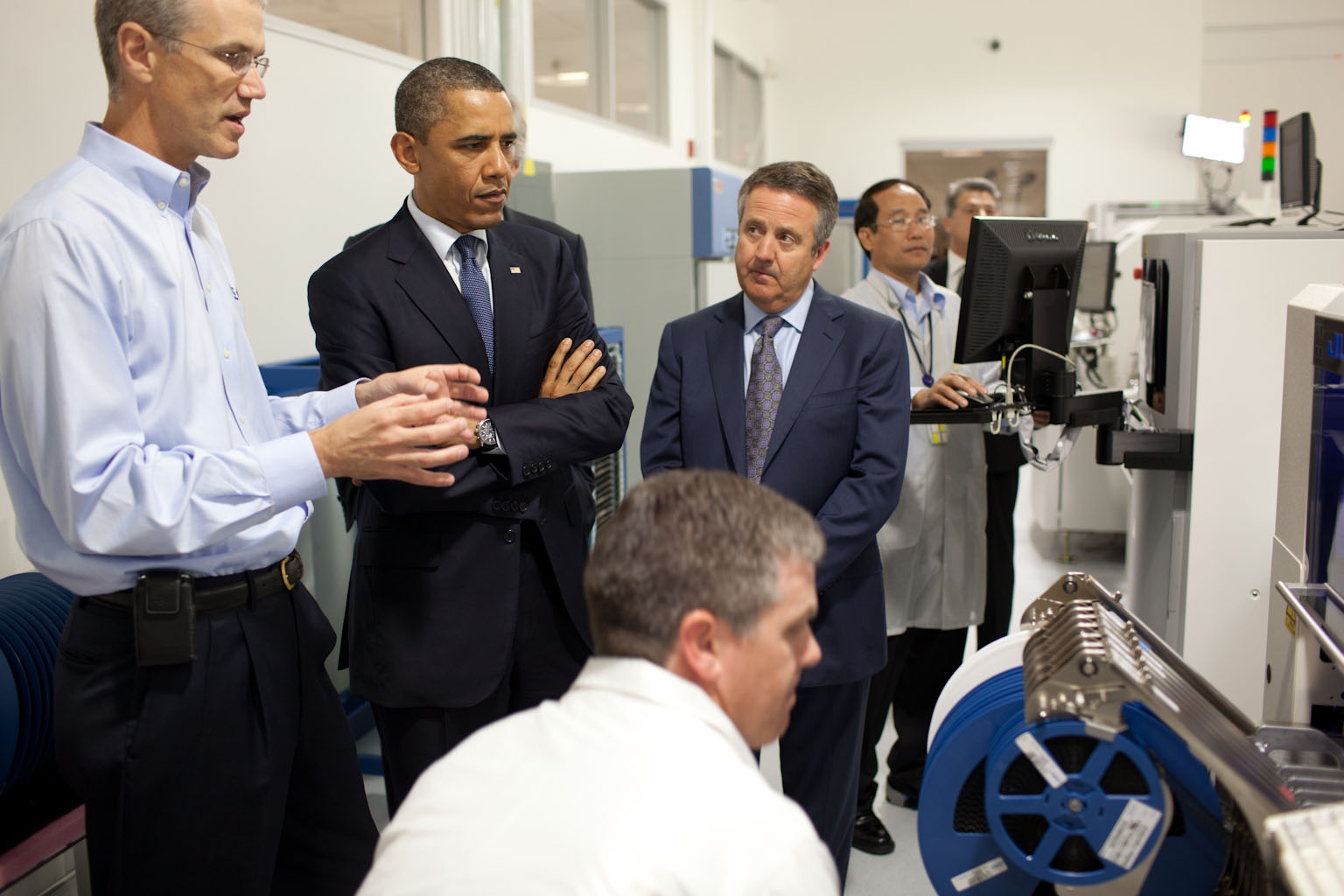 In his remarks today, the President commended Cree for exemplifying the potential of American innovation, manufacturing and advanced technology:

Today the small business that a group of N.C. State engineering students founded almost 25 years ago is a global company.  It’s got 5,000 employees.  Next month, your new production line will begin running 24/7.  And soon you’ll add another 400,000 square feet of space on a new site next door.  So you’re helping to lead a clean energy revolution.  You’re helping lead the comeback of American manufacturing.  This is a company where the future will be won.

He also discussed the role of his Council on Jobs and Competitiveness and detailed some of the recommendations to address short-term, medium-term and long term economic growth and job creation that they presented to him today:

And today, with the leadership of the Jobs Council, we’re announcing an all-hands-on-deck strategy to train 10,000 new American engineers every year.  So -- and by the way, our Jobs Council, led by Jeff Immelt, they’re doing this not counting on a whole bunch of federal funding.  Private sector companies are teaming up to help us promote STEM education, to offer students incentives to finish those degrees, and then to help universities fund those programs.  They’re going to double their summer internship hiring.

We’re talking about companies like Intel, whose CEO Paul Otellini is here today.  And Paul is heading up our task force for the Jobs Council in helping to figure this out, because he understands Intel’s survival depends on our ability to get a steady stream of engineers.  I’ve been, by the way, to the Intel plant out in Oregon.  It is unbelievable.  It’s out of -- something out of science fiction.  And I pretended like I understood what they were saying the whole time.

But that’s what’s going to drive our competitiveness in the future.  We know that if we’re going to maintain our leadership in technology and innovation, our best companies need the world’s brightest workers –- American workers.

Now, that brings me to a second idea that we discussed backstage.  At Cree, you’re putting people back to work in a field that has the potential to create an untold number of new jobs and new businesses right here in America -– and that’s clean energy.  And my administration has invested heavily in clean energy manufacturing, because I want to see the LEDs and solar panels and wind turbines and electric cars of tomorrow made right here in the U.S of A.  I want them made right here.

We invested in this company with a tax credit that allowed you to boost capacity and lower costs and hire hundreds of new workers.  And with a grant from the Department of Energy, you’ve made incredible breakthroughs in smart grid technology to transmit clean, renewable energy across the country more efficiently at less cost.

Now, breakthroughs like these have the potential to create new jobs in other sectors of the economy as well.  Think about it.  Cree makes energy-efficient lighting that can save businesses and consumers a lot of money.  And there are a lot of buildings out there that need upgrading.  And there are a lot of workers ready to do the upgrades.  Construction workers were hit harder than anybody by recession.  Almost one in six construction workers are out of work.  And that makes no sense at a time when we’ve got so much of America that needs to be rebuilt.

So this is what led us to create what we’re calling the Better Buildings Initiative -– putting people back to work doing the work that America needs done.  Upgrading buildings for energy efficiency could save America’s businesses up to $40 billion a year on their utility bills.  And obviously that $40 billion could be better spent growing and hiring new workers.  It will boost manufacturing of energy-efficient products like those made here at Cree.  It will put contractors and construction workers back on the job.  It is a win-win-win-win proposition.

So today, the members of my job council updated me on their efforts to push this initiative in the private sector.  And they’re working closely with a champion for this kind of energy innovation, President Bill Clinton, who I asked to co-lead the effort with them.

With fifteen straight months of private sector job creation and seven straight quarters of growth we are moving in the right direction, but the President is not satisfied with the pace of job creation and we all agree that there is more that can be done to accelerate job growth.

Additionally, the president acknowledged that these ideas aren’t solutions to every problem we face, but stressed that:

Slowly, steadily, they’re helping us to move forward.  We’re going to pursue these ideas and any good ideas that are out there, no matter where they come from.  Because even though this is a big country with a great diversity of opinion -- as you discover when you’re President -- we won’t agree with each other on everything, we can agree on some basic things.

We can agree on educating our children and training our workers to be the best in the world.  We should be able to agree on investing in the research and technology that leads to new ideas and new industries.  We should be able to agree on developing clean energy and manufacturing jobs that come with it.  It makes sense for us to rebuild our infrastructure and all the jobs that it can create.  That’s what’s going to be required to grow our economy.  That’s what it takes to help our people prosper.  That’s how we’re going to get to the future that we dream about for our children and our grandchildren. 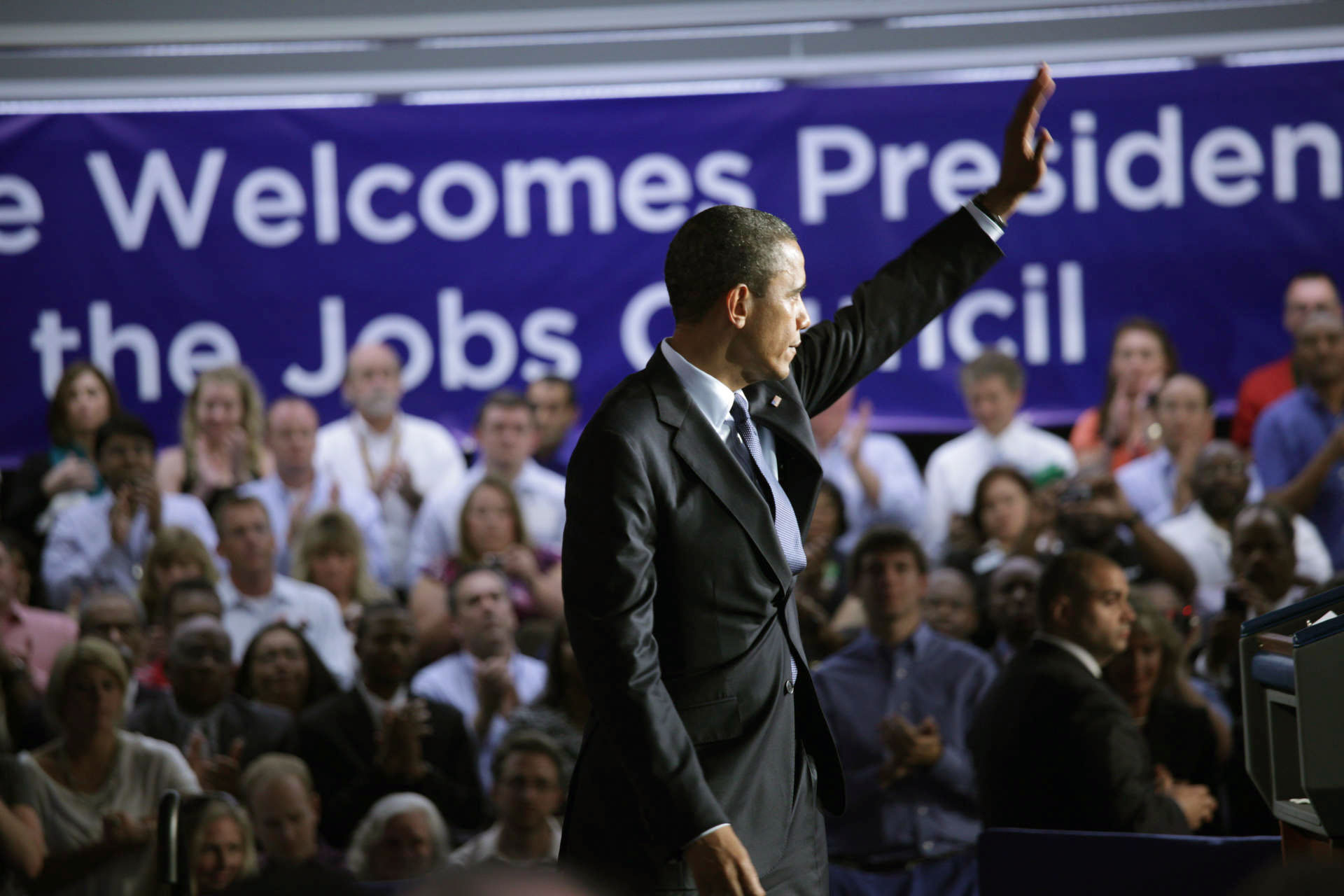 For more information about the Council’s recommendations, visit jobs-council.com, where you can find a summary of ideas that were presented to the President today.